Hurricane Irma is heading towards the US. The path was uncertain so to prepare Duke Energy decided to lower the level of Lake Wylie. They start to let the water out at 12:01 that morning.

Our plan was to kayak from the Fort Mill dam to Highway 9 bridge. This is approximately 30 miles. The Catawba river is being raised to empty lake Wylie. The warning signs made it sound dangerous. The possibility of swift water was a concern. It was just in fact the Catawba river. We float down it on tubes. Why would the water matter?

i put it out on Facebook asking people if they think it’s gonna be dangerous. Everyone said to wait until another weekend.  I’m not sure why I asked we were gonna do what We wanted anyway!

So Lisa and I, Thelma and Louise, decide we are going anyway but decide to leave from River walk just in case. Lisa wants to leave from River park but I peer  pressure her into river walk. We just cut our trip by 3.5 miles by not putting in at the dam.

The water is super high. There is hardly a rock in site.

It was 10:15 and no one else was around. We unloaded the kayaks decided we would actually wear our life jackets and took off.

It was 3 miles to river park. I guess because of Irma the wind was against us.  If the water was swift, the wind was clearly pushing us back. We had to fight the wind. I immediately started whining about how hard it was. Of course this is when she reminds me it was my idea to start at river walk!

At one point Lisa is in front of me she faces upstream and starts paddling. She isn’t going anywhere. It was like jogging in place!

The next stop was 7 miles down to the new put out at the reservation. Most people don’t know about this one. It opened just recently.  This was about the place the river turned and we quit fighting the wind. We paddled and talked and laughed. The sun was shinning and It was a beautiful day!

The next put in is at Landsford Canal. It is 10 miles from the Catawba Indian Reservation.  Shortly after passing here the river thankfully makes a turn so that for the time being the wind is not against us!

Of course I am winey because paddling against the wind is hard but when Lisa says her arms hurt I am elated!  Cause if it’s tough for her than I’m not a big baby!

i have never been on this part of the river. We are coming up on Lisa’s workplace, Bowater. We go under the highway 5 bridge. We call mike to let him know where we are and to pick us up at Landsford canal, even though neither of us know how much farther it is.

It’s pretty cool because we paddle behind bowater and can see the plant, the intakes and the release. Weird thing about this stretch is that we start seeing lots of balls on the side of the river. Basketballs, volleyballs, cheap Kmart balls. It’s weird because this is a very uninhabited part of the river. 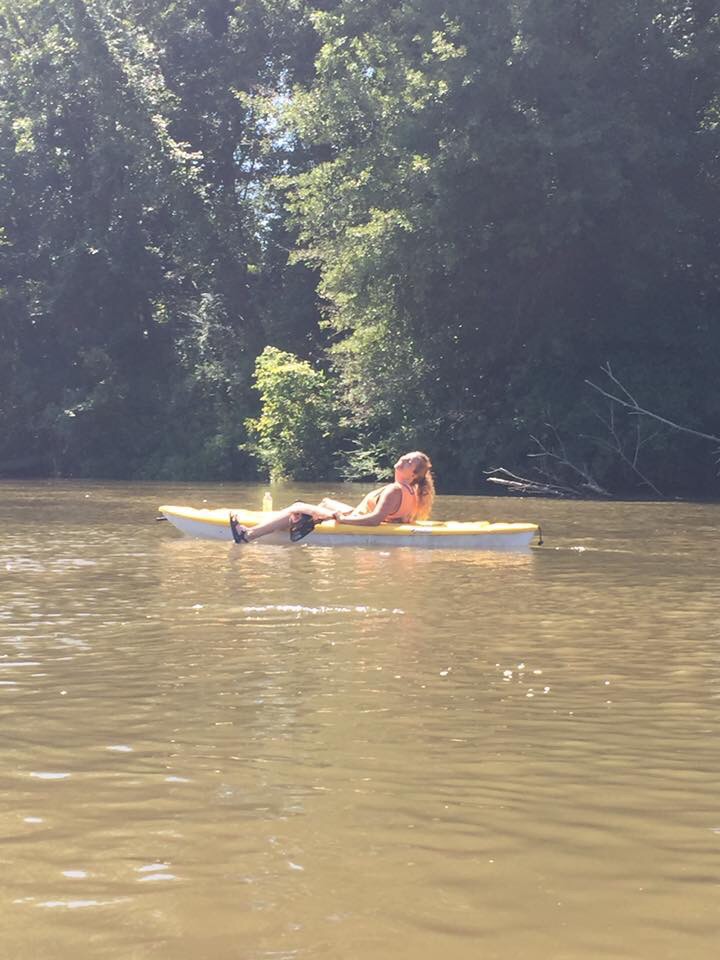 We have been paddling forever so it’s time to chill a bit. I didn’t get my camera out in time but there were 2 big goats 🐐 on the river bank that appeared to be watching us.

We keep paddling and come to a fork in the river. It goes straight and to the left. Left we can hear some whitewater. I would like to go that way but one – it seams like the wrong way and 2- my arms are like spaghetti! I need to get off this river! We keep paddling and there is it! Landsford canal. We pull off take some selfies and try to decide weather we want to finish the last 3 miles to highway 9 or not. I came Mike and he is already on his way and my arms are killing me so we stay.

We never saw a single person on the whole trip. Just a whole lot of basket balls.

One thought on “Kayaking the Catawba River”