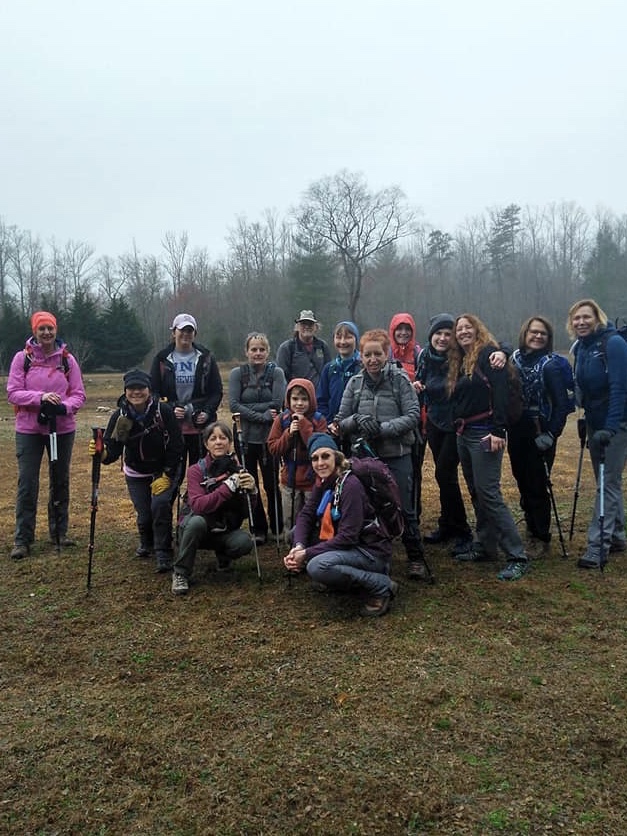 Brandi moved her hike up a week and it turned out to be a perfect day! It started out very foggy. I took this picture on Lake James just before meeting everyone. 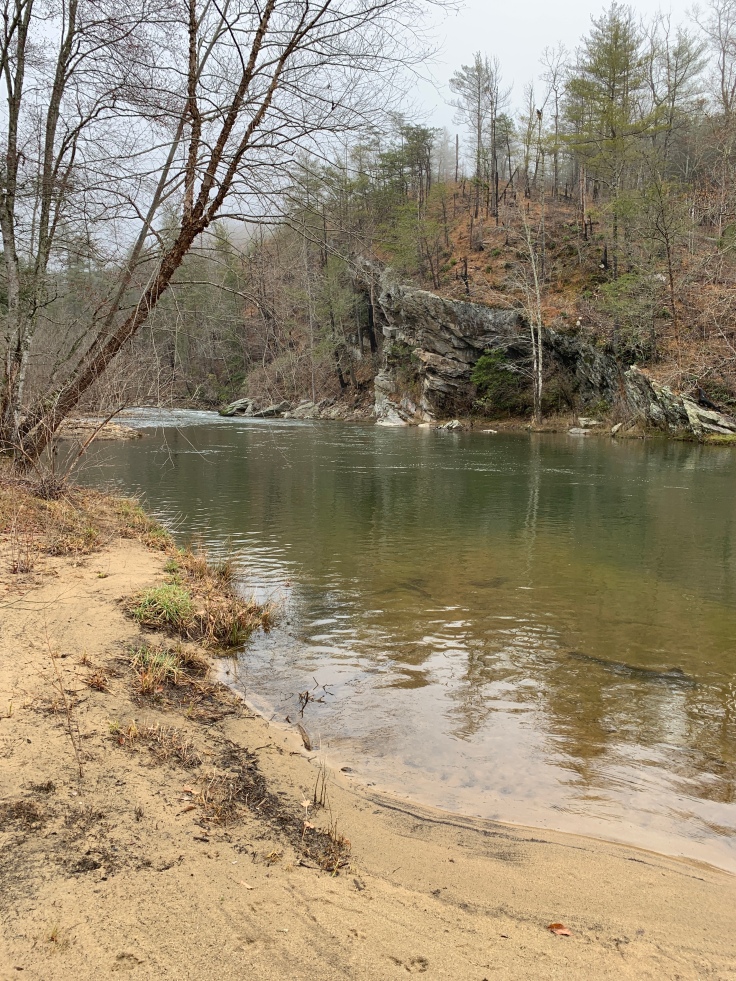 We followed the trail which was an almost always upward trek! It didn’t take long for us to start shedding some layers. Denise said we should be seeing beautiful views of Shortoff but it was too foggy. As we walked the blue skies started showing. After a bit we got a nice view of Shortoff. 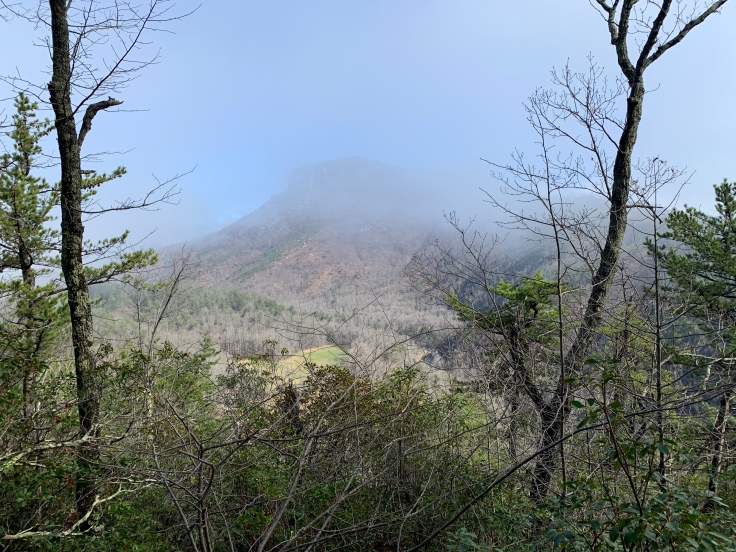 We had lots more uphill hike. It was a nice trail. Through some rhododendron tunnels. We stayed on the MST about 2 miles and the Pinnacle Trail intersects. This is a popular place to come down to hike to the daffodils. 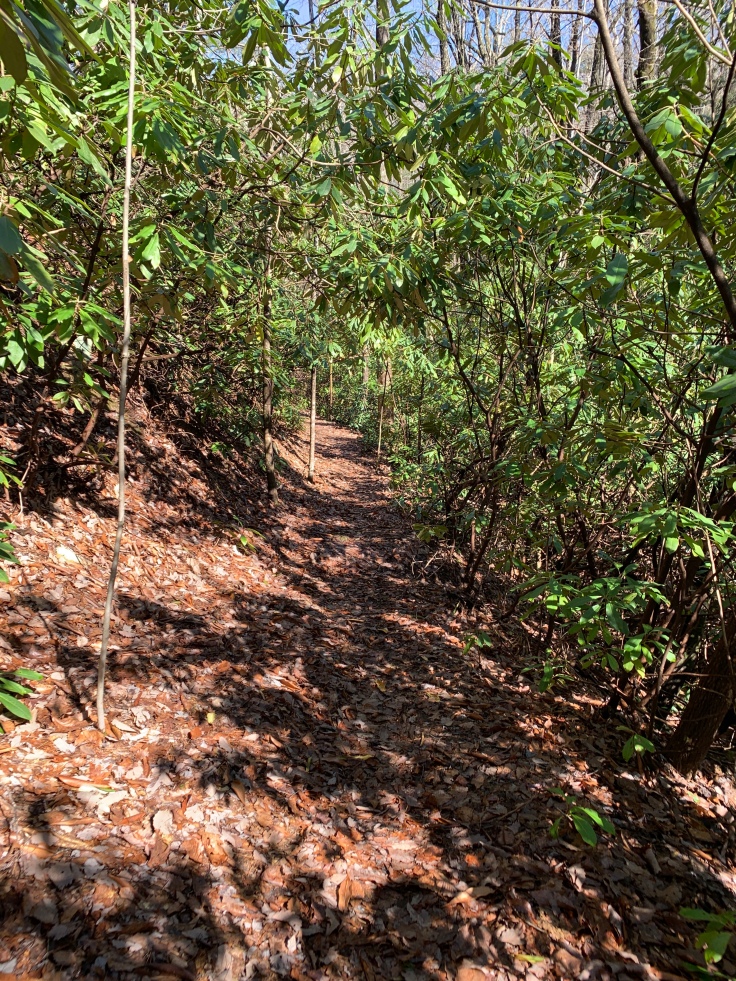 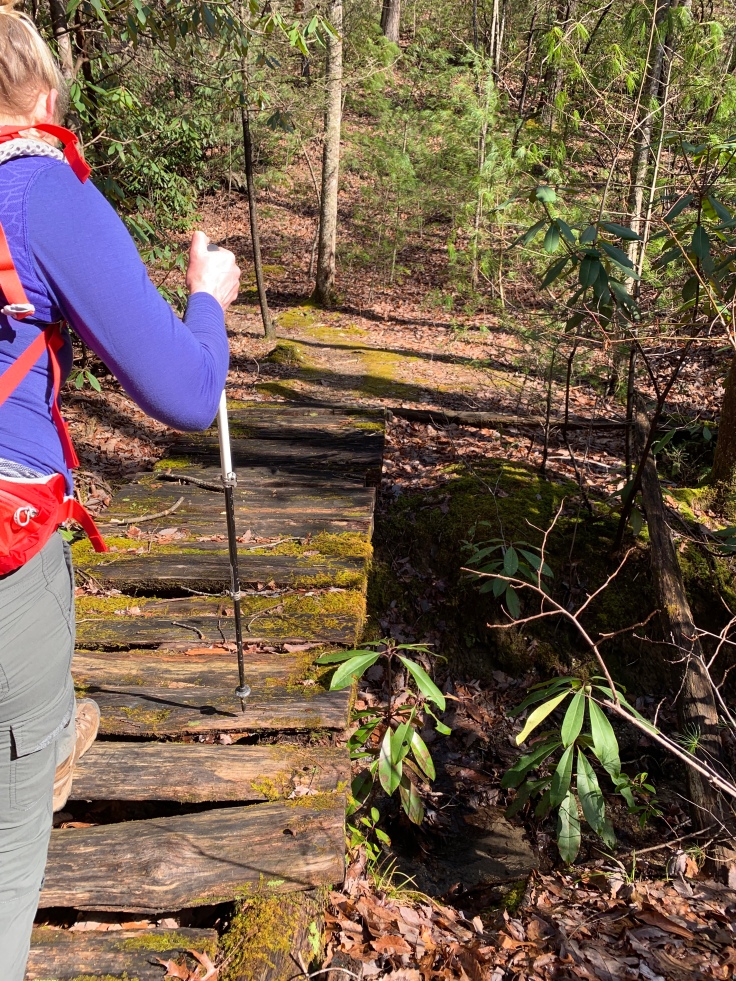 Two women came down here and merged in with our group. Shortly after this intersection we turned on the Leadmine Trail. This trail was pretty difficult. Some places really difficult. Our group got very spread out here.

This trail goes up and down and around. It’s pretty high above the river. The trail gets steep and narrow. It was slick in places from all the rain. 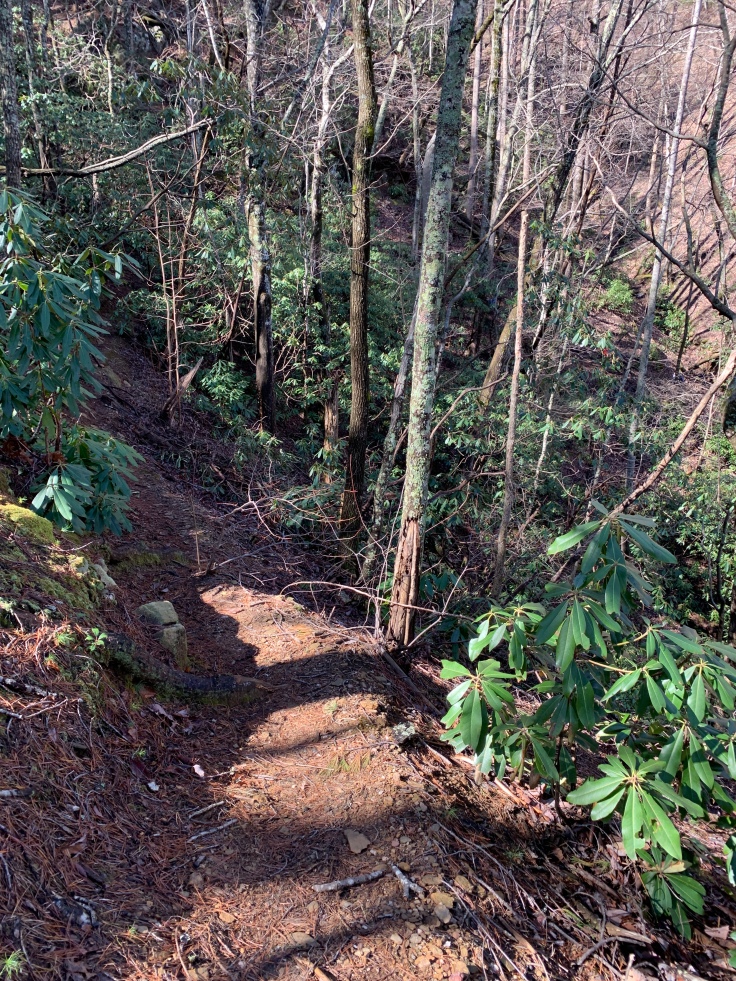 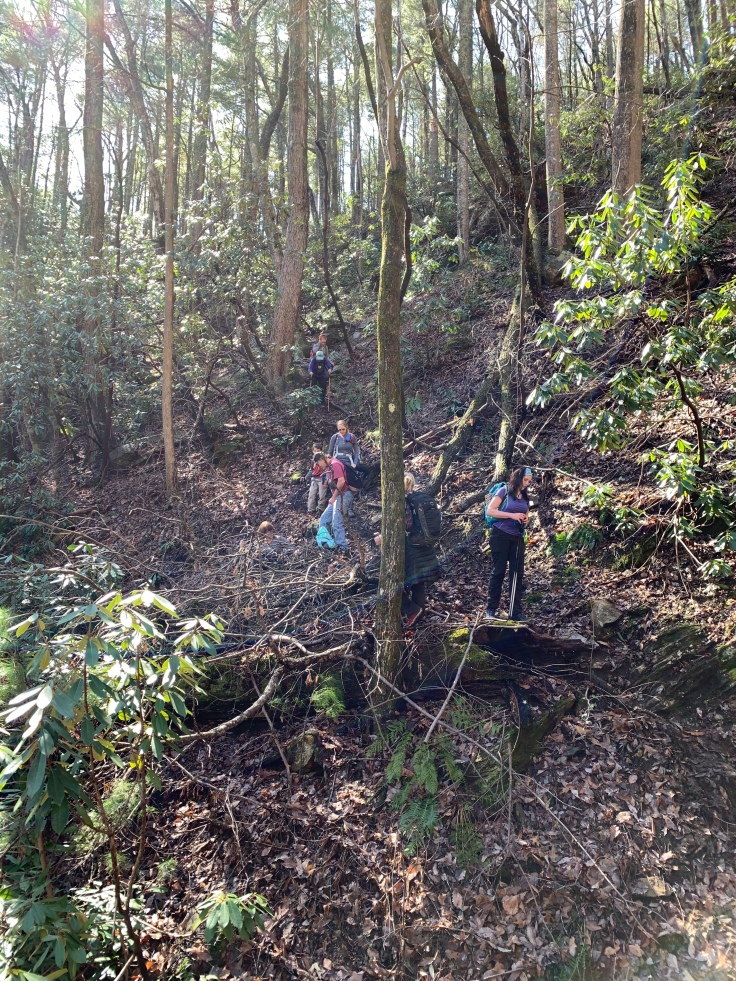 Brandi and I were rounding the trail and I saw a hiker up the trail from us take a tumble off the trail. She basically did a sideways summersault. She had some others around her. As we arrived it turned out to be one of the girls who came in off the Pinnacle Trail. As we arrived where she was she was still sitting where she fell. She said she was ok but shaken.

I kept going but some stayed behind to make sure she was ok. Next we crossed a creek and kept going up. Around the next turn I could see some of our group waiting for others to catch up. 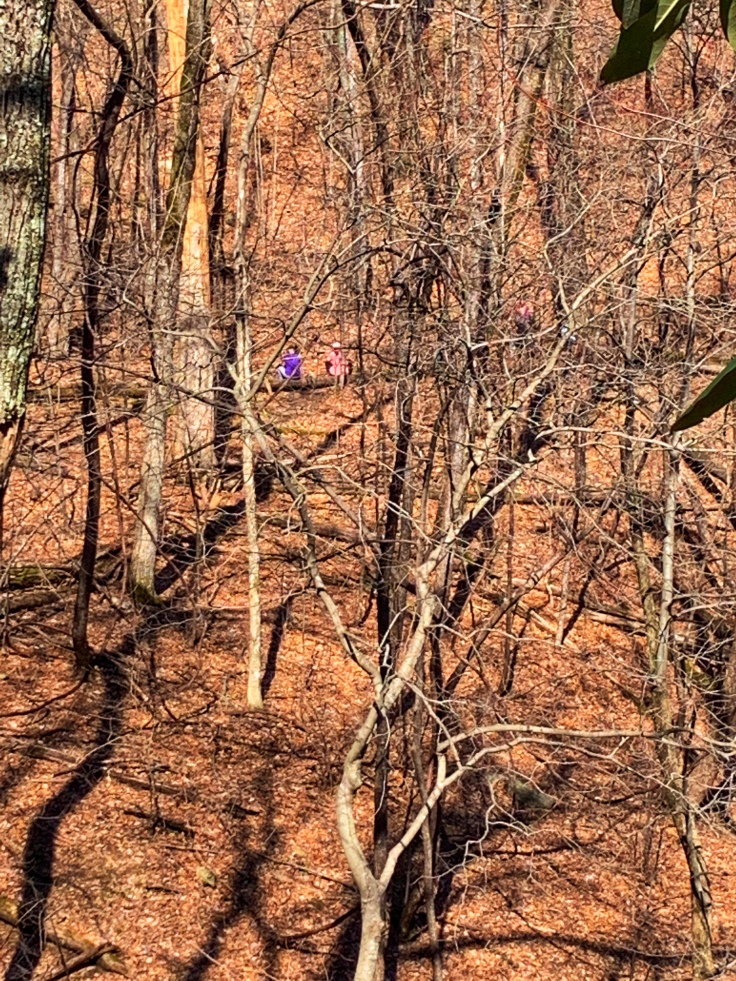 The trail wound around to them. I explained there was a girl hurt and the others were helping her. After a short break we all continued. We were very high above the river and now this trail was going way down. The trail was very steep. It basically went straight down to the river.

We got to the river and waited at a campsite. Some of the girls were in a big hurry to get to the daffodils. I guess they thought they were gonna run out of daylight. They didn’t want to wait for the others and kept going. There was actually service and I called Brandi to see where they were. Turns out the girl who fell was really hurt. Brandi and Christy had just taken NOLS training and stabilized her leg by wrapping it up with her pole sweatshirt and poles. Then taping it up also.

Leighann and her son called for a rescue, gave their coordinates and stayed behind with her and her friend. It’s a long way down from the road, I think a mile and a half down Pinnacle and over to where she was. It was probably gonna take awhile for rescue to get to the trailhead then a mile and a half down.

Just as we were leaving the river I noticed people coming down that steep hill. It was Brandi and Denise and the rest of them. The other girls left and I waited for them. We got the full scoop on the girl who was hurt. She was wearing regular tennis shoes that maybe the reason she slipped. It was a very slick section there! Hiking shoes or boots are very important especially in the gorge!

We headed along the river toward the daffodils. A lot of blow downs on this section. This was my favorite picture of the day. I think it was taken at Blue Hole.

The trail was still going up and down and over blowdowns and creeks. 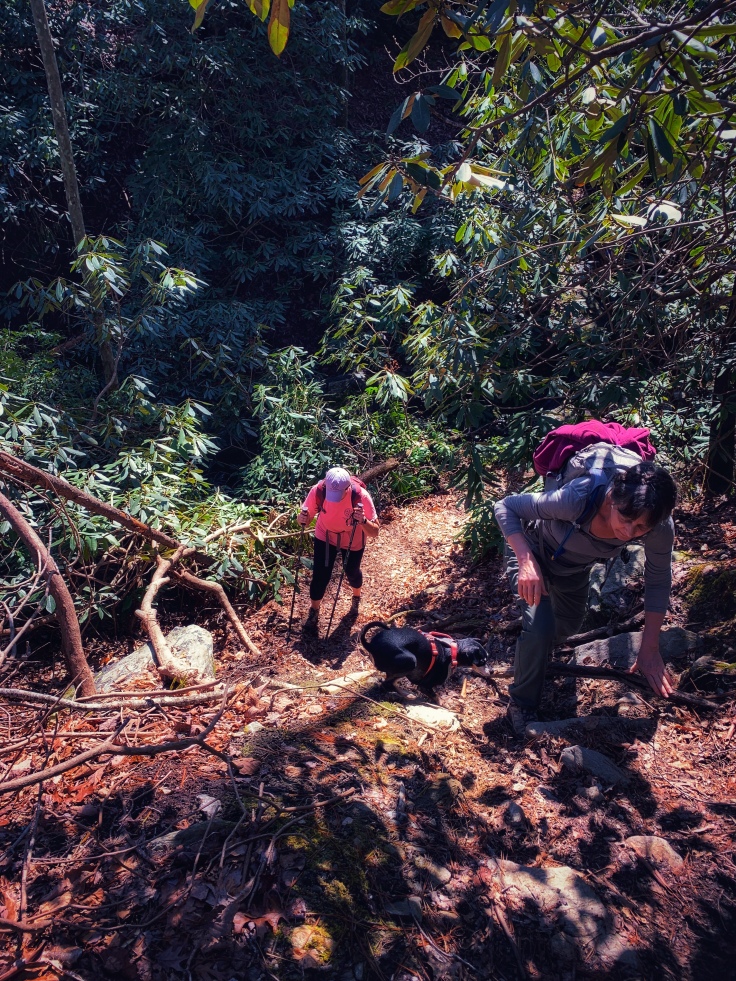 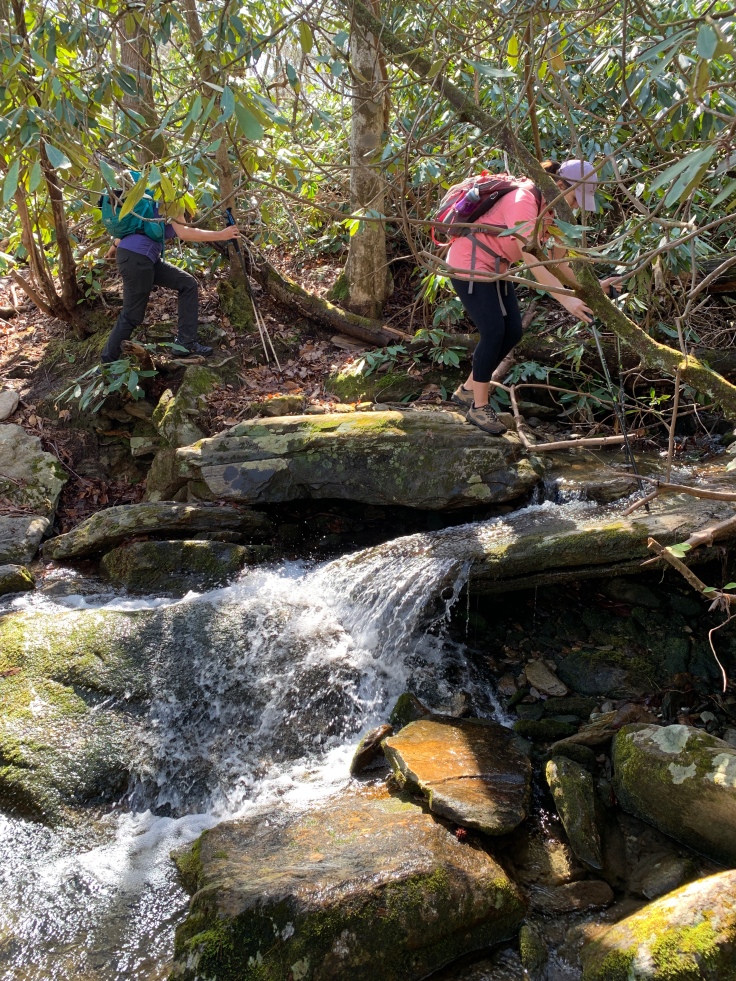 Then we arrived at the daffodils. I was surprised at the number of people down there. It was about an acre of land and very few trees and no underbrush. It was full of daffodils. Denise said the old homesite was on the far right. In the first picture is actually some of the stone pillars of the house. I understand her grandmother planted the flowers which have multiplied over the last hundred years. I can’t see how they got here to settle. I don’t even think horses could make it down here! We had some lunch and took some pics.

I managed to get pics without too many people in them. This is Christy and Brandi showing they have hiking legs and upper body strength as well as a tight tummy! 😁

I’d probably go crashing down on my head. Some of the girls were ready to go. We were trying to decide weather to go back the way we came or up Unnamed trail. 5 miles back or 1 mile straight up! It’s difficult to get 12 or so girls to hike in sync! We should of let them go And enjoyed it a bit more but we all packed up and took out last couple of pics and left.

Brandi new that Unnamed Trail wasn’t much harder and not any more treacherous than Leadmine so we went that way. I think 4 girls went back the way we came. Unnamed trail was definitely the shortest route to the daffodils. Only 1 mile up and a 29% grade. It had some beautiful views from the trail. We all got separated again. Kathy and I hiked together. She is 60 something years old two new hips and I never heard her breath hard! Girl is strong! Honestly I think she only rested when I need to! 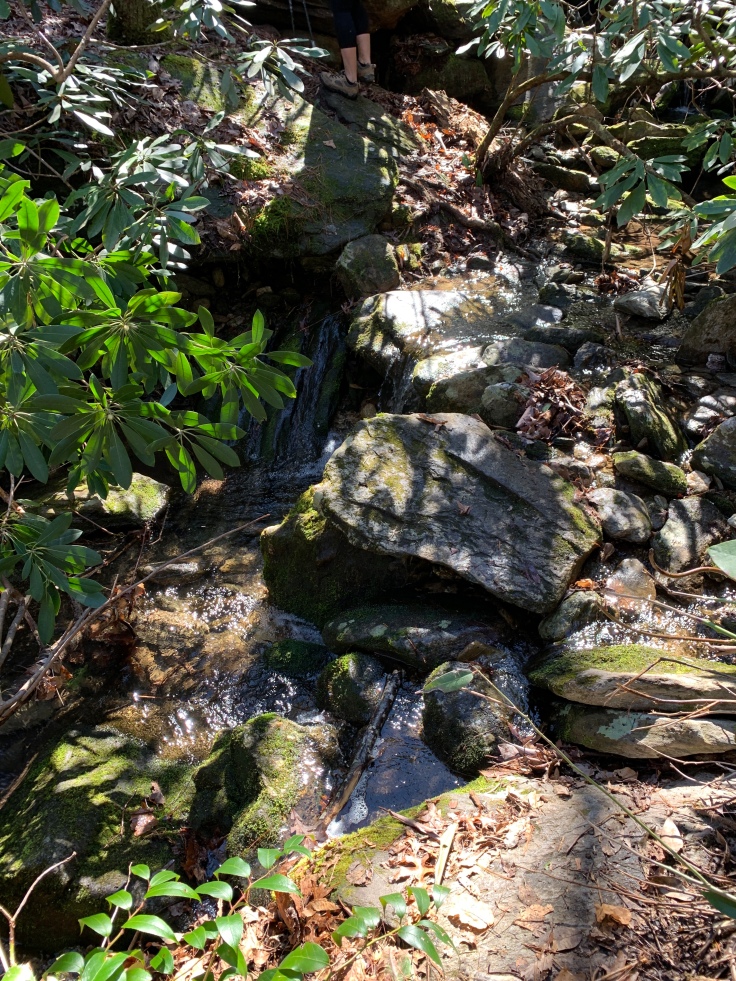 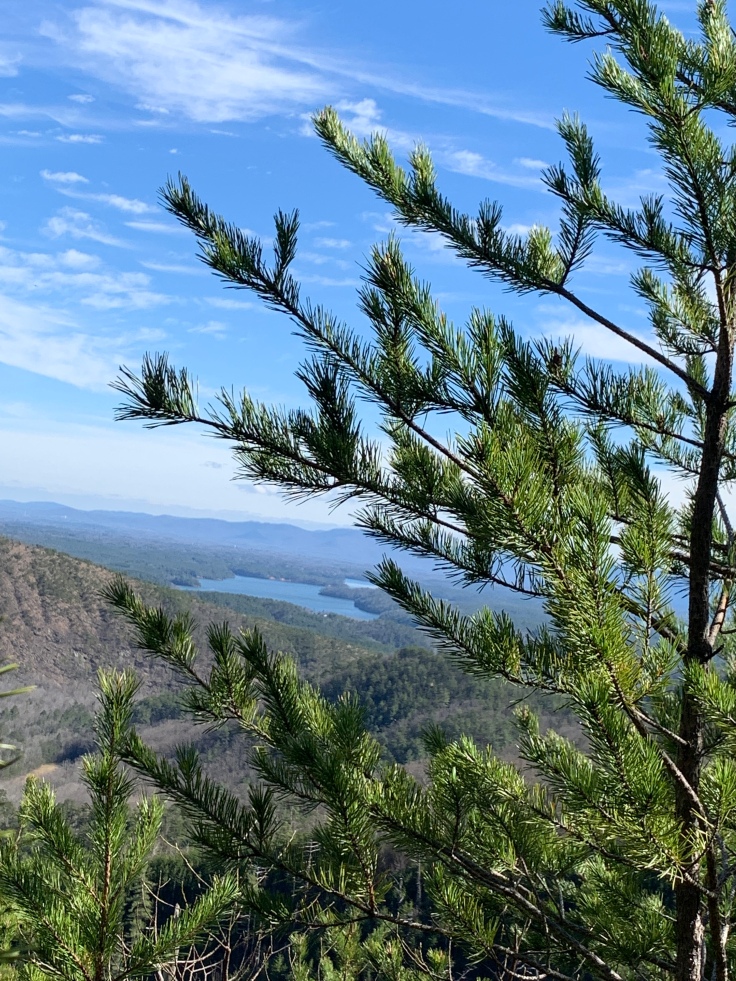 She said she didn’t like to tell her age but I said I’d be so proud. How many people could do what she does? She named a girl in the group and I said ok 1! I swear I’d be like hey I’m 60 something I can kick your butt! 😁 Denise is the other 60 something out there kicking butt!

On my Avenza map I see Dillinger falls is off to the left. I can hear it. I’m looking for the trail and I think i’ve found it. I started down it but then decided I really didn’t know for sure what I would be getting into and I should stick with the group. Next time!

We spotted some of the girls above us on a rock out cropping. Almost there! We kept pushing on. Someone had put a rope up toward the top it felt like a 90 degree angle here!

Brandi called and said they were half way up. Gotta have Verizon in the gorge! I made it to the top! Whew! It was about 3:30. This young guy came by and wanted to know how to get down to the daffodils. We discouraged him and told him at least get a headlamp. After seeing the ropes he decided against it. It was cold in the wind so we went out and sat on 105. That guy said the paramedics were still back at Pinnacle.

Turns out that’s how long it took to get that girl out! Our friend Nick posted some pics of the amazing rescue crew. 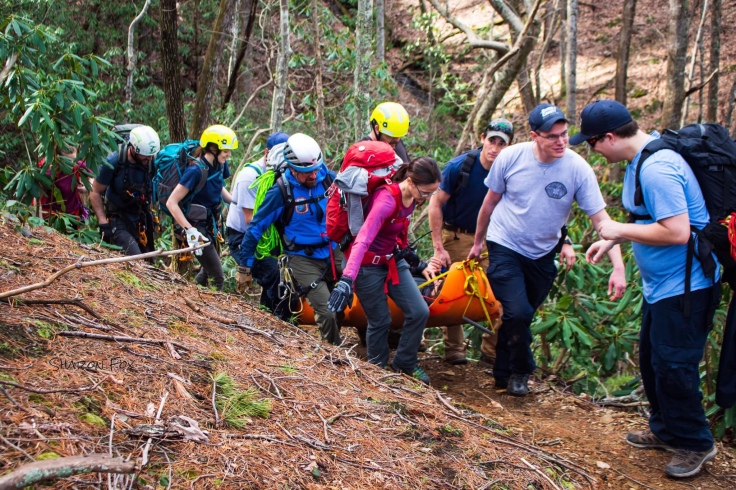 Brandi, Denise and Lindsay arrived and Denise’s husband came and picked us up to take us back to our cars. Haven’t rode in the back of a pick up in forever!

We got back to our cars just 5 minutes before Lisa and Robin arrived. They had walked back the 5 mile way.

Such a great day hiking in the Gorge with some great people!

Update: the girl who was rescued is going for a MRI this week. Her leg isn’t broken but she definitely hurt something. She can’t stand on it at all. She also said the EMT and the hospital said they did a great job of stabilizing her leg!