Part 2 is going to start from the campground after we tried to go to sleep.

After dinner I TRIED to go to sleep around 7. It’s still daylight, its Friday and the campground has really filled up. There are tents and campers everywhere.

We just finished a long, hard and somewhat stressful 12 miles. The sunrise hike meets at 2:30am. I have 7 hours to sleep. Sherri is not going to go, Lisa hasn’t said she would go for sure and Jose and his girlfriend just cancelled. I’m going in the tent in hopes of Lisa is going to go. I cannot fall asleep. I toss and turn, do social media and watch Netflix. Lisa text and says she is coming and should be there by 10.

At 10:30 I get up to go to the restroom and Lisa’s car is parked in the empty site in front of it. It’s all dark so I guess she is asleep. I think Sherri managed to sleep too!

I don’t know why but this campground is partying down. The camper across the street is all adults and talking and laughing loudly! A campsite somewhere to the right must have a bunch of kids cause they are laughing and screaming and I thinking shooting fireworks. The parents were just as loud! Quiet time is at 10:00pm here. Well it’s 11 now and I take to Facebook to complain! Next some late campers pull in and set up camp right next to us. These people made so much noise. He must of slammed his car doors and tailgate 10 times! I’m tired, grumpy, uncomfortable and have to be up in 3 hrs!

Next the wind starts. It’s blowing pretty good. Now I’m worrying about that tarp blowing over and scratching her car like it did my car at Betsey’s campground. It’s not staked down because the stakes were not with it. I keep stressing so I get out at 1am to take the tarp off. The noise woke sherri up and she helped me take it off.

Back to bed and I think I finally fell asleep. Bam 💥 alarm goes off at 2! I hit the snooze but then got up anyway. At this point I was wishing I didn’t convince lisa to come so I could go back to sleep! I was already dressed. Put my shoes on and walked toward her car. She was standing in the road waiting for me. Thankfully she decided to bring us each an energy drink.  We drove down to the trailhead and met some people going. There was 20 altogether. 7 girls, a leader, a sweeper and 11 guys.

We all put our headlamps on and off we went. Ranger Scott was leading the hike. He was slow and methodical. We followed single file. He walked up every rock patch. Most of the time the rest of us did not follow him but went up the dirt path. He was so quiet. He hardly ever said a word. 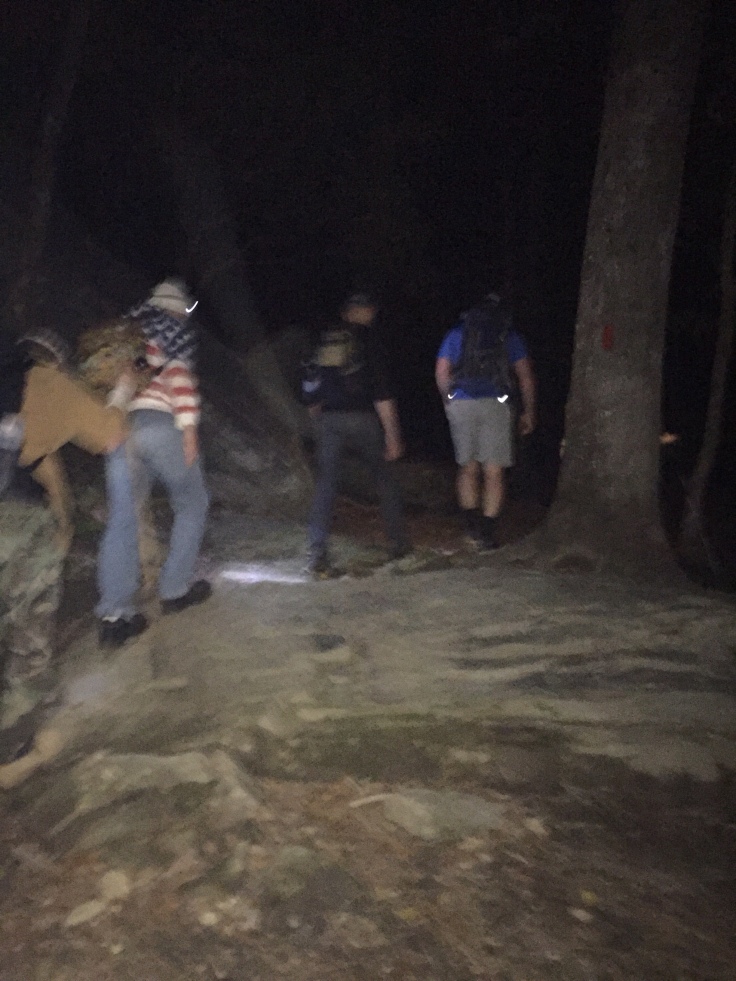 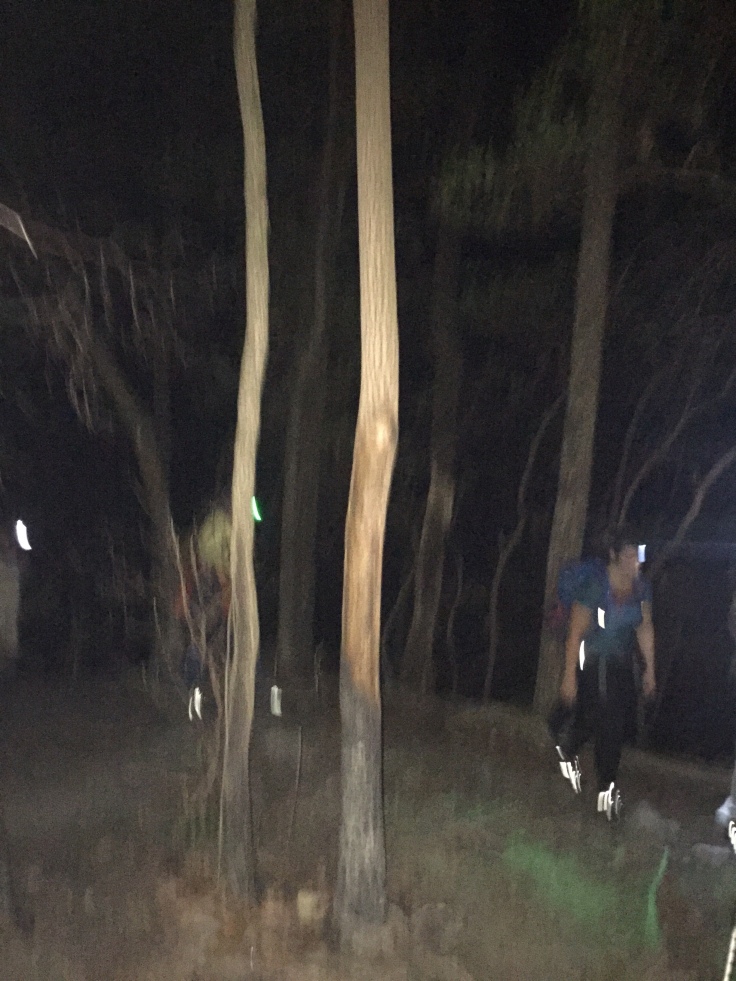 The hike stopped about every half a mile for a rest break. On the first break I told ranger Scott about the wild pigs we encountered yesterday. He was very interested and said he hasn’t been up there this year but there was a lot of discussion on how to get rid of them!

The next stop was at the trailside shelter. There was a fire here two years ago and it was more of a low Burn and the Shelter survived but then a tree fell and took it out. They are working on rebuilding it. Two of the girls were having a lot of trouble going up this trail. They made it to this point but decided to turn back. The sweeper took them back down. They had come all the way from Columbia to do this. Before the hike the sweeper – Pam said she has only had to take people back down once. It is a hard trail. Unfortunately the Facebook post said it was a moderate hike instead of strenuous. I wished I could turn back!

We heard an owl very close by but didn’t see it. This is when I realized one of the hikers was a professional photographer and was carrying a tripod up. There was a girl named Haley who was in a Facebook group called Girls who hike SC. I saw her post about this hike. She was here by herself.

We took off again and hiked up toward the turn to Governor’s Rock. The smell of skunk was super strong. We smelled it for a while. I thought it was probably walking along side it! This was the hardest part of the trail. The ranger said it was also the steepest. We hiked about another mile along the trail. We could know see the lights from the towns and houses around us. As we were walking one of the guys upfront let out a big fart. Without thinking I said “so it wasn’t a skunk after all!” that got big laughs from the guys. Thank god it was so dark though. My filter is either broken or non existent! Lol.

The next stop was just below Governors Rock. This is a big long smooth rock with awesome views. It has some foot holes chiseled out but it is still pretty steep. We stopped on top to take a break and take some cool pics. There was a full moon.

The next part of the trail was the last difficult part! Yay! This trail is very hard anyway and I’m so tired. I wasn’t sure how I was doing it! It was rocky all the way to the top. Once we got there we stopped briefly at the overlook then headed to the backside of Table Rock.

This overlooks the Greeneville Reseviour. We all took a spot on the rock overlook. The sky already had a hint of pink at the top. There isn’t many city lights on this side because it faces Cesar’s Head.

I met another girl up there named Becky. She was a volunteer on the Foothills trail. Her job is to check a certain section of the trail regularly for blowdowns or damage. She is also in that Facebook group. 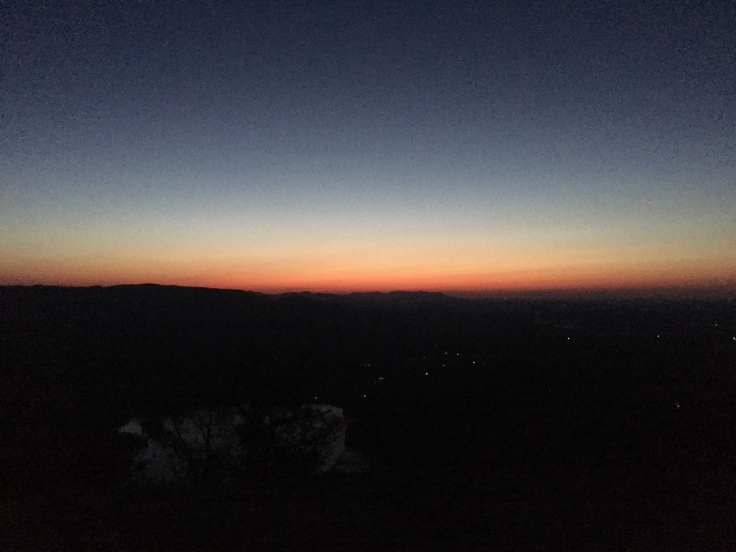 I ate my snacks while we waited for the sun to rise. Slowly it got brighter and brighter. It was really beautiful. Everyone was snapping pics. The photographer said he would send us a link to his photos if we emailed him. Lisa brought her good camera too. 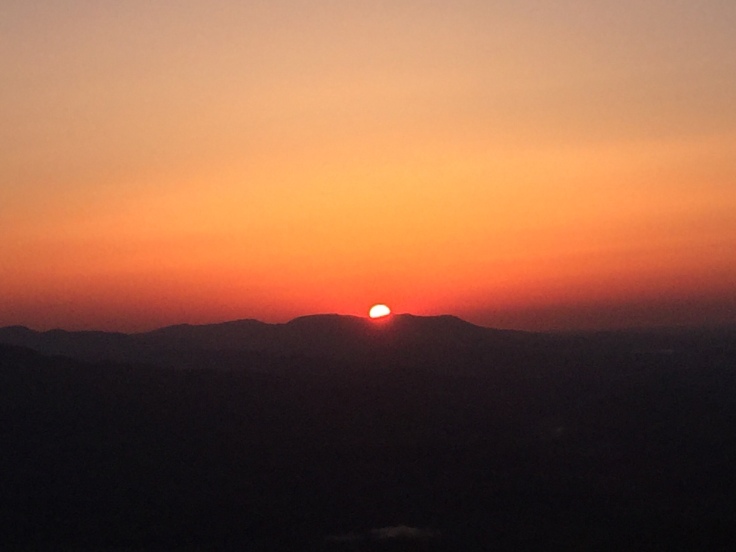 After the sun rose Haley suggested we take a Girls who hike SC group photo. I handed this guy my phone and he took our pic. Then I suggested he use someone else’s phone since mine was old. He got the best pic using Haley’s phone! 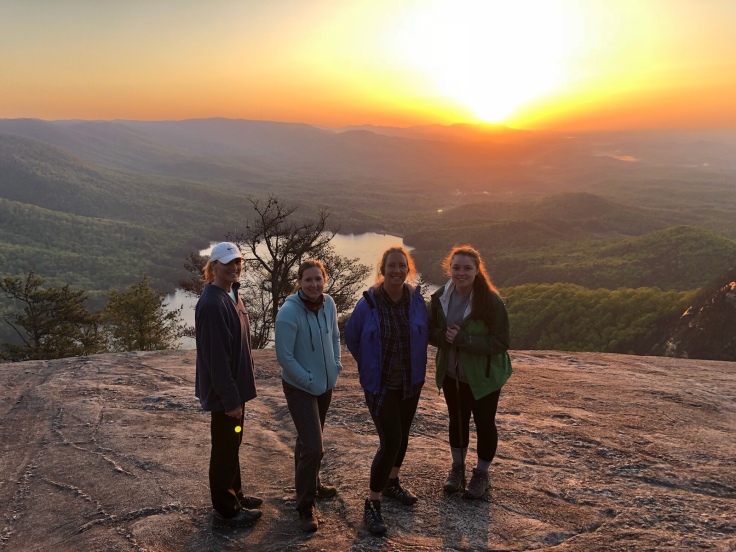 We sat for a few more minutes. 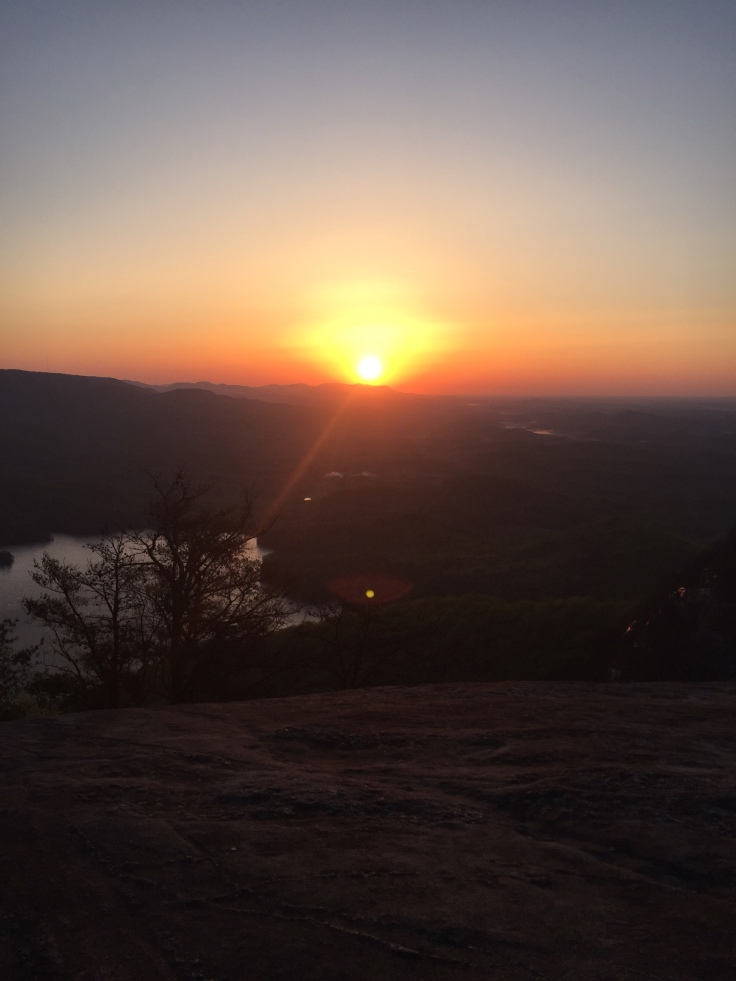 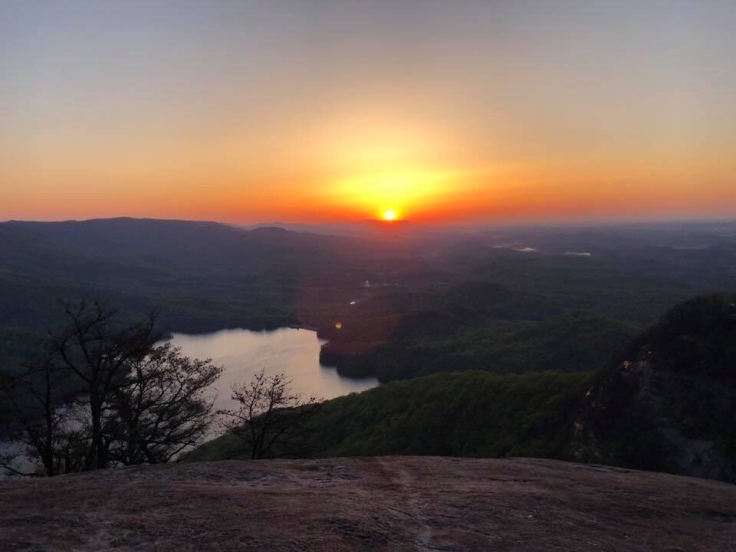 I was ready to go! Haley took off first and we never saw her again. Lisa and I took off and headed down. To me this trail is just as hard going down. The hardest part for me is the rocks that are 2 feet or so high. Big steps are Hard!

I was ready to go! Becky was right behind us but kept stopping to take pics. I guess I’m a slow hiker. She kept catching up to us. About halfway down we started running into hikers going up. We made it down by 9:30. When we got back to the campsite Sherri had it all packed up and was ready to go! Yay! I don’t know how I made it through this hike, I was so exhausted!

I through my stuff in her car and we left. We were both hungry and the second store we passed we stopped to see if they had a grill. They did! We both ordered a bacon egg and cheese biscuit. It was awesome! Lots of cheese, a great big homemade biscuit! Yes Lisa I know Biscuits are bad!🤣🤣🤣 but oh so yummy! I deserved this biscuit! I even had a big Mellow Yellow!

Sherri told me to go ahead and sleep and I told her I never sleep in a car. Never! I dozed on and off all the way home! I barely spoke to her all the way. Every time I fell asleep I’d have a weird dream and startle myself awake!

As soon as I got home I went to my bed and slept for a couple hours! Sleeping in the ground, hiking 20 miles, wild pigs! I was exhausted!

It was a really great weekend! I just love my hiking buddies!