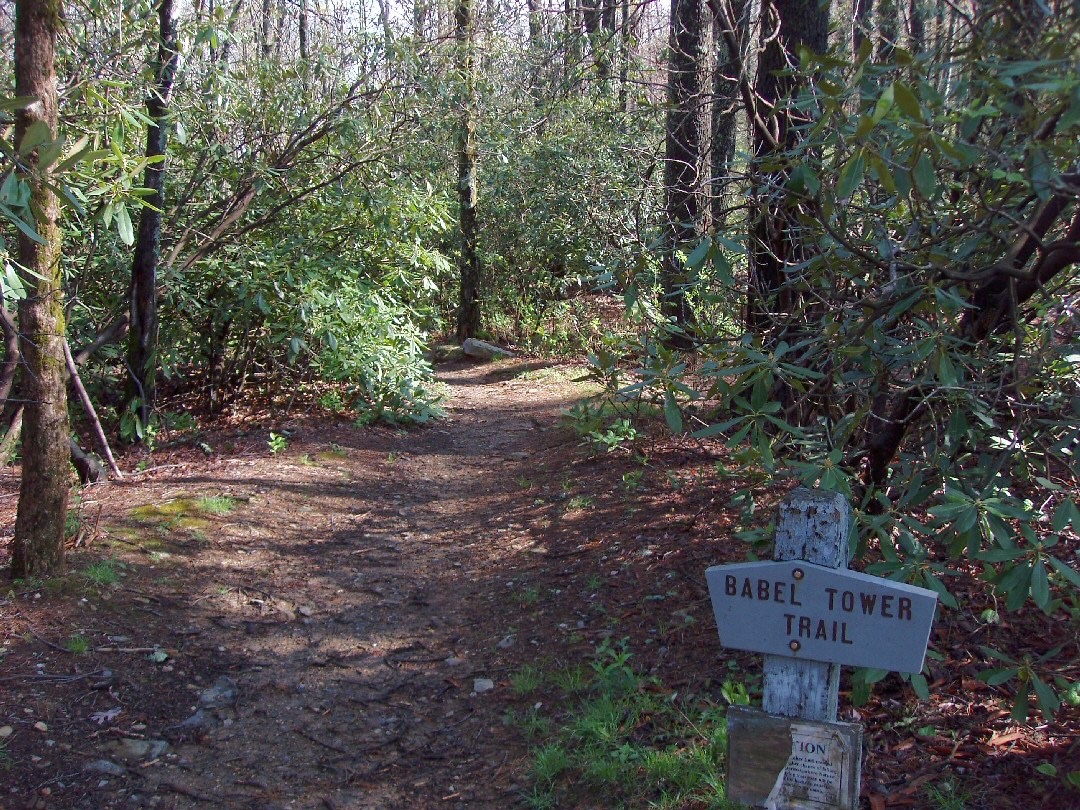 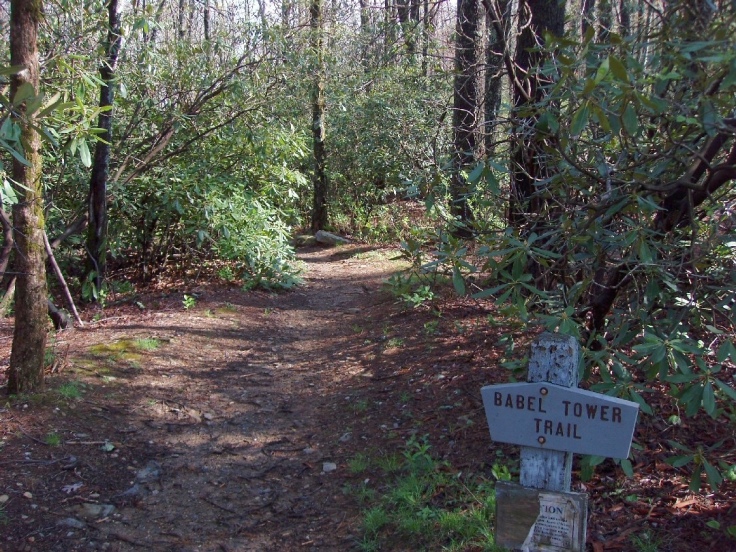 Friday we decided to take off early and head up to Jonas Ridge, NC.  We found a B&B on Air B&B.  It is called Alluring B&B.  It was a horrible rainy and windy day.  We made it to the B&B at 4pm check in time.  It was a log cabin with a beautiful view.  It over looked every mountain range at the top of a long road.  We had 2 rooms and a bathroom. 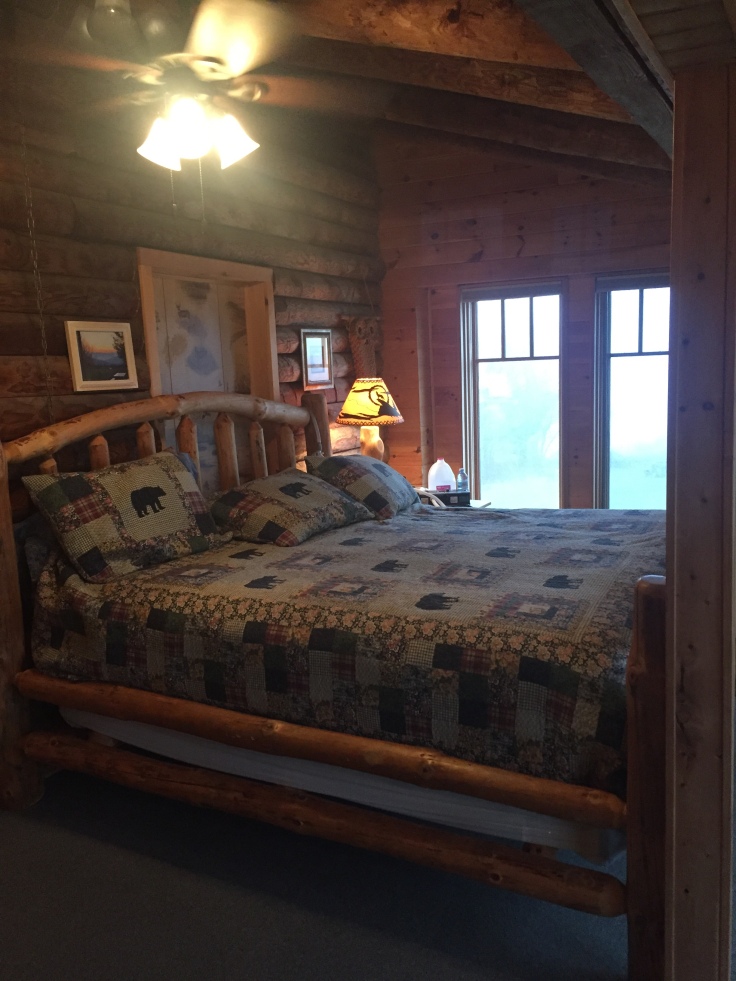 After we settled we decided to ride to Linville to get something to eat and see some music.  We ate at a BBQ place I did not like and the music was tomorrow!  So we drove back to the B&B.  It was foggy, windy and rainy.  In the house you can feel and hear the rain and wind whipping around the house.  The owner said there were 60 mile an hour winds.

Being a B&B we had breakfast the next day.  Al has been a chef his whole life and wow was breakfast awesome!  He made a banana pancake that was so awesome.  The bananas were melted into it.  We also had some potatoes with cheese that were unbelievable, scrambled eggs, biscuits, bacon and Speck – a pork meat like prosciutto.  We sat around till 11 talking to the owners and the wind had died down.  Time to go!

We had decided since it was so windy we would just go to Linville Falls and Wiseman’s view.  Half way there Mike decided he was ready to do Babel Tower Trail.  I haven’t done this one and was excited!  We headed for the trailhead which was 1/2 between the falls and Wiseman’s view.  This trail is 1.2 miles each direction but doesn’t have any switchbacks so it is mostly down going and up coming back! 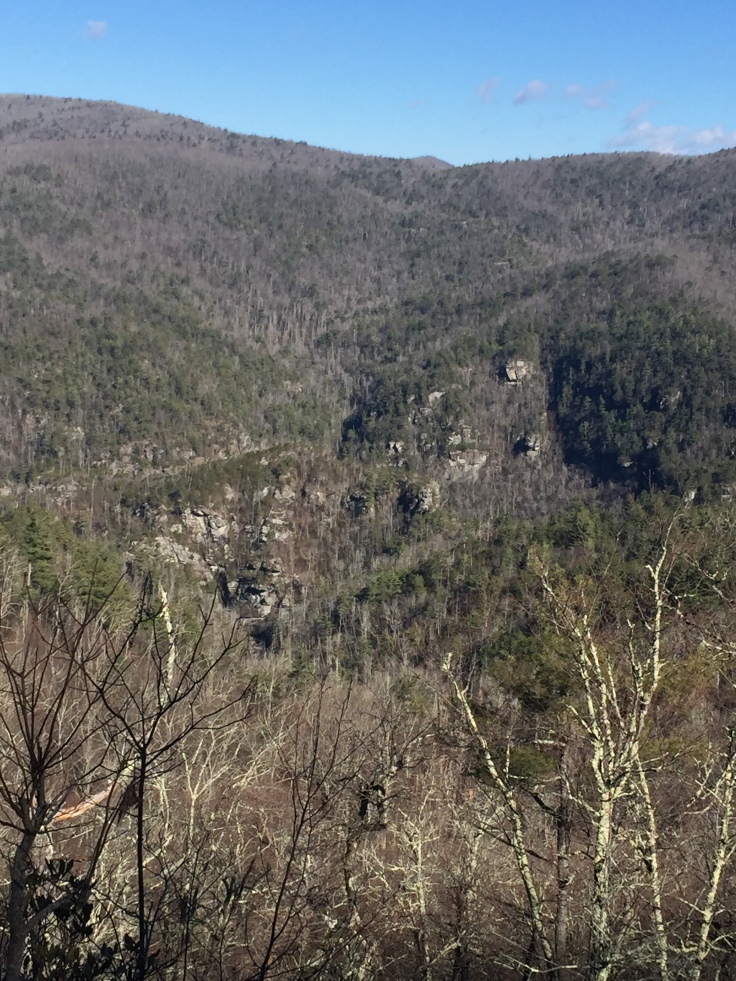 This trail is across from Sitting Bear and Hawksbill.  The views across are awesome.  The trail is very rocky and full of roots as well as wet. 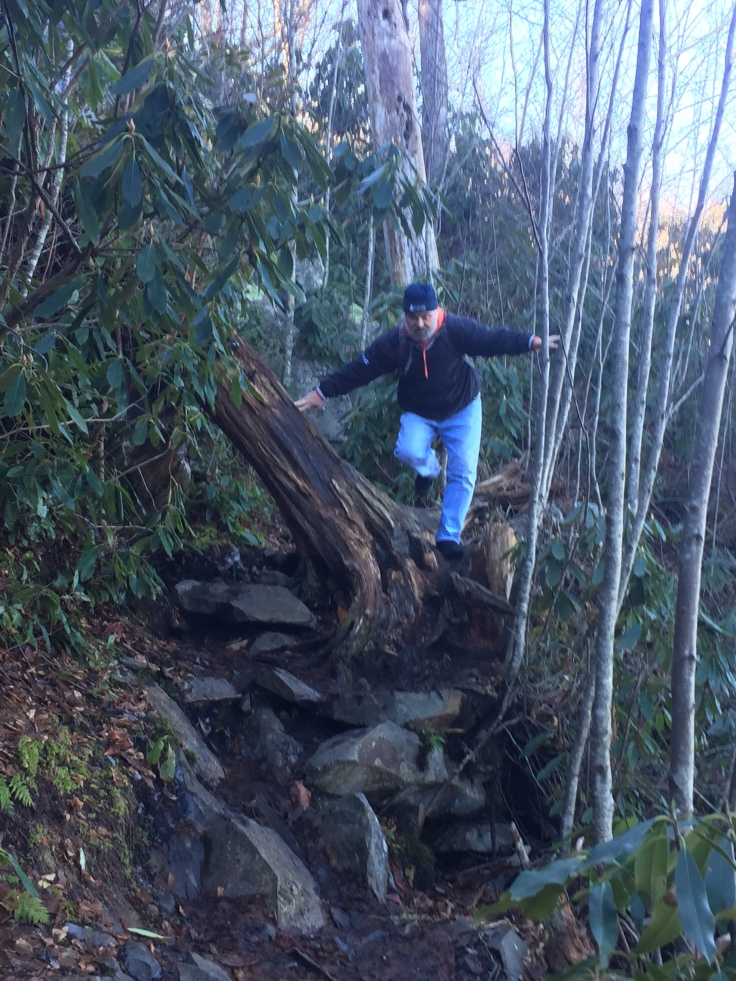 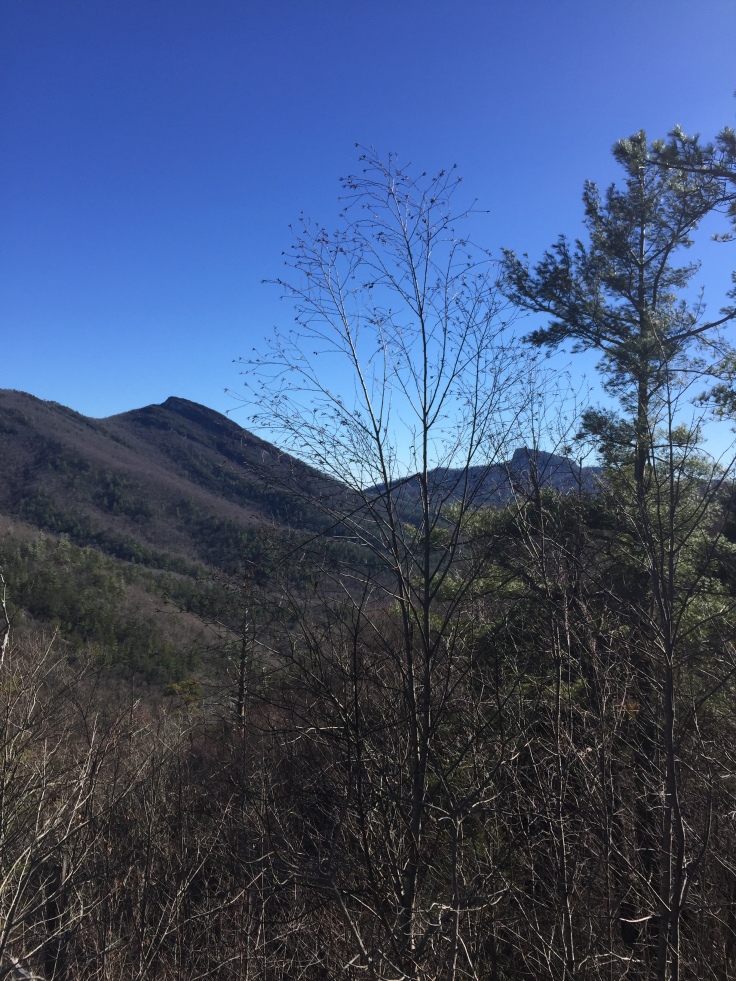 Mike is not used to hiking but it was all down hill and he did really well going down.  He stopped a lot to take pictures.  But that’s what we do anyway!

There were a few rock outcroppings on the way down that we climbed on taking in the views. 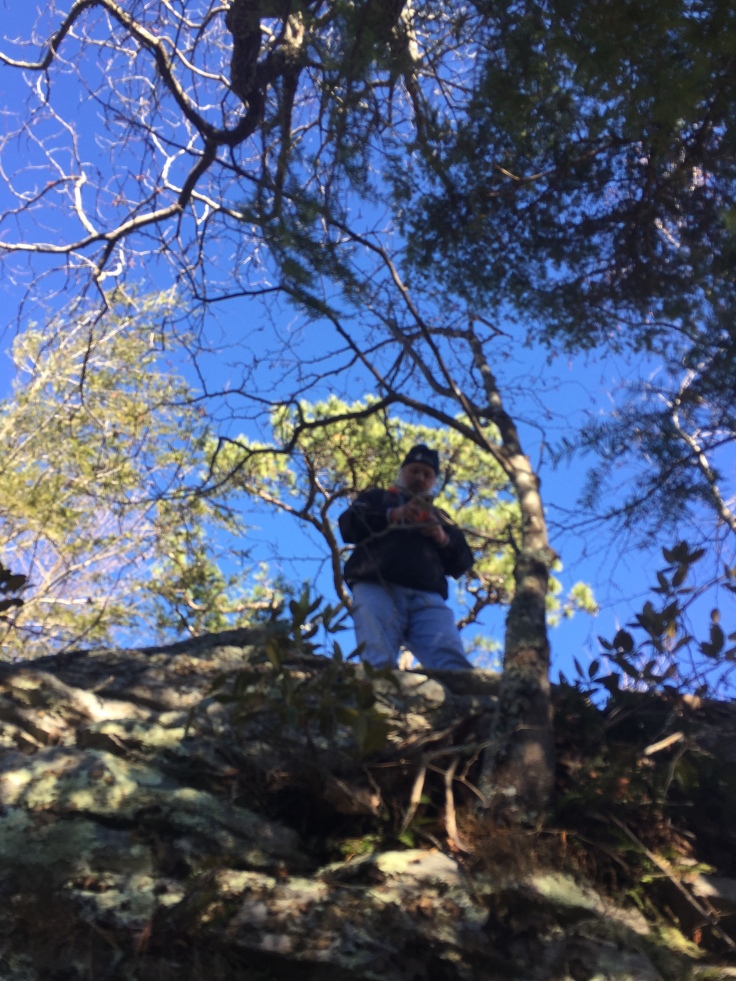 Toward the end of the trail was a rock outcropping we got on.  It was high above the river.  Mike said the water was going the wrong way.  It was flowing up.  As we climbed a bit higher were at a cool place that we could see the river was at a horseshoe.  We were right there where it turns. 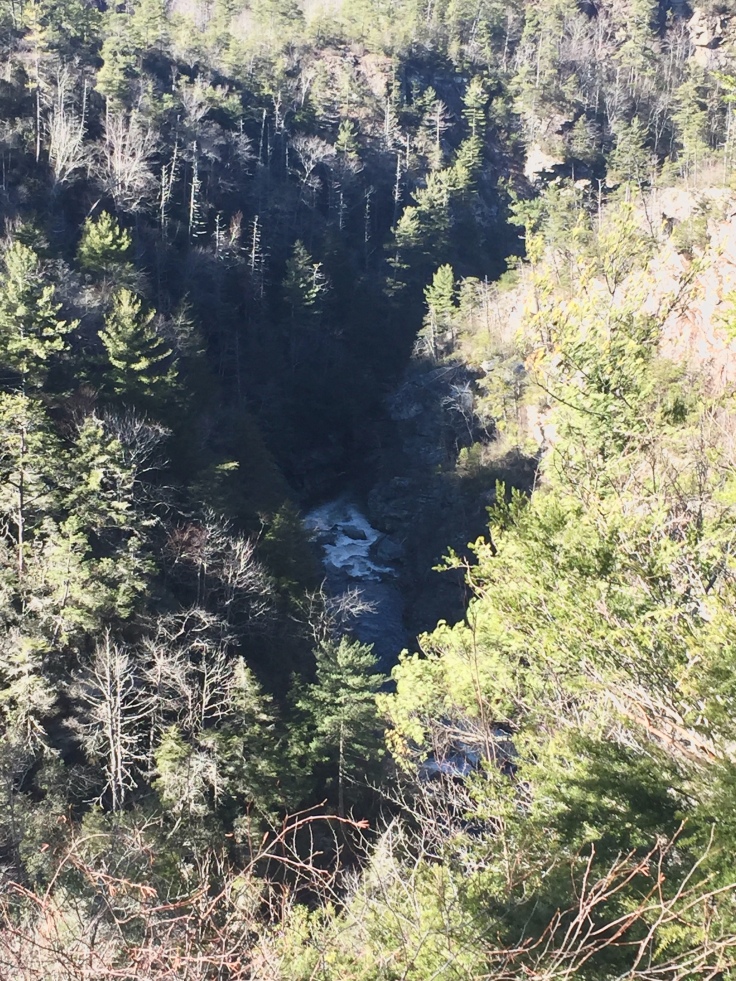 We continued a bit more and reached the bottom of the towers.  There is a trail that goes down to the river here but we were heading to the towers.  We met some kids on the trail and they said make sure you keep left instead of climbing over the rocks.  We were very high above the river.  Mike doesn’t like heights and some of it was a little scary for him but he went through it anyway. 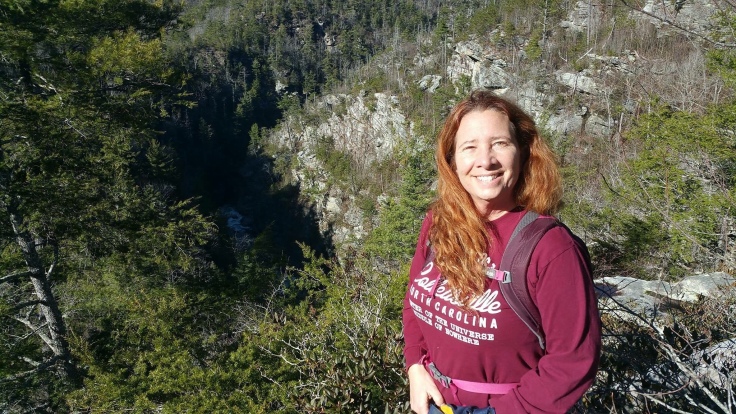 When you go left it goes around the base of the towers to where you have to climb up the rocks to get to the top.  It was a pretty good climb. 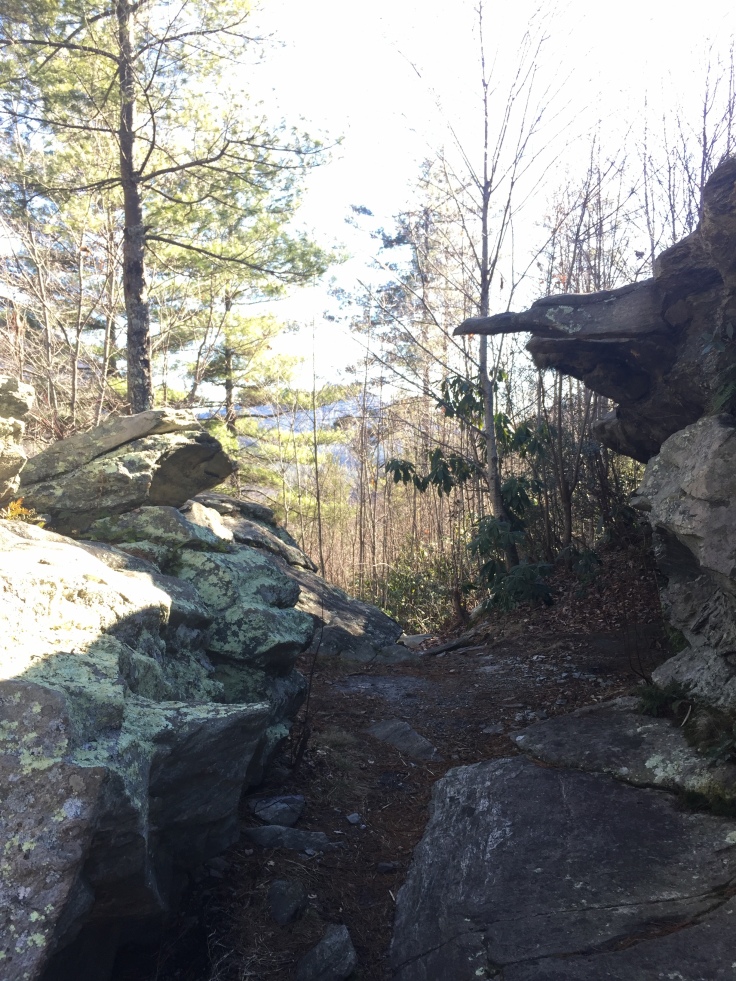 At the top it was awesome!  It about 30 feet wide and flat so you can see in all directions.  You can climb to the next tower or go back toward a little higher ground.  Up here there is a rock with a whole in it.  You can see all the way to the bottom of the river through the whole. From a distance it looks like this.

We sat up there and had some lunch and enjoyed the views.  It was awesome.  We were the only ones up there. 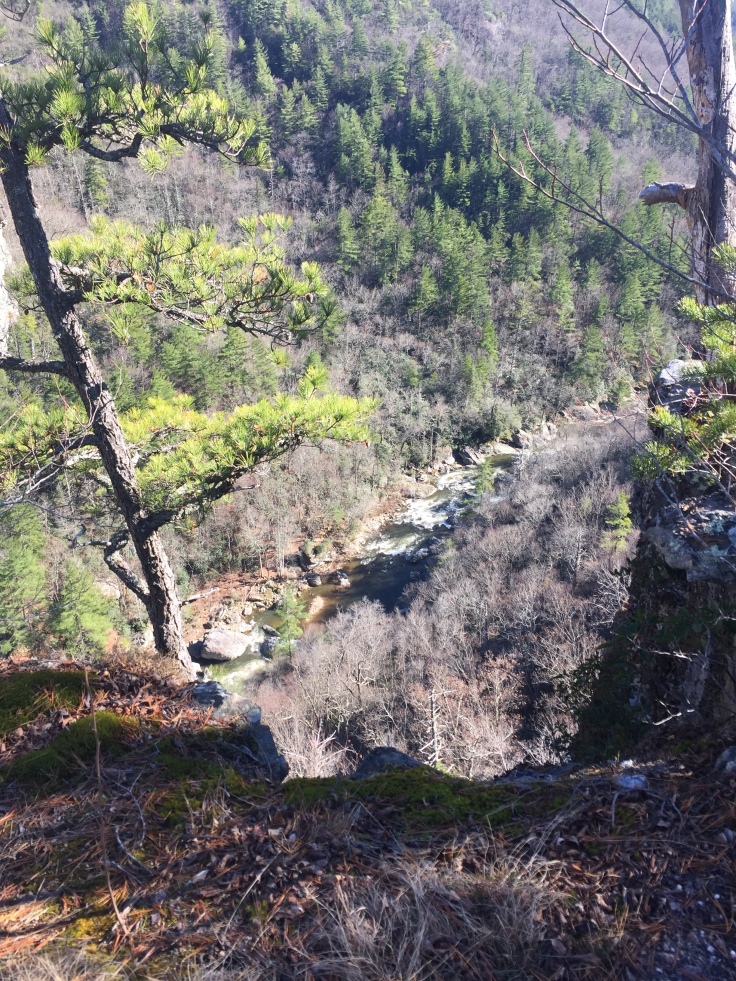 Since we got such a late start we did have to get going because we wanted to make a fire and watch the sunset from the B&B.  Just as we were leaving 3 guys came up and were going to camp up here for the night!  It was so windy last night i was a little world about that.

We headed back down.  Mike climbed down like he didn’t care about heights.  The trail was going to be all uphill so we did need to get going before it got dark.  He took a few breaks going up.  We were walking along and my daughter called.  I was talking to her on the phone about here score on the GRE and I didn’t realize Mike had stopped.  I stopped after a bit and finished our conversation.  then I sat down to wait.  He still wasn’t coming.  Some people passed by and I asked if they saw him.  They said he wasn’t far back.  I asked if he was sitting down.  The man said he was looking for his vape.  I said really?  He said he told Mike that it was Gods way of telling him he didn’t need a vape!  HAHAHA   I thought oh dear!  He won’t go anywhere with out that and I wondered where he left it so I walked back down there.

Turns our he fell off the trail!  He slid 10 feet off the trail and got pinned under a fallen tree!  Only Mike!  He said he called but I didn’t hear him.  He had to pull him self out using a big rock in front of him.  I wish I was able to take pictures of this!  He actually took a couple selfies.  He was so dirty.  It looked like nice soft brown dirt!  But somewhere he lost his vape and couldn’t find it. 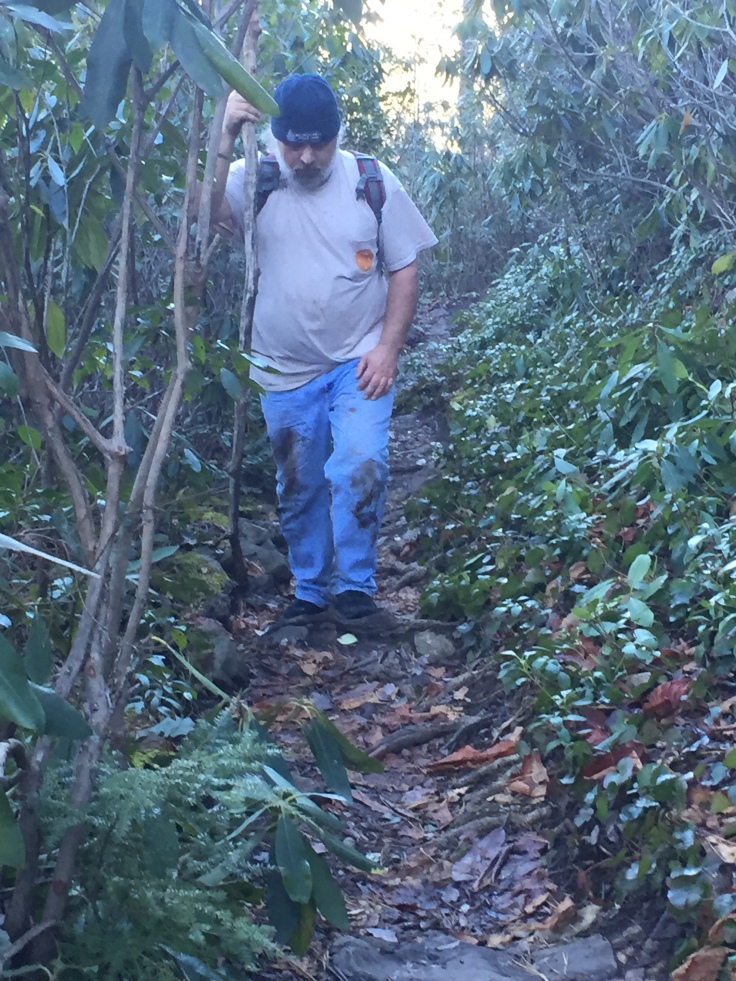 Well he actually did leave without it because he wasn’t climbing back down there and I sure wasn’t gonna do it.

In the Gorge the Elm trees are being killed by a tiny bug. They stand tall long after they have died and eventually rot and fall. They are beautifully majestic against the Carolina blue sky. 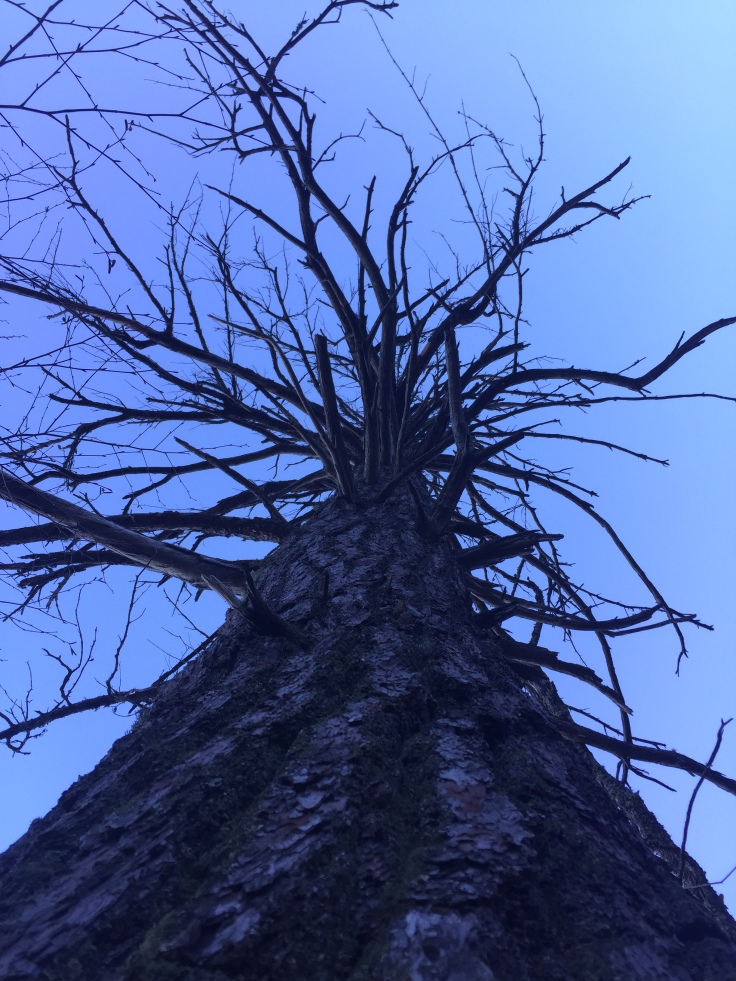 We kept climbing and finally reached the top.  We headed into Linville to get something to eat.  I was taking some spaghetti back from the Italian Place.  We also stopped at Mountain Crossings, this awesome store that has a grill and sells beer and stuff.  They had a bison burger on the menu!  if Iwould have known that I wouldn’t have went to the Italian place!  We got back to the cabin and could see the sun going down.  As we pulled into the B&B it was setting.  He started to build a fire and I went to get a blanket and some food.   By the time I got out there I saw the last 3 seconds of the sun.  It was gone.  The sun was gone but the colors were awesome until it got completely dark.

After the sun completely set the stars were amazing! Since there were no city lights for miles we could see every star. We could even see dim stars we could not see behind them.

The next morning we got another awesome breakfast.