After working Friday we jump in the car with a suitcase and camping stuff. No plan. We headed to the mountains and created a plan on the way. I wanted to go to Crabtree Falls off the Blue Ridge Parkway. The plan kept changing because of time but we ended up on the Blue Ridge Parkway. This falls was at a campground that was closed for the winter. There was one other car there. It was after 3 pm. We headed through the campground following waterfall signs. It looks like a nice campground with about 100 sites. It’s about 36 degrees. The trail down to the falls is a series of downs and switchbacks. I went ahead of Mike because it’s my mission to get the 100 waterfall challenge done. He could go at his own pace or not at all of it was steeper than he was comfortable.

There were missing dog signs posted everywhere. They looked very new so we assumed it was in the last day or two. The dogs name was Charlie. We yelled for Charlie intermittently on the trail. I made it to the falls and it was a beauty. Easy to climb right up to. 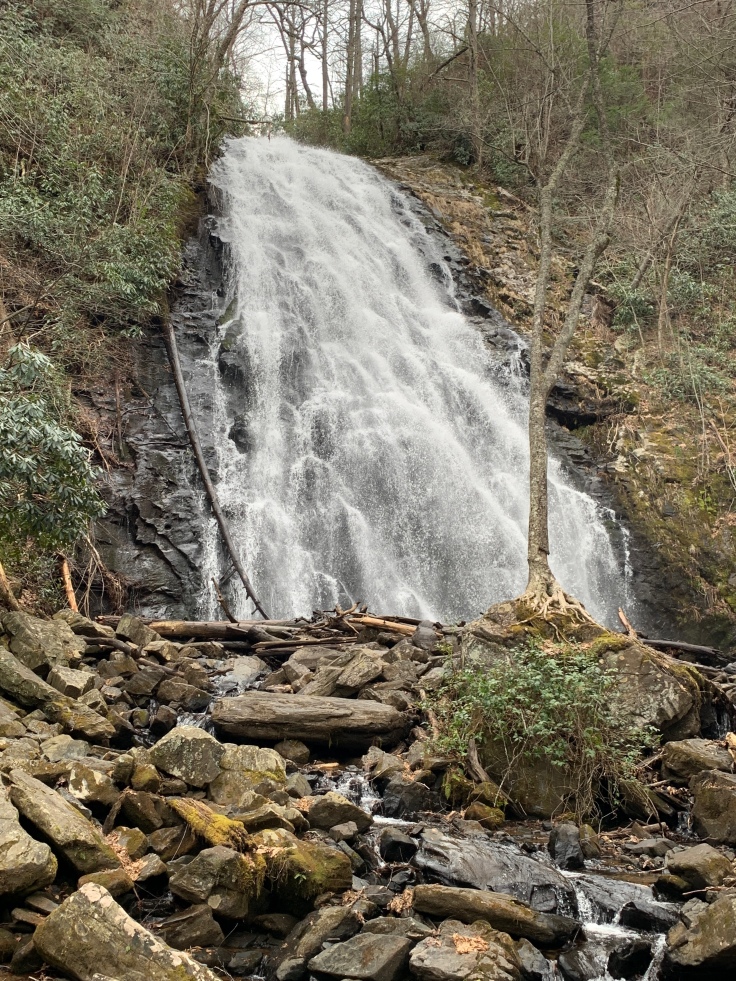 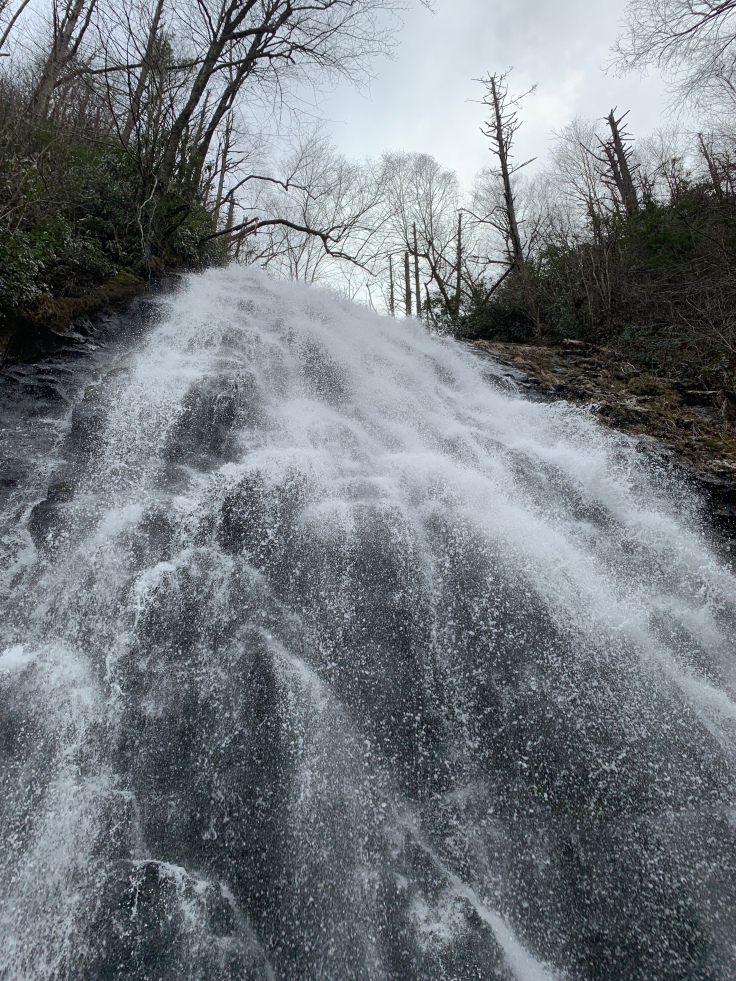 I started back up the trail and here comes Mike. So we went back down to the falls. The trail continues up the other side but looked steeper. After a bit we headed back up the trail. When we got back to the campground I noticed an animal cage with some peanut butter, fresh fish and a dog bowl of water. I knew this was for the missing dog Charlie. I was bawling at this time. This place is remote and deserted and cold. I felt so bad for this dog. I continued to call and look for him. Just as we got to the parking lot I saw some people coming from the left on the Blue Ridge Parkway and one lady was carrying a dog! I took off that way and asked if it was the missing dog and it was! She had been missing for 2 days. The lady was bawling! I was crying! Mike was teary! I’m so glad we were able to witness that because I would have worried about that dog all weekend! That was awesome!!

We headed back down toward Linville. We are going to stay at the Pineola Inn after we eat some Italian at the restaurant next door.

It’s a nice clean, comfortable, well kept motel. The office has a great big store and museum in it. They had a little of everything. The museum had arrowheads, tools, jewelry found around NC and Tennessee.

The next morning we headed to Valle Crusis to do another waterfall called Crab Orchard Falls. Valle Crusis is on the other side of Boone. It has great views of Grandfather Mountain, farm land and more mountains. This waterfall is on private property belonging to the Valle Crusis conference center. It is a nice wide trail that goes up steeply for about a half mile then goes down to the base of the falls. It’s a multi tiered falls. It’s very pretty.

We headed back to the car. I noticed this bell in the parking lot. I couldn’t help but pull the rope. It was super loud!

We got back into the car and headed back to Linville to go to Upper Creek falls. We haven’t seen any fast food because these areas don’t allow them. We stopped at a gas station to get some snacks. There were great views of Grandfather Mountain. 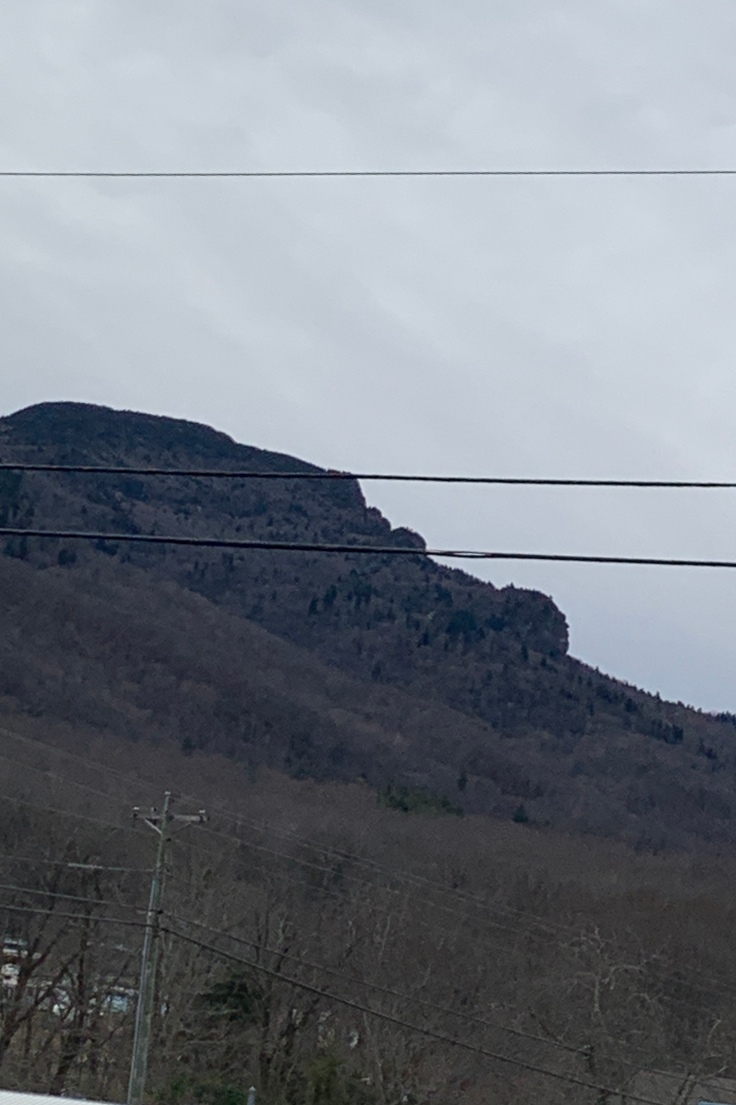 We got to the trailhead of Upper Creek falls back off 181 in Jonas Ridge. It says go right base of the falls, go left to upper falls. I figure go right the view is always better from the bottom right? We start heading down this trail and it’s very steep. It has long switchbacks. Mike decided he was going back and going to the Upper Falls. I continue down and there are a bunch of cheater trails that avoid the switchbacks and go straight down. I used these instead and it was probably only 1/4 of a mile down. I passed 3 guys st the bottom that said there was no way to cross so they were heading up. I’ve been hiking with Lisa to long to believe that! I looked around, then scrambled down a bit. I found a place to jump from rock to rock only problem was the rocks were slippery. I grabbed a pile of leaves and put them on the slippery rock and jumped across! Easy Peazy! 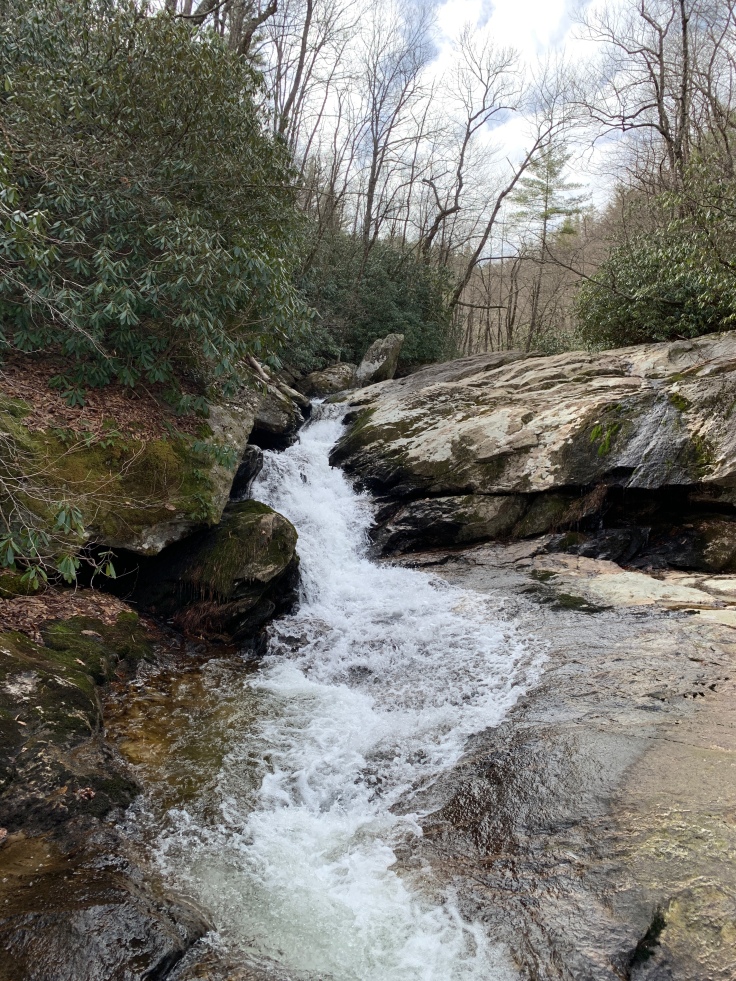 This was the view from the bottom?! The trail picks up at the other side and heads up river. It reaches the real falls. It’s a beauty! I could tell we were on the edge of Wilson’s creek because this one resembled the smooth rocks that are there. 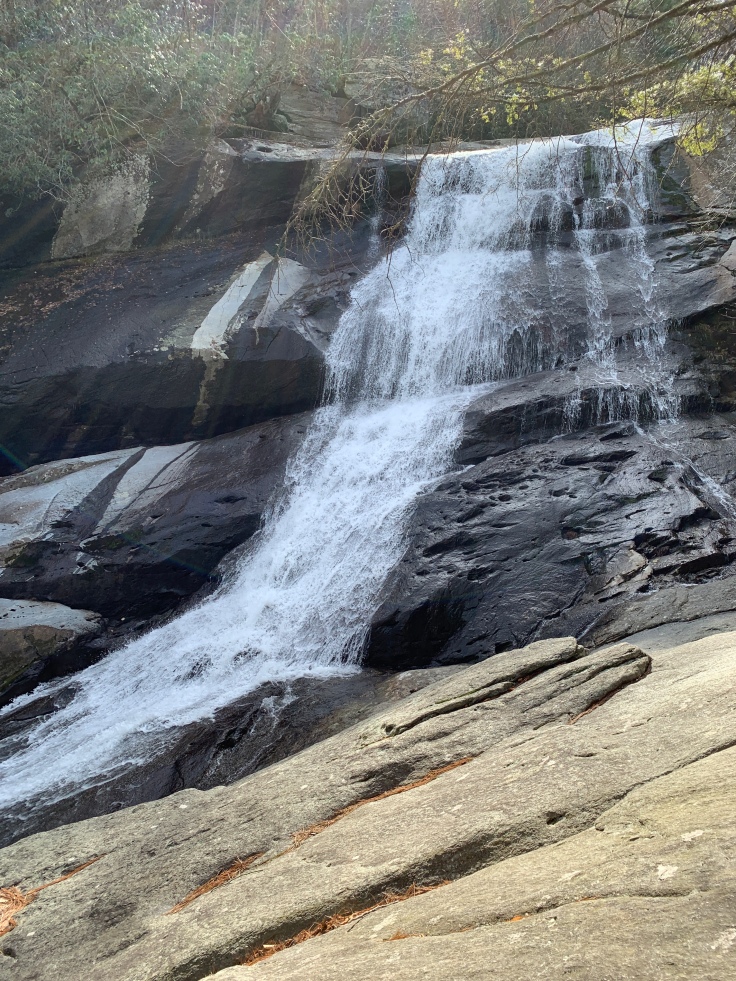 From here the trail goes up the falls and then another rock hop to the trail. 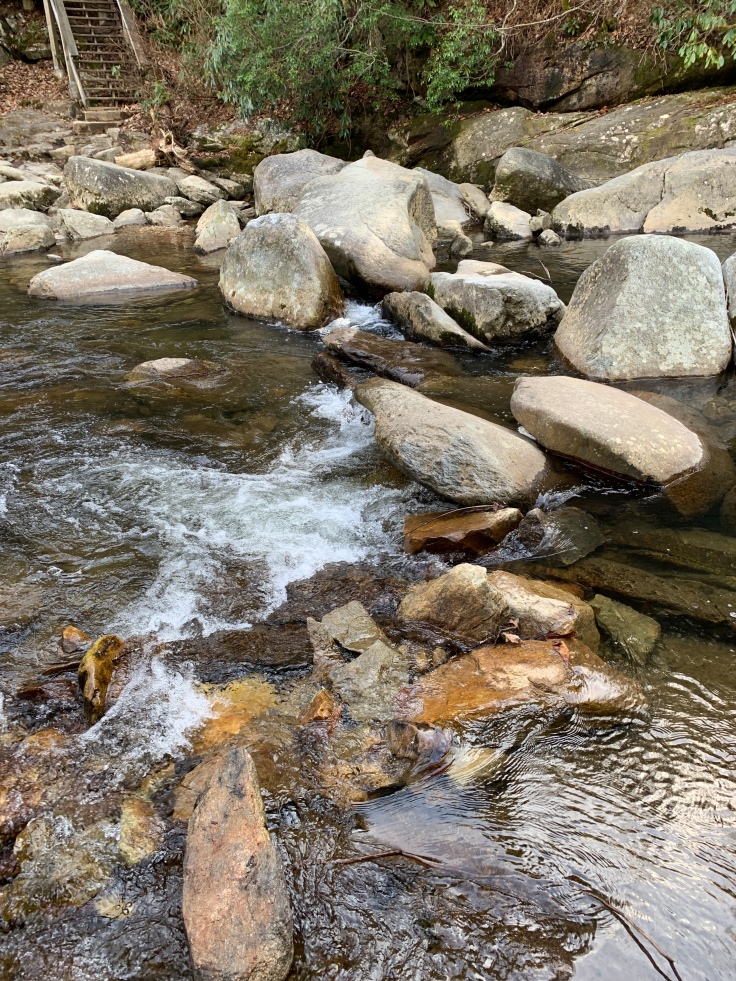 On this side is a long smooth rock that you can stand on and look over the falls.

Really pretty! Then up the stairs and a steep trail back to the parking lot.

That was a fun loop. I think it was close to 2 miles. When I got back to the car Mike was there. He walked to the top of the falls. Those guys that couldn’t cross were just reaching the parking lot too. They said coming up was tough it was pretty steep.

There is absolutely no signal here. I want to do Steele’s Creek falls but can’t find it. We get closer to Morganton before we get signal and find out the road it’s on is closed so we would have to walk it. We decide against it and head to North Harper creek falls instead.

We came in Pineola Road parked at the trailhead. It’s getting late so I rushed off down the trail to get to the Falls and back so we had time to get back to Charlotte. It’s a nice trail, easy to follow. It’s almost 2 miles. First is the lower cascades. I don’t know if they have names? 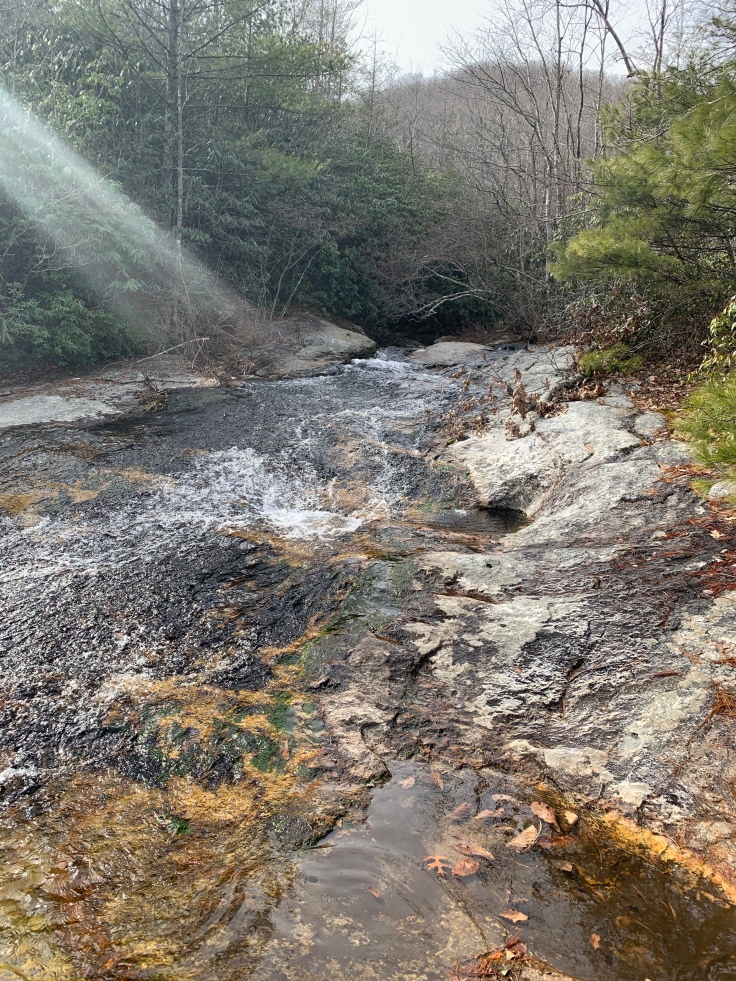 Then over a creek where I see a lone guy camping. This creeps me out because I’m not used to hiking alone. I follow the blue up to the falls. It’s not much further. 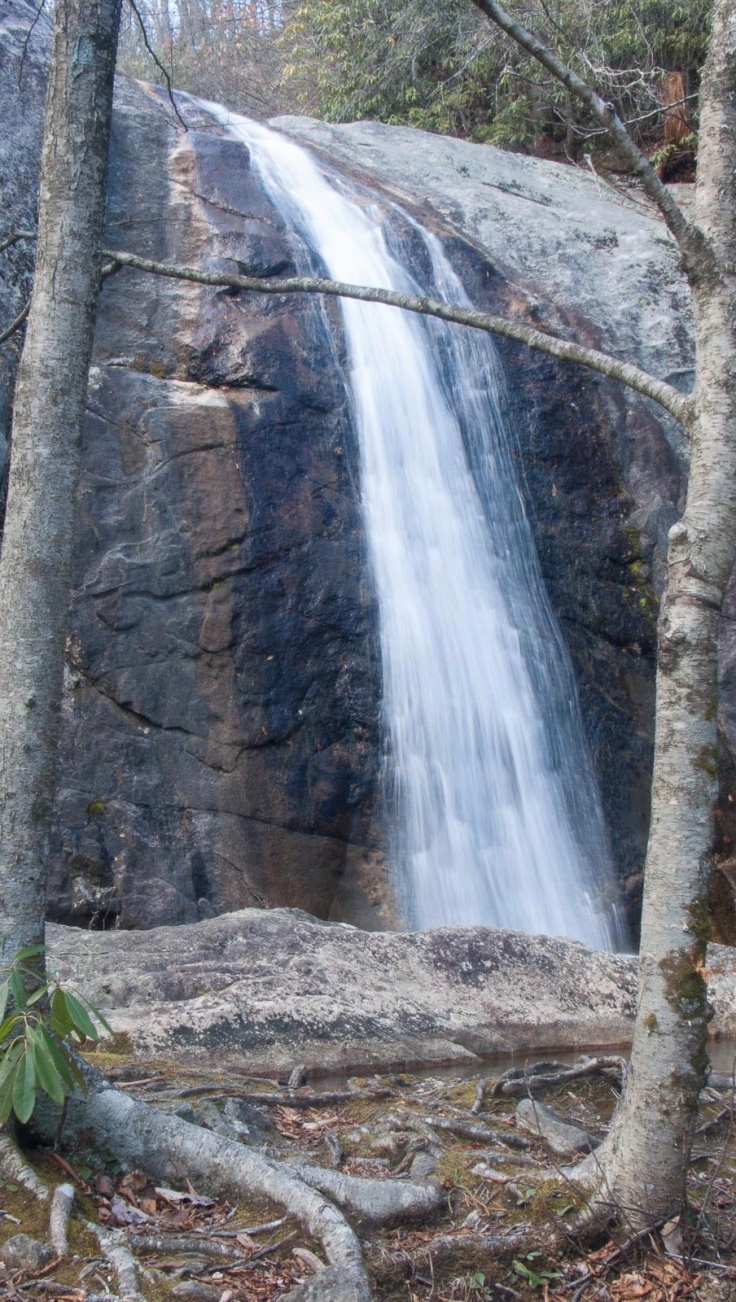 Then I practically run back up the trail and meet Mike at the car. We take off towards Betsy’s ole Country store in Mortimer for some hotdogs. Bruce, the owner is there. We chat for a while eat our hotdogs and head to Charlotte. We have tickets to Folk Soul Revival at the Evening Muse. We are tired so we go to Smelly Cat Coffee Shop to get some serious Caffeine!

I went to the BBQ place and had Greg Brady sliders and tater tots. It was a beef patty with Mac n cheese on it and it was great! Off to the Muse. The band was great!

It was over at 9:30 and we headed to Fort Mill to see the Damn Band. I was to tired to go but we went. Lots of friends show up so it’s always fun. We left early at 11 and went home.

One thought on “Weekend – Waterfalls and Music”