Sherri, Mary, Brandi and I

Well it’s another rain filled night in the GSMNP. Glad we bought that shade tent! We have breakfast out of the rain. It rained some last night but not to bad. We got ready and headed to NewFound Gap where we were going to hike to Charlie’s Bunion. We got to the parking area and it was cold, foggy and rainy. It was bound to clear up but rather than taking our chances we headed out to Ramsey’s cascade. If it poured on us here we would still be safe because no cliffs.

To get there we drove right through Gatlinburg and kept going. Ramsey’s cascade is a 8 mile out and back trail 2200 ft elevation gain to an 80 ft waterfall.

It was pretty far to the trailhead. We parked and there were some other cars. I think most were fishing cause we didn’t see many coming back down the trail. 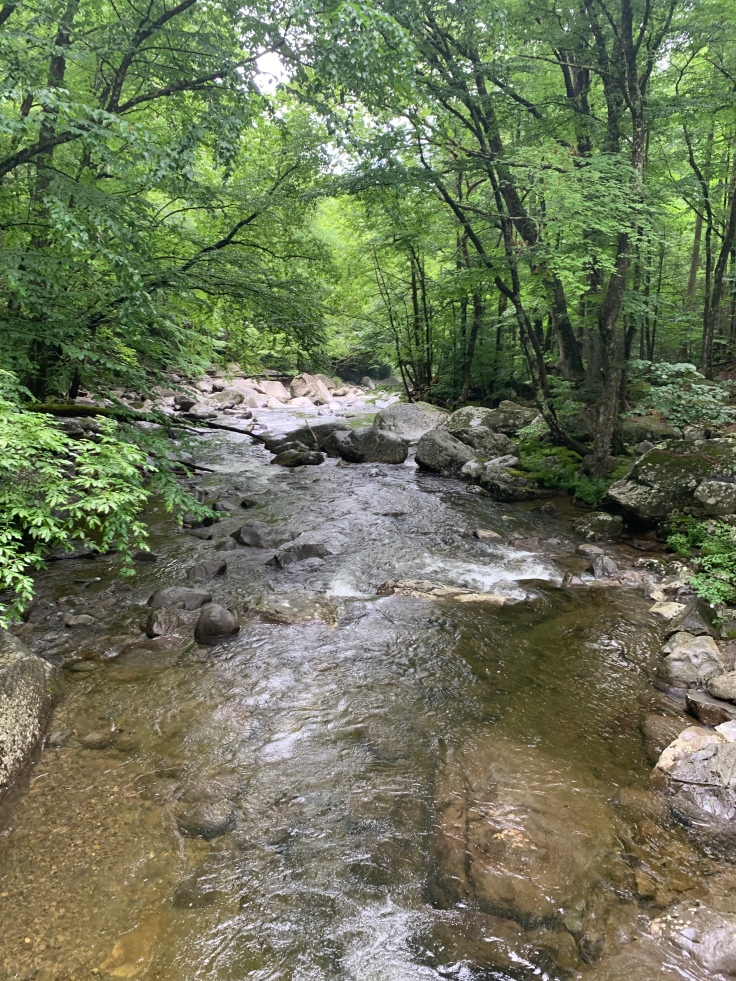 First we cross a bridge then make a right and follow an old logging road about a mile and a half going up.

It was a straight shot up to a round about area at the river. We sat here and had a snack. The sign said Ramsey’s Cascade 2.5 miles.

The trail crosses the river a number of times with nice footbridges. Today is damp and everything is so green. 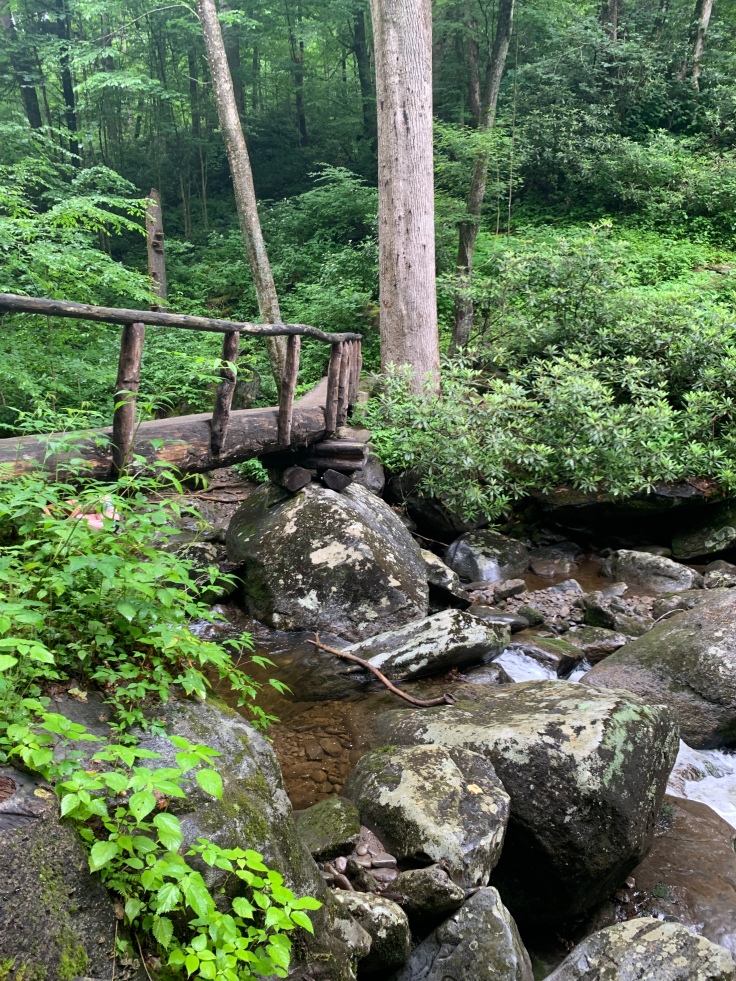 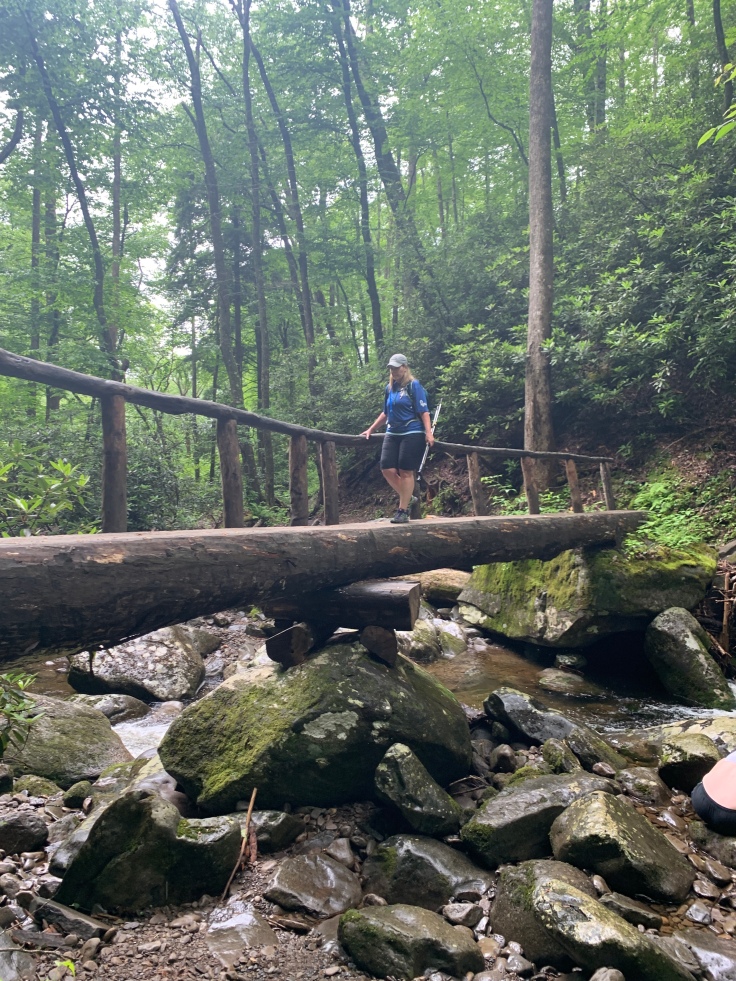 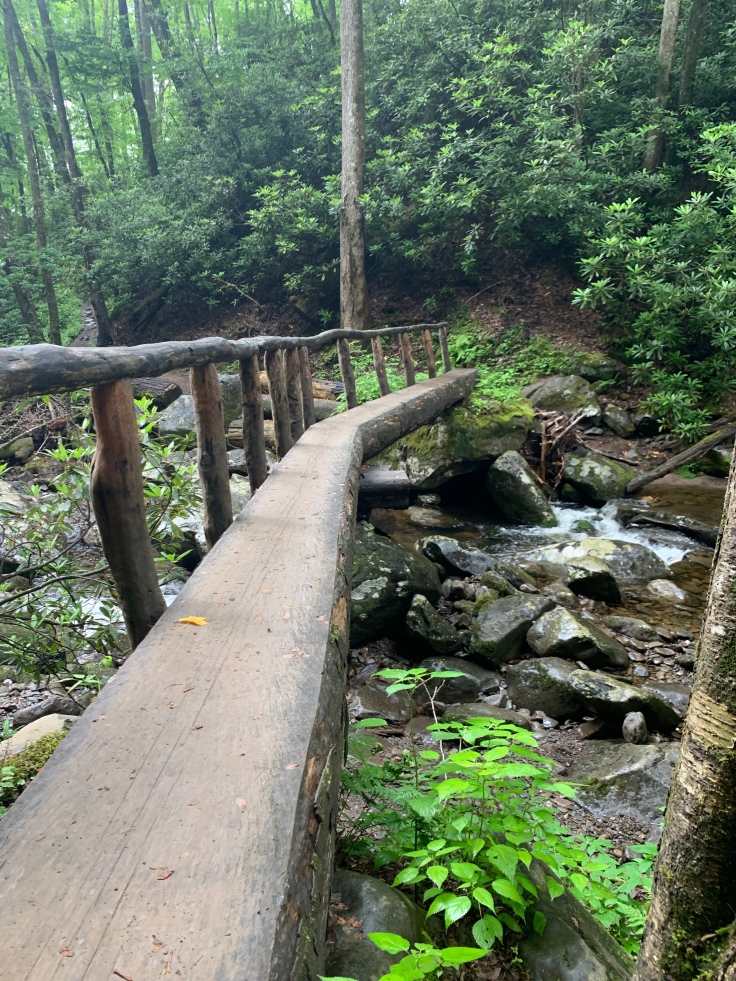 The trail goes to the left and follows the river. The trail goes through part of the largest old growth Forrest in the Smokies. We had fun with these large trees. 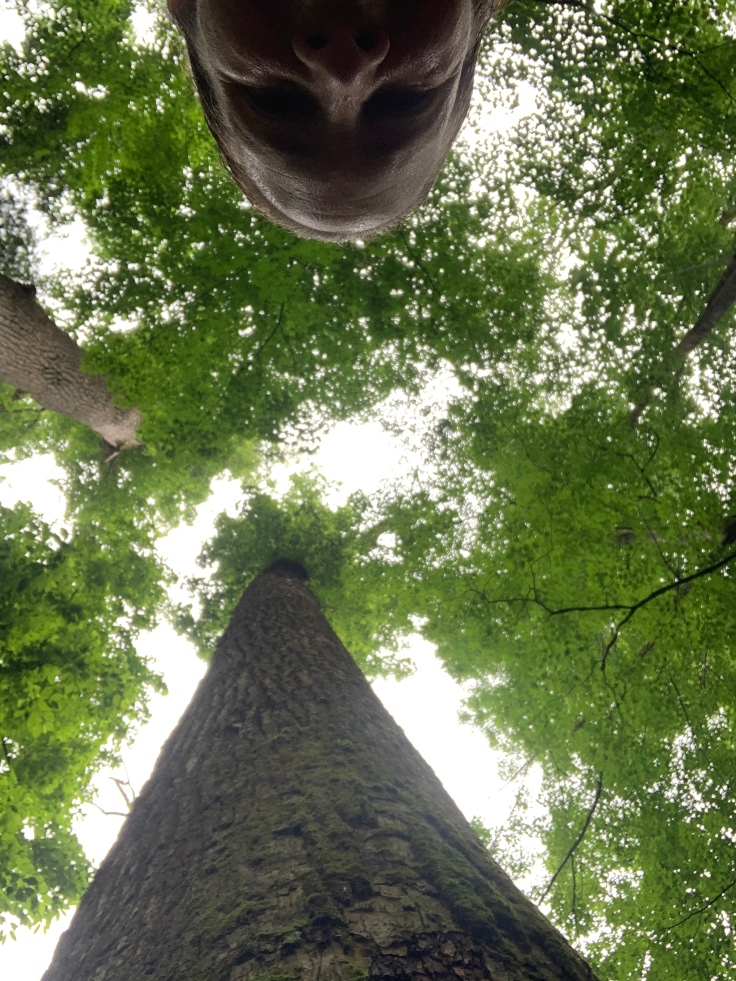 Seriously who doesn’t love 400 year old trees! If only they could speak. I’m trying to catch its vibe, although Sherri says it looks more like I’m playing hide and seek. 🤔 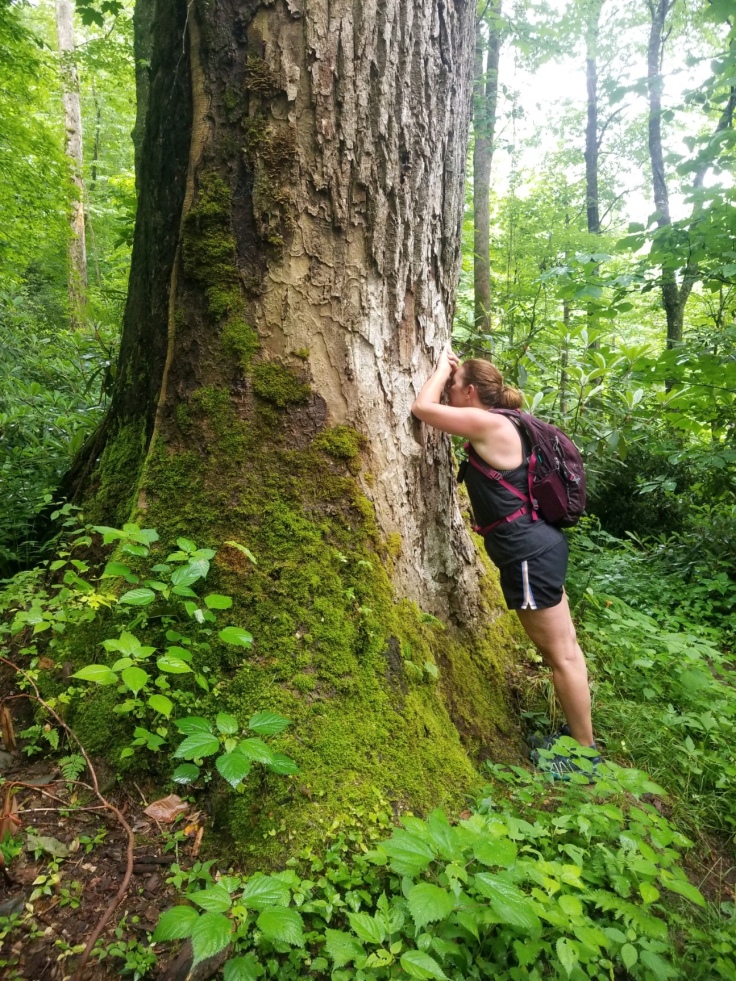 At about 2 miles there is a narrow footbridge about 20 feet high. Really pretty cool. 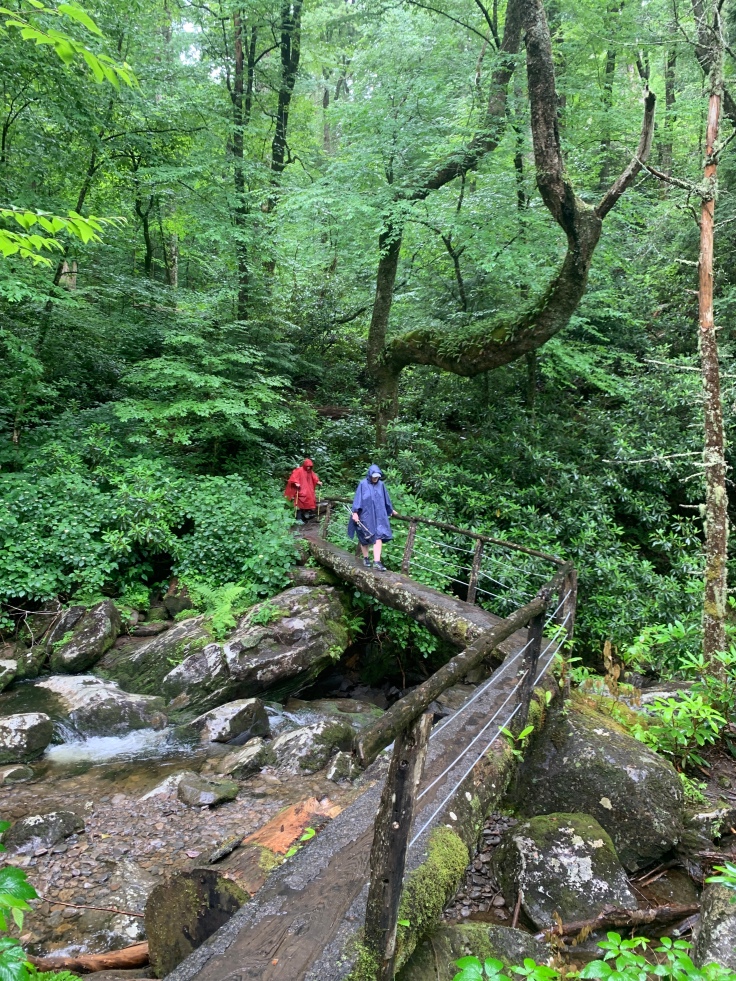 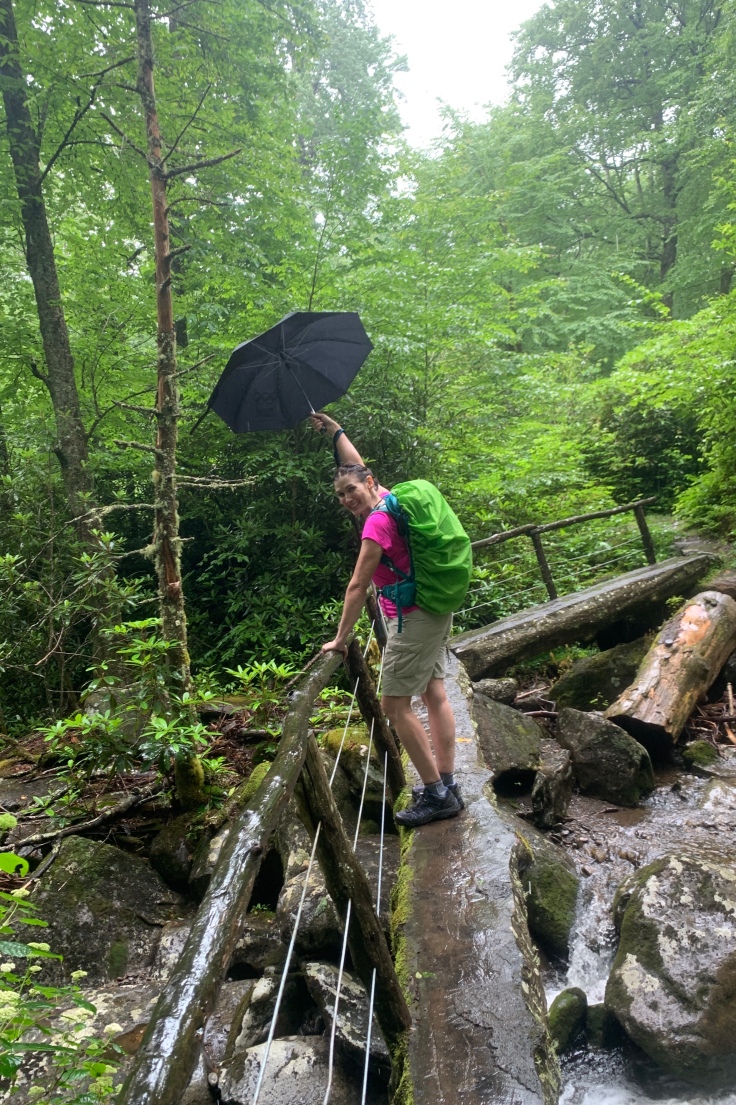 It started raining near here. Brandi took out an umbrella. A ways up the trail we ran into some people coming back and a man says ” I’ve never seen anyone hike with an umbrella”. He should of seen her gnat hat! 🤣🤣 girl has her equipment down pat! I said I haven’t seen anything like it since a catholic mass! 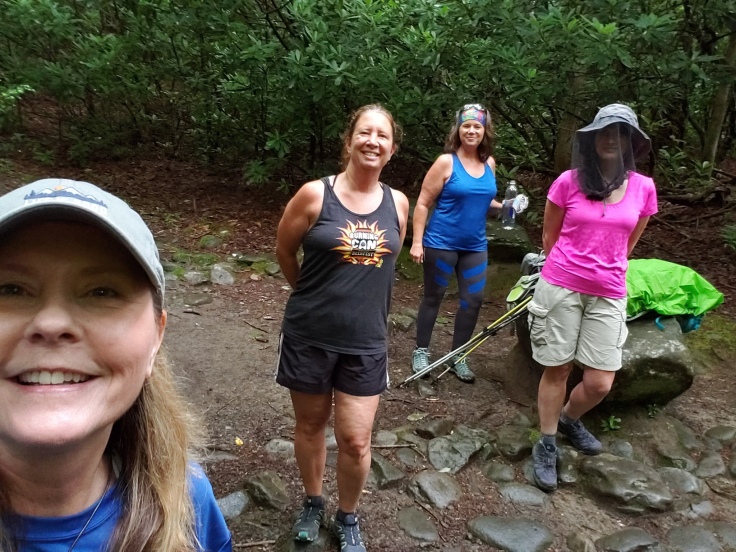 The trail just gets steeper. There is a small cave here. It’s raining pretty steady but that is nothing compared to the humidity. It is so humid I honestly think I was more damp from the heat than the rain.

Unfortunately it’s time to put on the rain ponchos. I was finding it difficult to hike. I’m not sure why? Heat, humid, rain, steep you name it. We were really separating about now. Brandi and I kept going ahead then would wait a bit. Then the last mile was the steep part. Very rocky trails.

I was pushing through as hard as I could. Brandi snd I stopped to talk to some people coming down. I asked if the trail went to the top or bottom of the falls. They said bottom but they did scramble to the top.

The trail went up rock after rock. Finally we arrived at the falls. There were some other people here. It was cold near that falls! Brandi and I took some pics. It’s the largest falls in the GSNP. 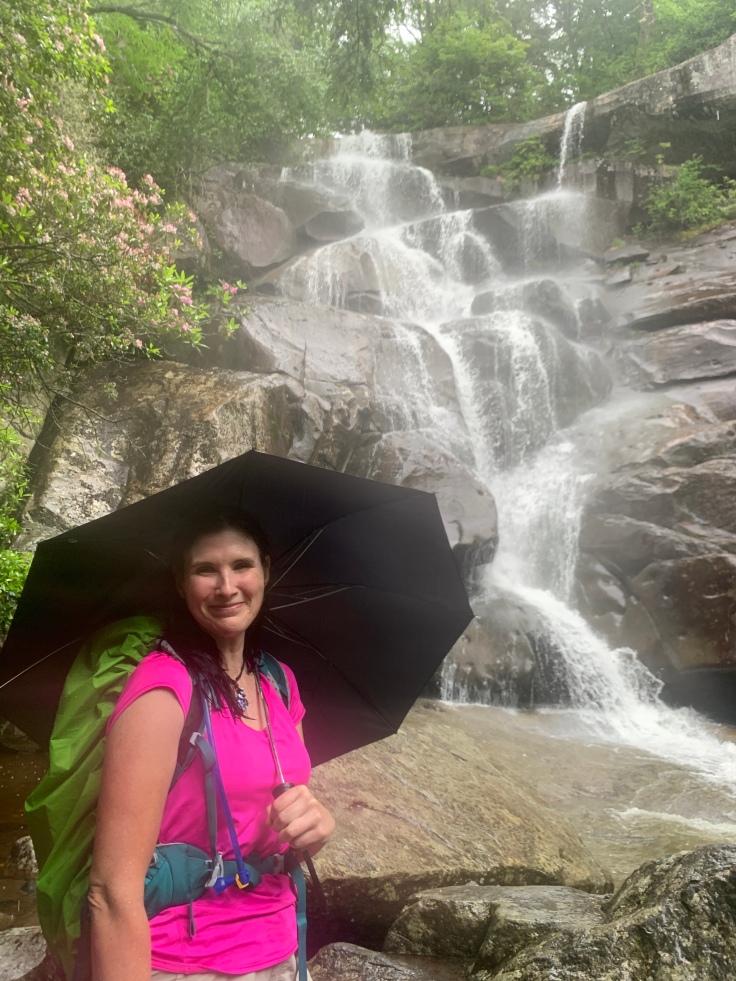 We hung out a bit. The base of the falls is a shallow pool of water which would of been welcome a half a mile ago! The temp has dropped so much I think not. 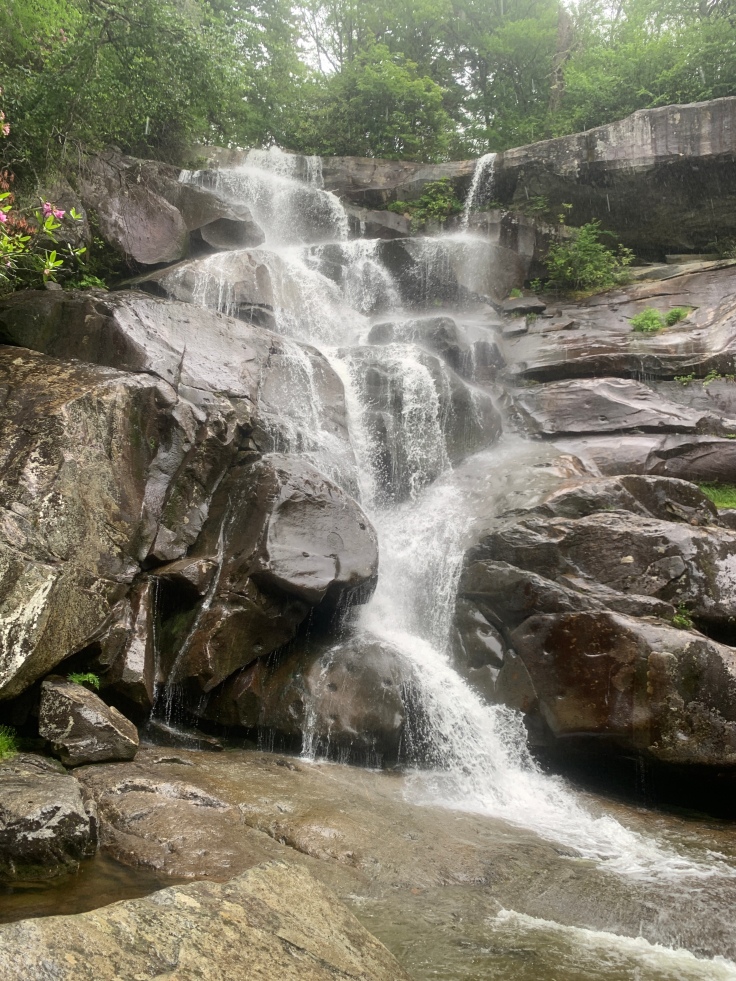 We turn around and start back down and here comes Sherri. 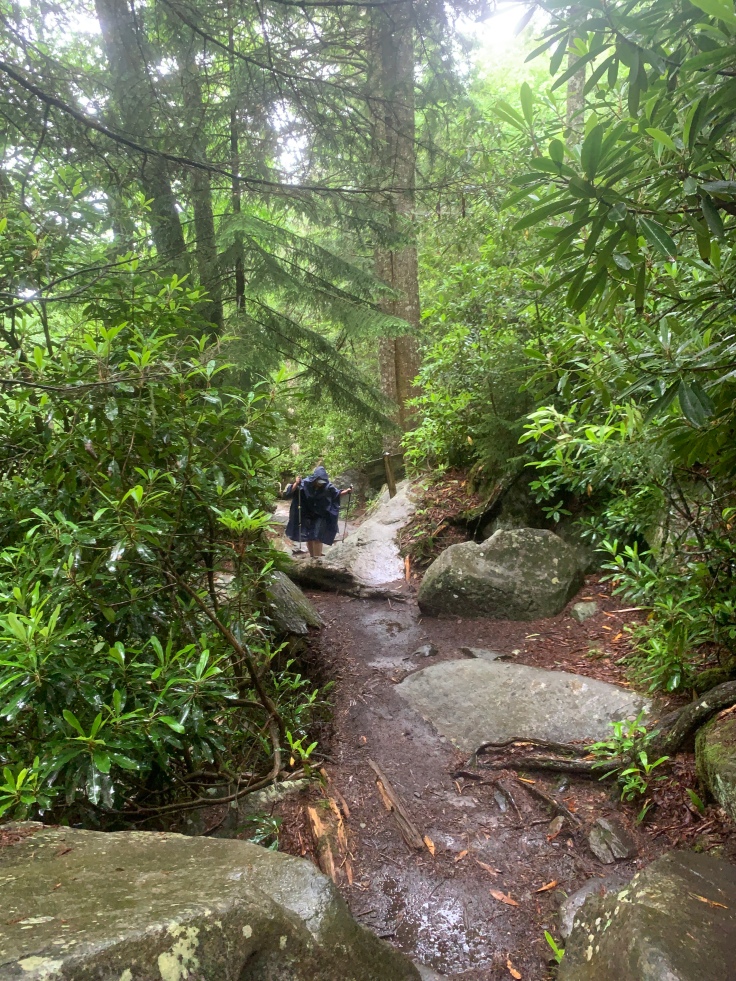 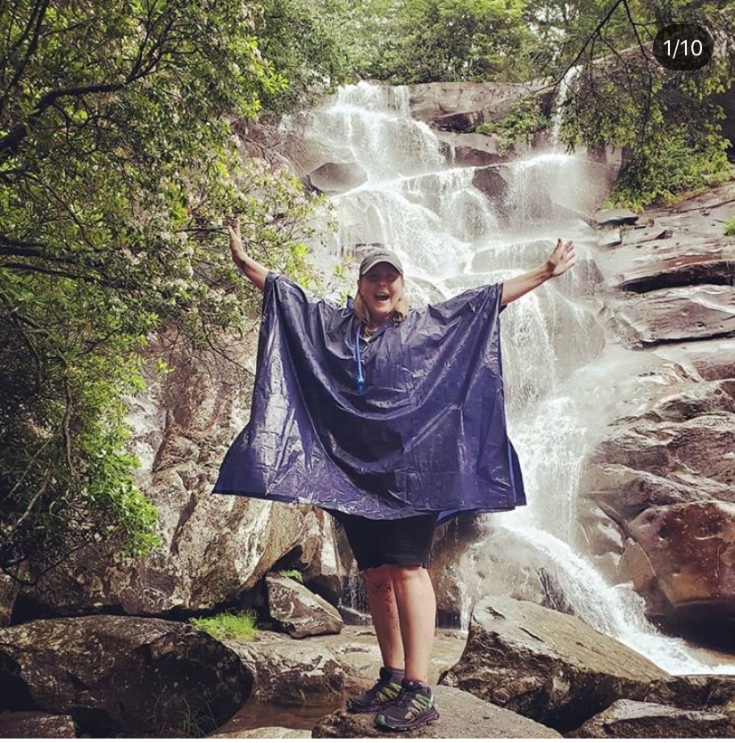 Then we did head back down. About a half a mile back was Mary. She was so determined to make this hike. Between the rocks and elevation she just ran out of steam. It was 4 miles back to the car.

On the way back through Gatlinburg we stopped at the Cherokee Grill Steakhouse for dinner. I can’t believe we went in their looking like drowned rats! 😬 it was very good. No one cared! Now off to the campground.

We are not going to Charlie’s Bunion Tomorrow as planned so we definitely have to come back another time. That will be the last major hike in the smokies in our list.