We decided this weekend we would go to the Great Smokey National Park to hike. Since it’s Labor Day all campsites in the park are booked so I found a nice older campground in Cherokee on the river called Wolf Campground.

We left bright and early and had camp set up by 11 am. We packed our stuff and Sherri and I headed to Clingmans Dome. It was only about 30 minutes away.

We drive right into the Great Smokey National Park and the views are pretty good already. 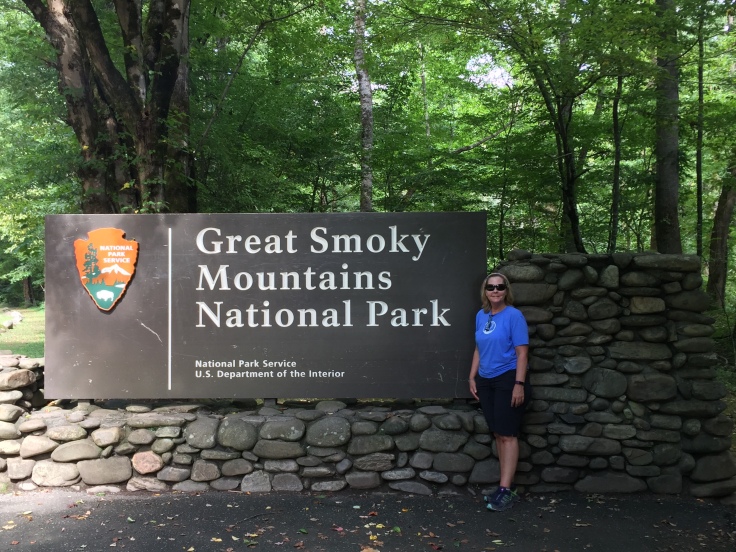 It’s a cloudy day so they are only so good. A left turn into clingmans dome and 7 miles later we are at the parking lot. There is a lot of people here. We are going to do Fourney Trail also. Which first? We ask the park ranger and he says to do Clingmans dome first because the clouds aren’t to bad. It’s a half mile steep incline paved road up to a 45 ft solid concrete observation tower.

Lots of views and wildflowers all along the walk. The Appalachian trail crosses near here.

The tower is very recognizable and sticks out. They could have made it fit in but I guess they went for longevity instead.

At the top it’s 360 degree views! On a clear day I read you can see 100 miles. Not today though. This structure is the highest point in the Great Smokey mountains at 6643, plus 45 ft for the tower. Still shorter than Mt Mitchell. It is also in both North Carolina and Tennessee. 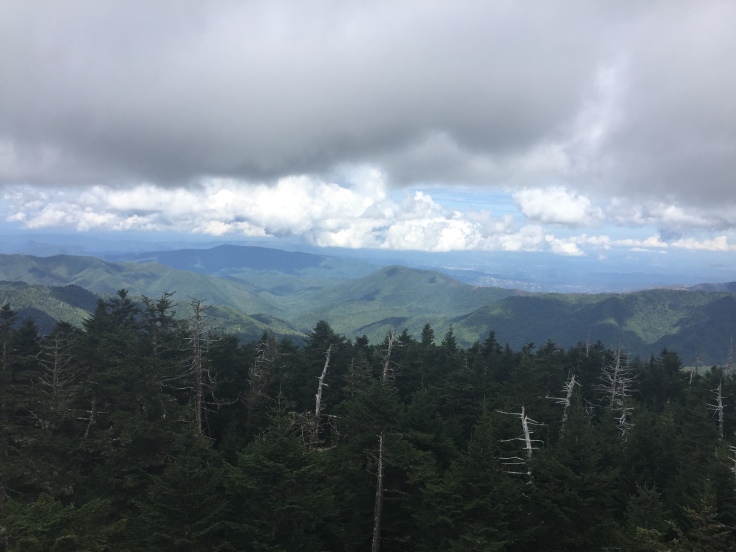 At the bottom is Forney Ridge Trail.

This is a beautiful trail through thick forests and rock walls. It has a lot of steps built in. We didn’t see anyone e for a longtime. We are only going 1.8 miles to Andrews Bald but this trail keeps going down. 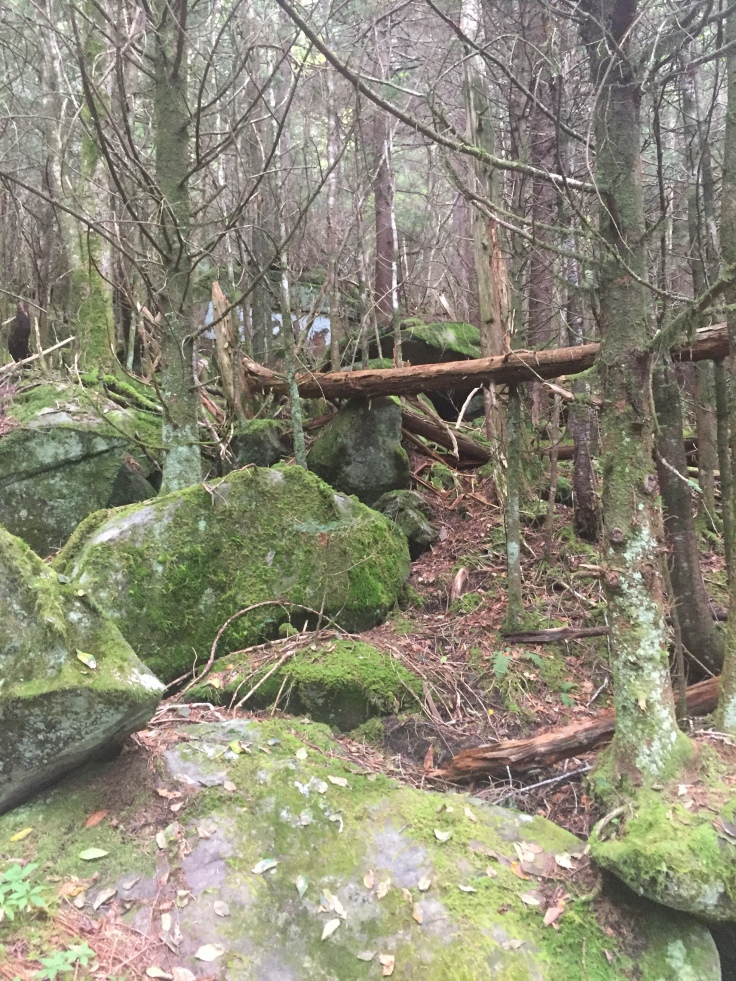 Some points are pretty dark and we got a little, really just a little, nervous about bears. After a bit you really notice that this trail is really going down and what goes down must go up!

I really liked this pic of a big red leaf caught on a spider web!

We reached Andrews Bald. To me It really wasn’t a bald just an open area. We sat down had some lunch and shortly started seeing other people coming down the trail.

Going back up the trail was a bit challenging. It was an elevation gain of 514 ft per mile. When I get tired I like to add my music and I danced half way up the trail which entertained Sherri who hasn’t hiked in a while and was breaking in her hiking legs. She didn’t realize it but it made the time go faster! About 1/2 way up there is a sign and somehow we missed it. Almost at the top we see a guy coming down and she asks him if he passed that sign. I thought she was kidding because I know we are almost to the parking lot. But she’s not she is actually still looking for that sign! When she figures it out she’s like “hell yea! I’m happy now!” Lol 😆 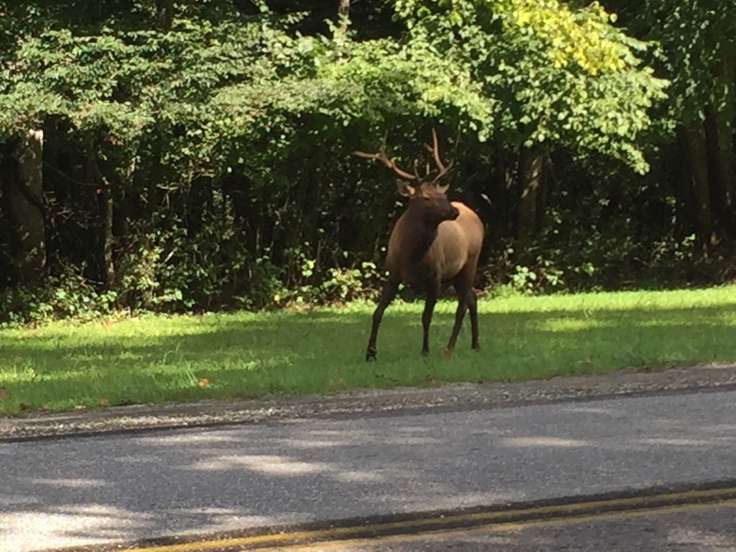 We got back to the campsite and Mike had been chilling with the dogs by the river. Dogs are not allowed in the Great Smokie National Park. He started the grill and we made some awesome ribs and corn on the cob! 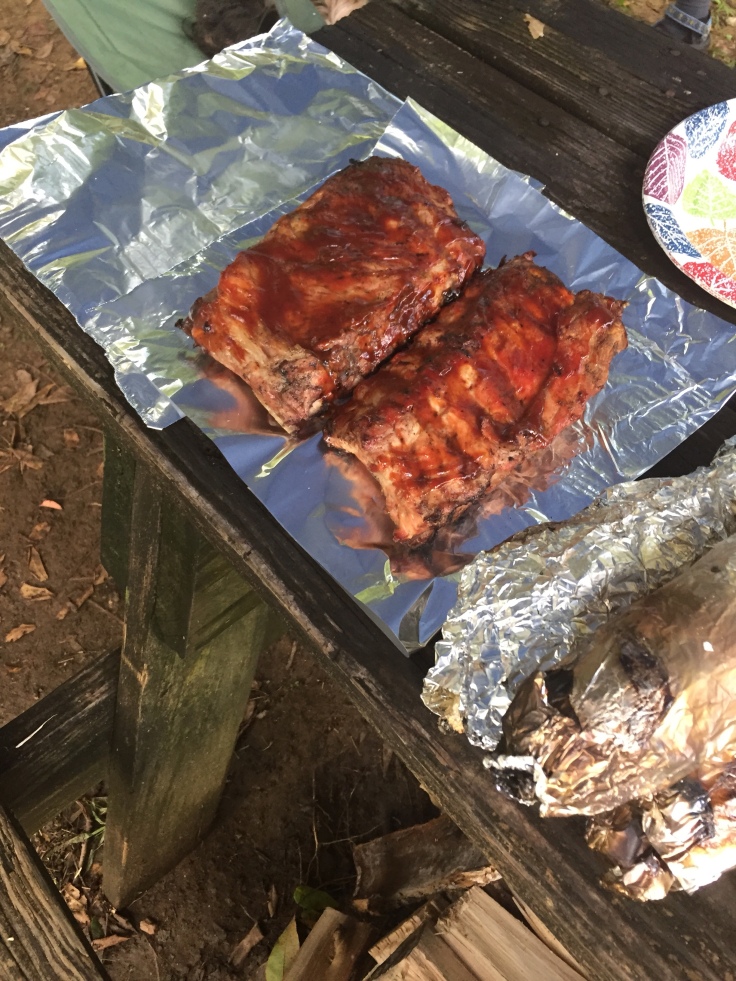 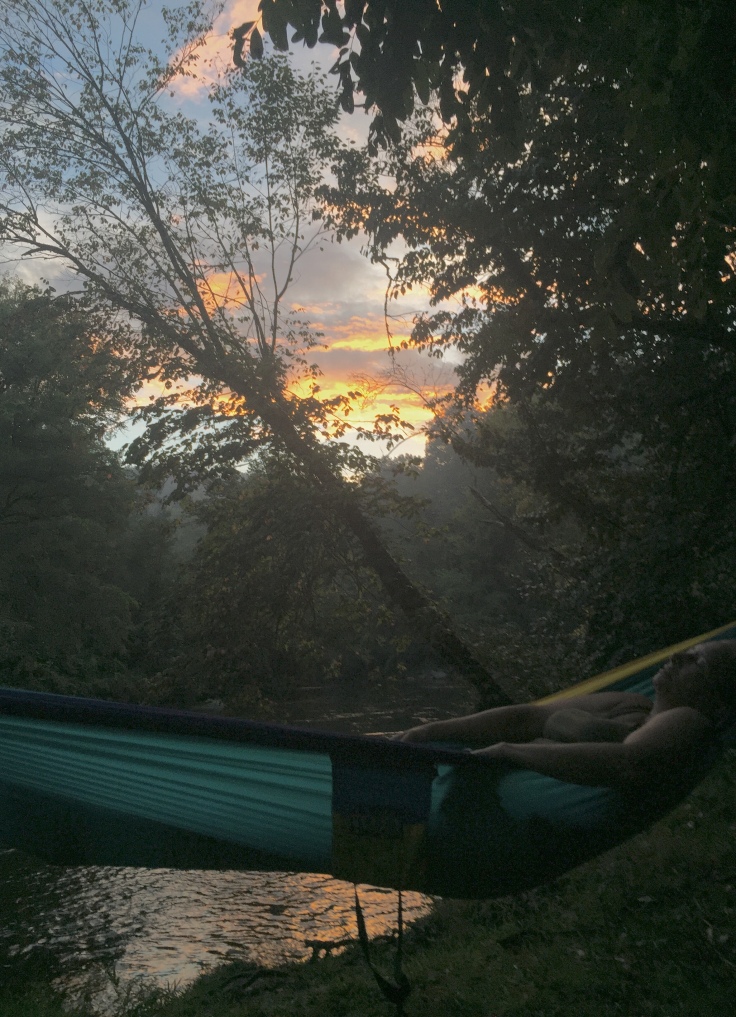 That was a long day! Getting up early, long drive, setting up camp, hiking, dinner and now some chill time and bed by 9!!! Our big hike is tomorro!