Brandi, Christy, Nick and I

The last two weeks there has been lots of rain and snow in the Gorge. We weren’t sure how the Ledge Trail was going to be. We met at the Spence Ridge parking area. It was about 40 degrees so I decided not to wear or bring my jacket even though everyone had one. Brandi picked this trail. She likes to pick the ones that are less traveled. They are some of the most fun ones for sure! we never see another person on her trails!

We headed up a nice wide trail then turned onto the Ledge Trail.

The trail is more of a footpath than a trail. We got off the trail a few times but this part was walking up a rather steep side of the Mountain. 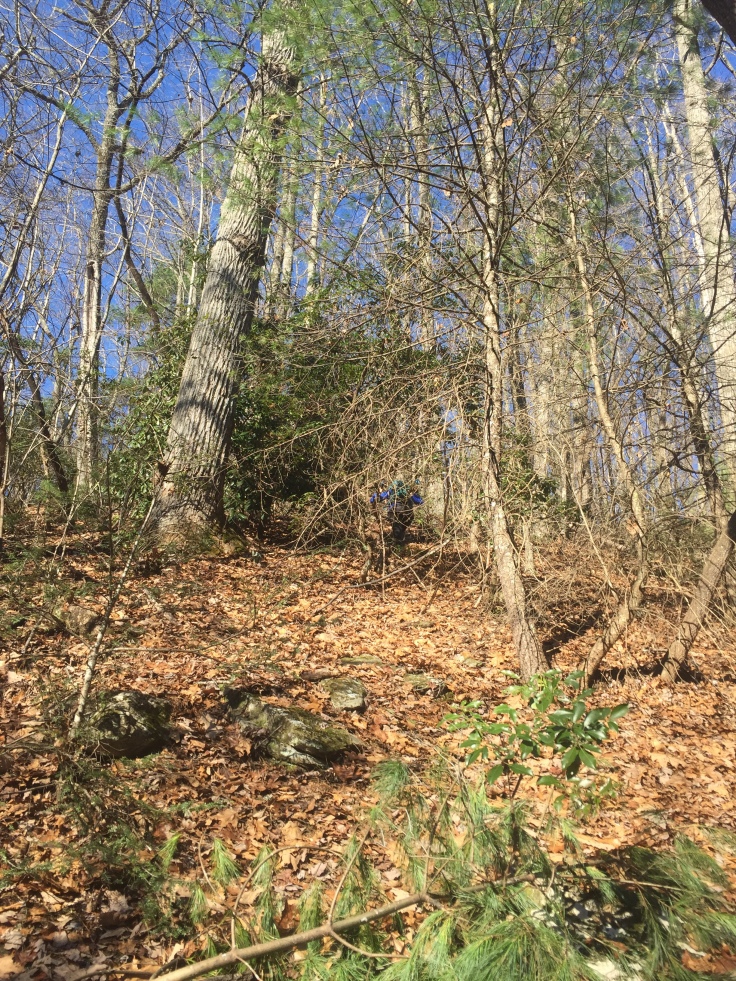 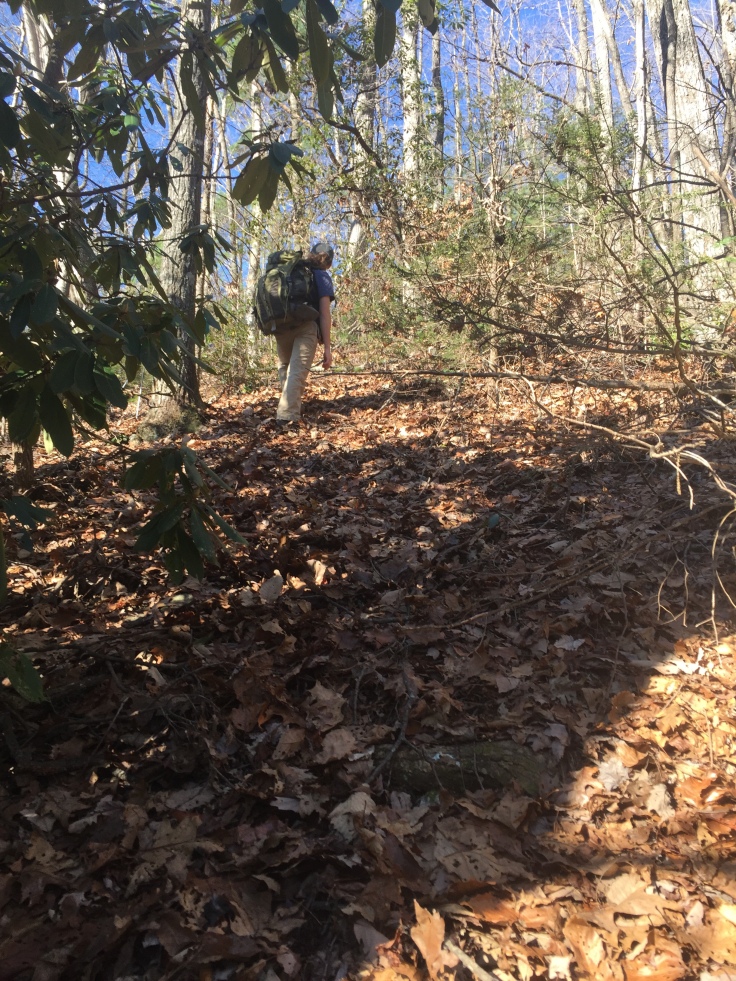 There were Cairns at some of the turns. They are very suttle. Other than the Avenza map that would be the only way to follow this trail. 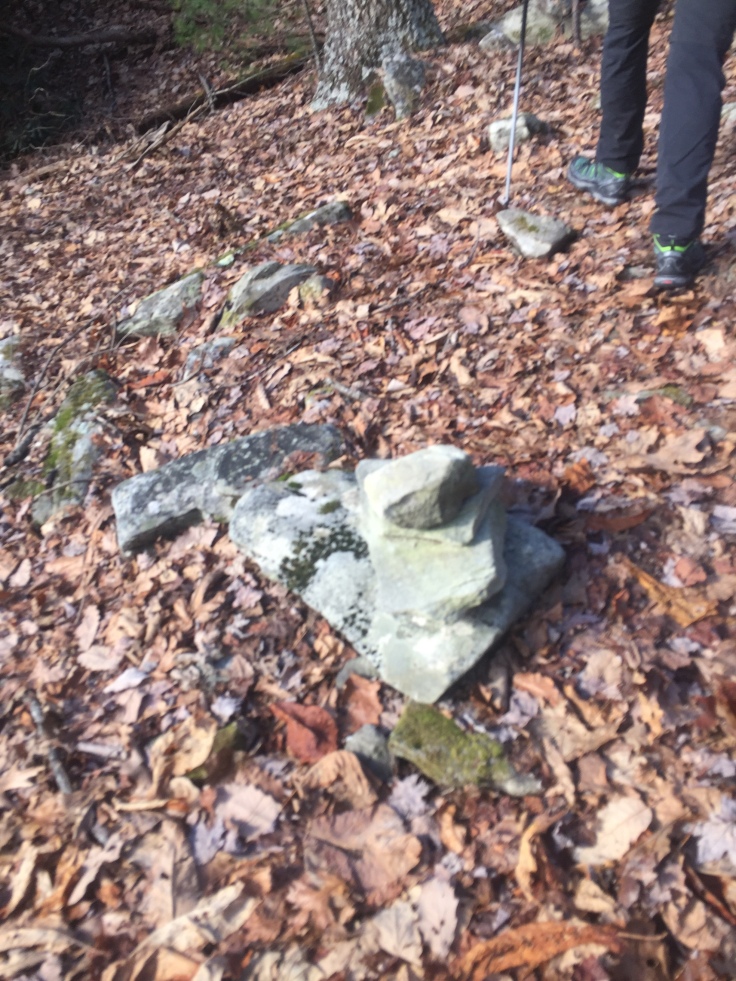 We had to cross a water source to get back on the path it was pretty steep! 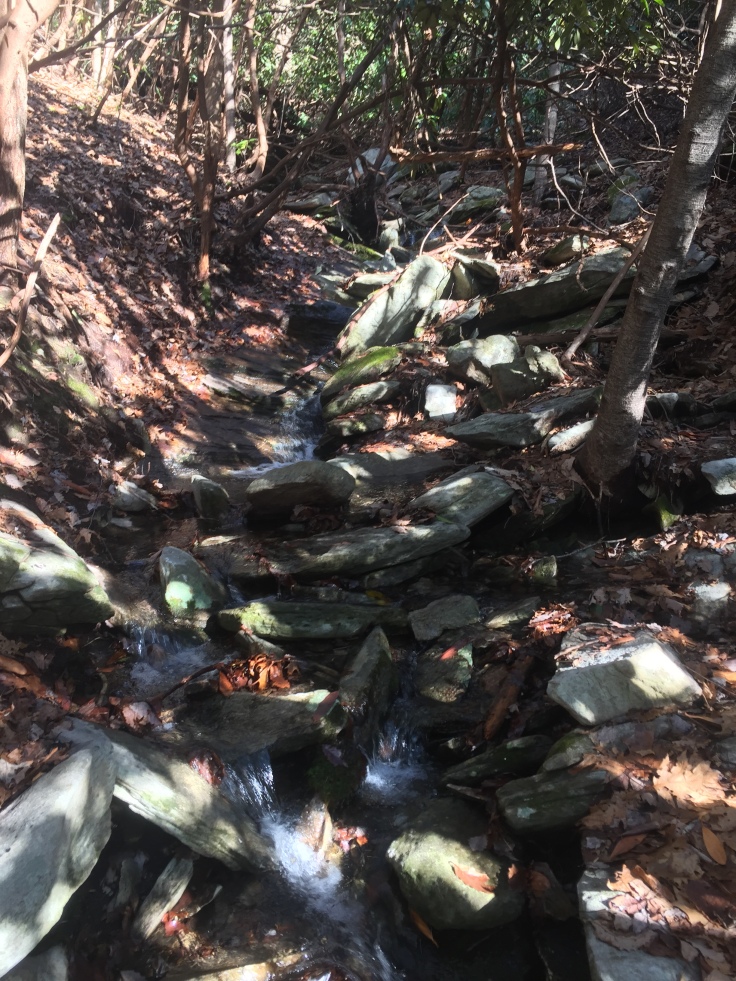 After a bit Brandi had the idea to take a shortcut and bushwhack up to the Ledge Trail to cut off some of the trail. It was fun cutting through the rhododendrons. We ended up back on the Ledge Trail. just a short time after this we begin the rock climb!

Christi works with birds. She knew each bird we heard by name. She would stop and listen and tell us which bird it was. Between her and Nick there wasn’t anything in those woods we couldn’t identify and that’s for sure! Nick knows every plant, snake, spider, bug and probably the birds too. 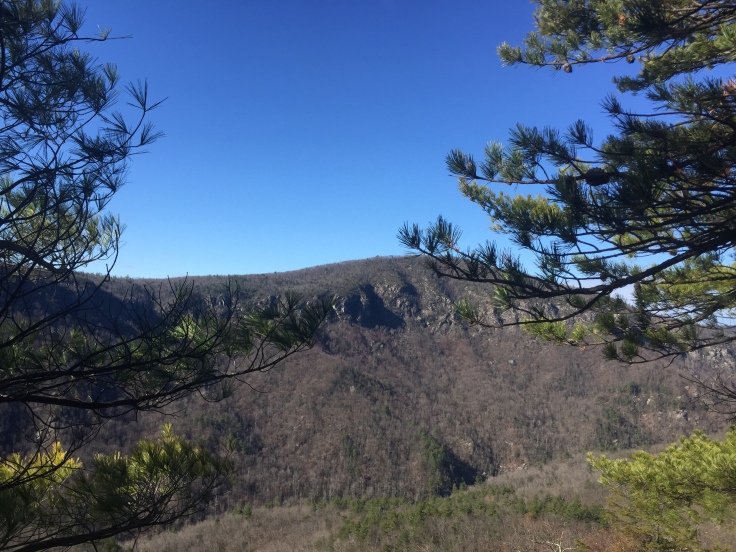 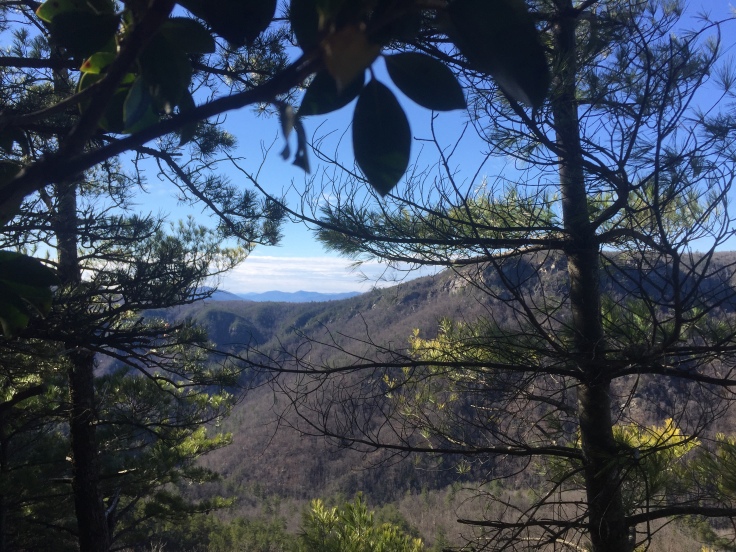 This trail goes along the base of Hawksbill. Most of the way we follow the huge rock wall. We are literally walking up a rock path.

This part is so much fun! I love to climb like this! I do get a little Whinny towards the end. I was counting the distance in my Avenza map. they say 1 mile in the gorge equals 2 miles and 1 hour equals 2! 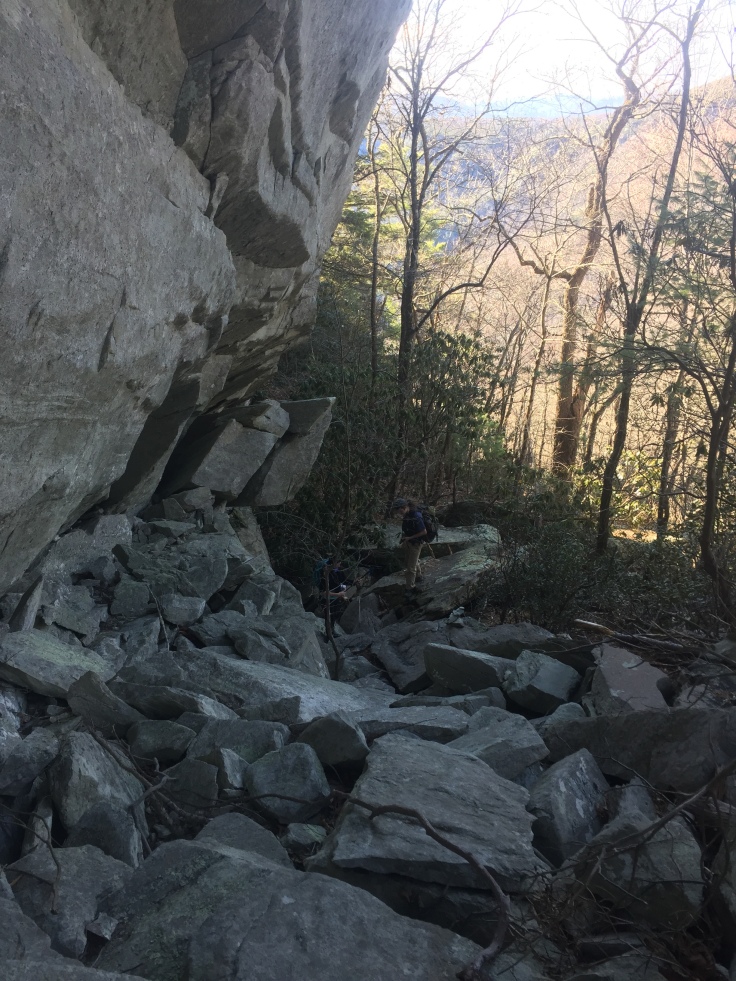 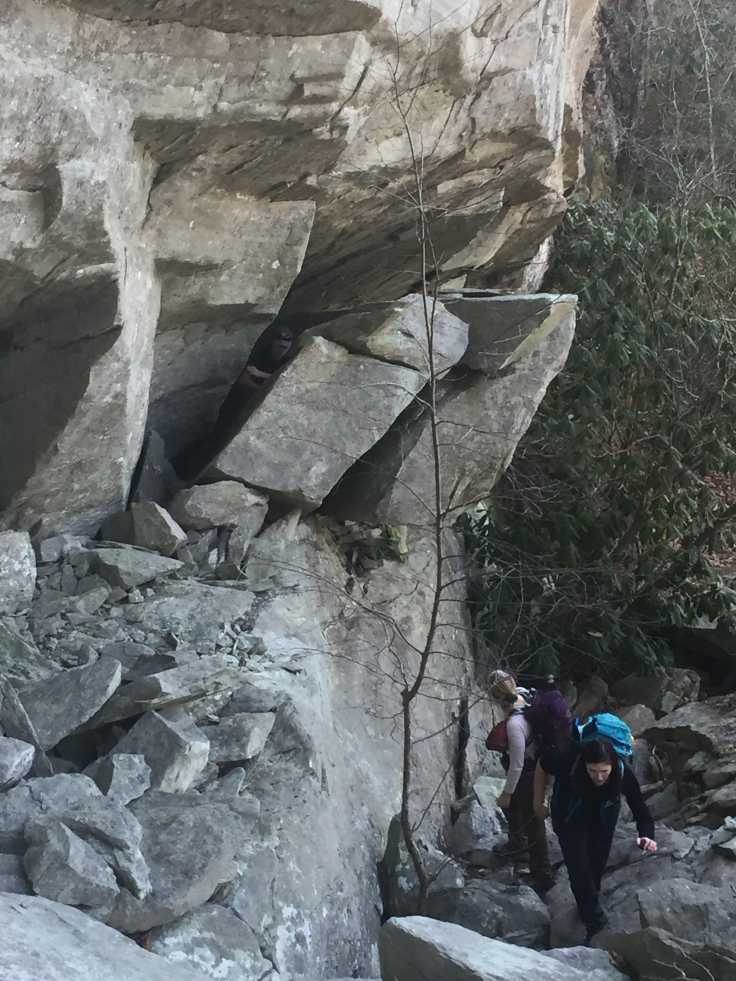 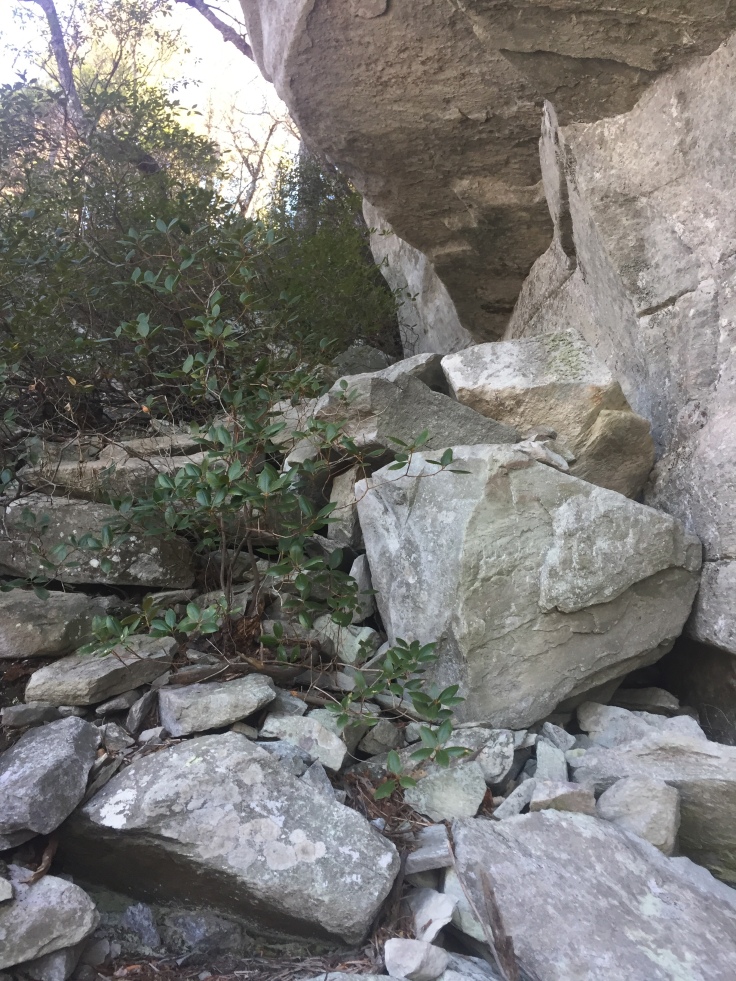 We were climbing here and I tried to get up on this rock ledge. I chickened out but then Nick tried. He easily climbed up on this ledge. Brandi and Christy were down below.

I climbed ahead along the wall and they followed me. Turns out I went the wrong way. 😡 It came to a steep end with snow at the base! We went back down the hill mostly on our butts because it’s steep going down! That’s why i don’t like to lead! We took the correct trail away from the base to the snowy area. 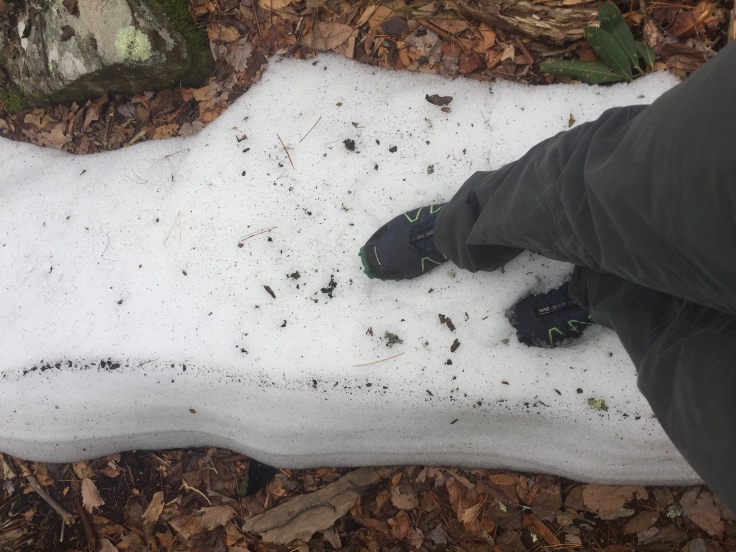 Some of the drifts were about 4 feet deep along the wall! As we walked up we had to walk on some of the frozen drifts and at times fell in past our knees. Otherwise the snow was gone from this area.

The areas where water ran down the rocks on this side were frozen into icicles. It was really beautiful! 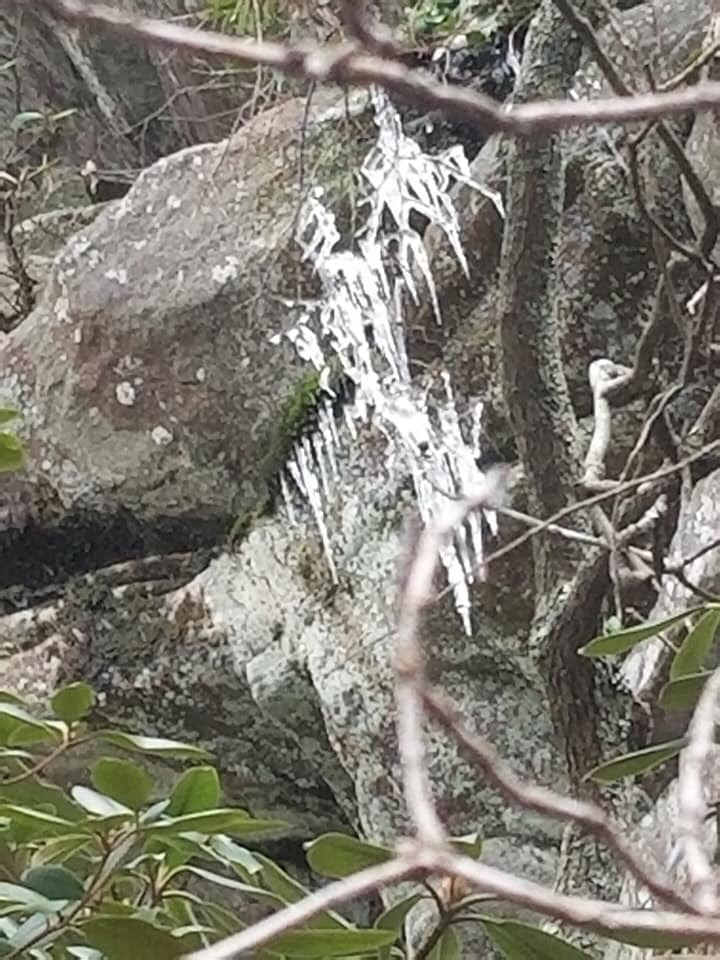 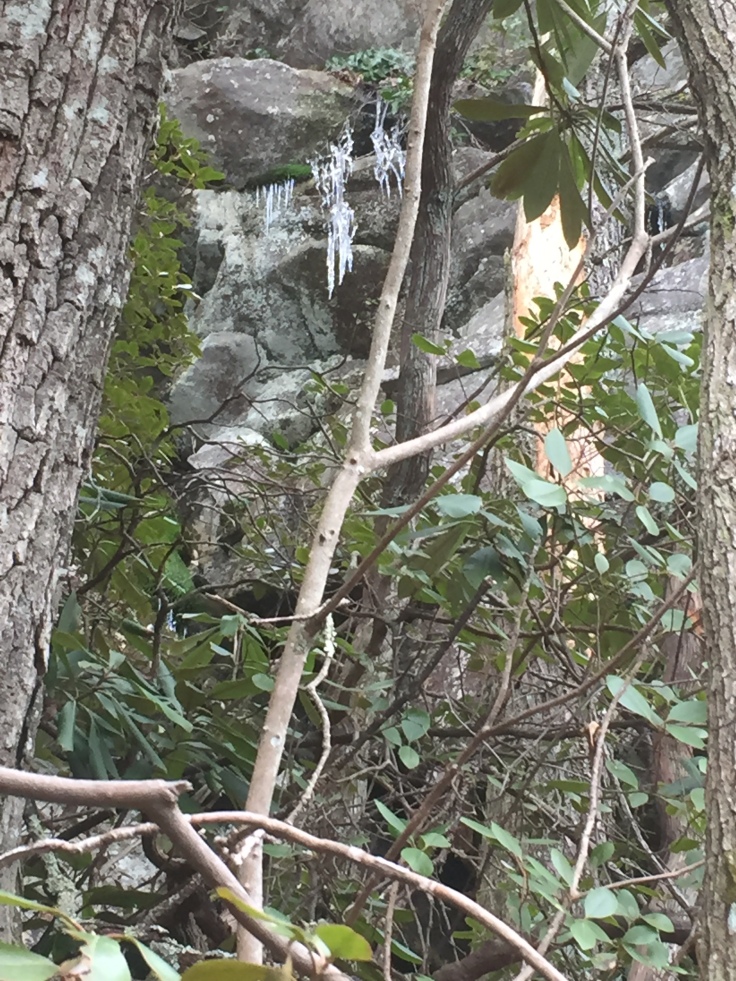 We were nearing the trail up to Hawksbill and came to what they call the Pregnant tree. Trees are amazing they can grow anywhere and anyway.

We continued our trek up the rocks and over some storm blow downs. It was was quite a climb and I was getting tired. Christi and Brandi thought this was a good place to rest. Tree huggers!! 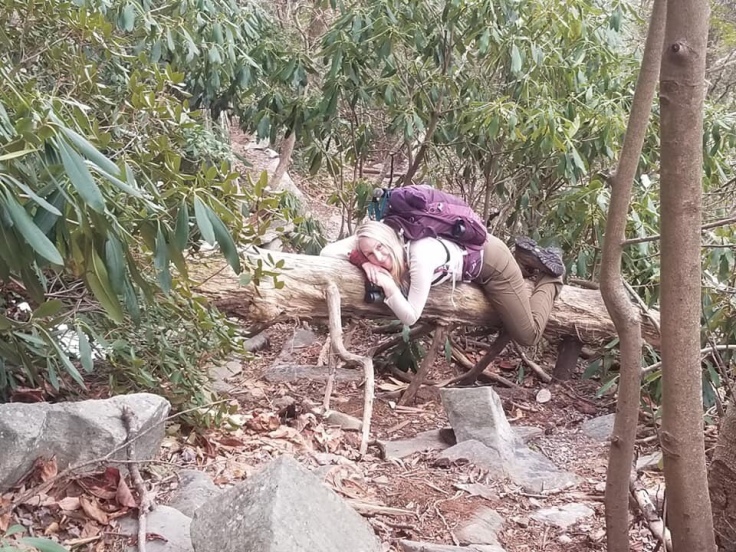 We kept climbing up. The rock formations and the view up the wall was just amazing! How do all these boulders end up here? 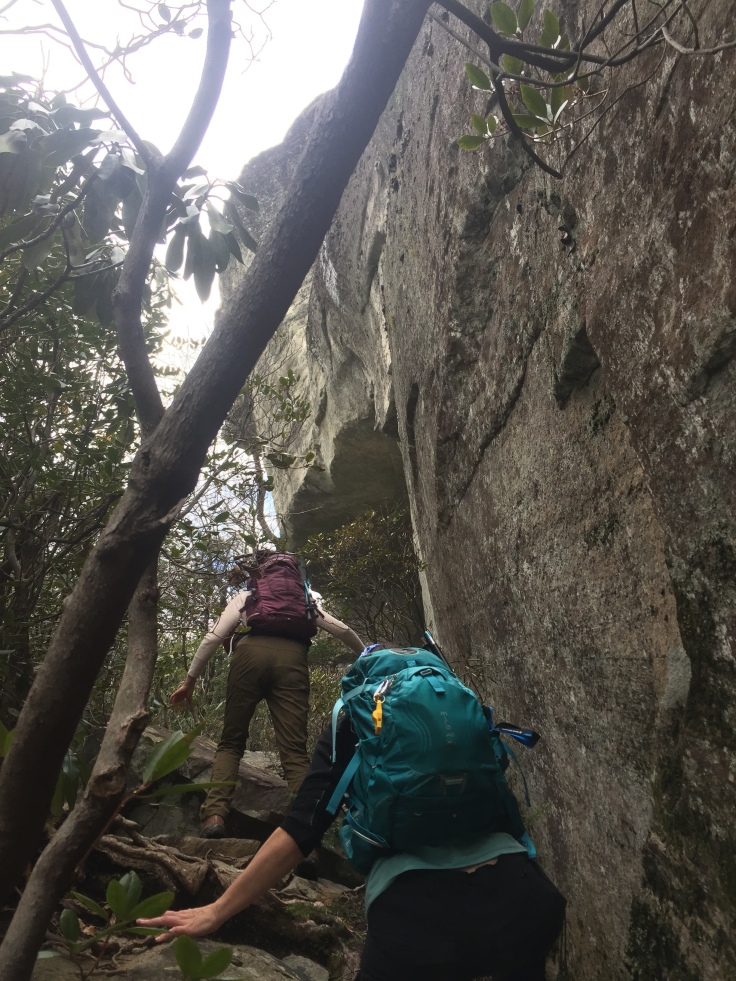 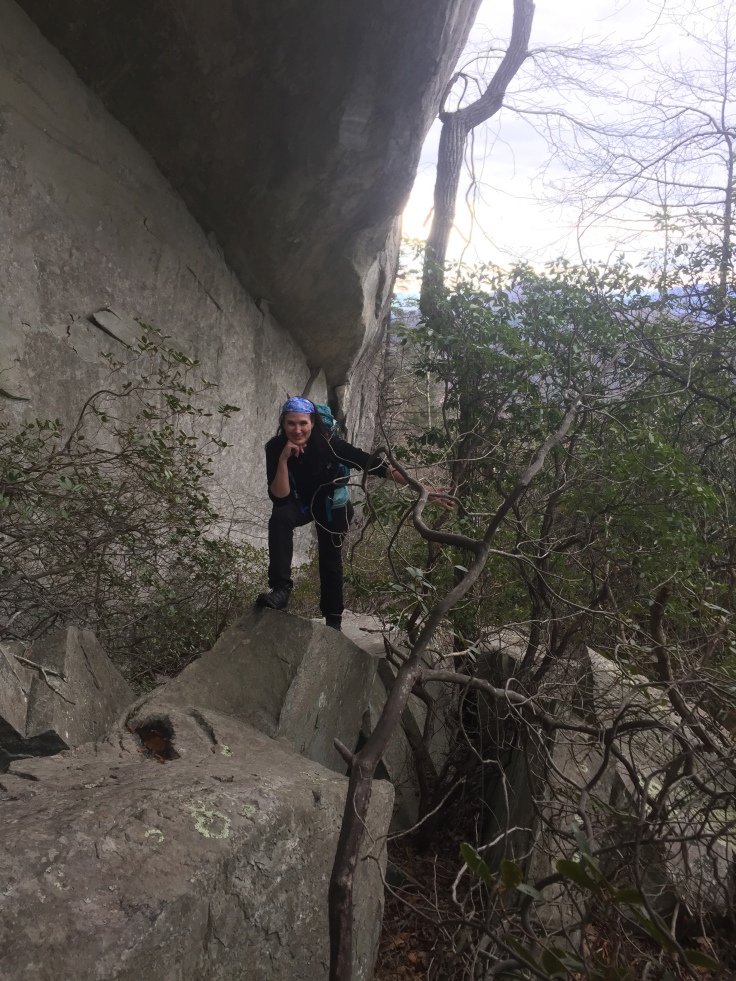 We kinda got off trail here also but climbing the rocks was much more fun!

Then there it is the Hawksbill Trail. We make a right and follow the trail to the top. It’s my first time up here. At the top-ish there are a number of branch off trails. We take the one to the top. It’s a 360 degree view! Completely amazing! possibly the best views in the Linville Gorge!! We can see Roan mountain, the Black Mountains, Table Rock and more! 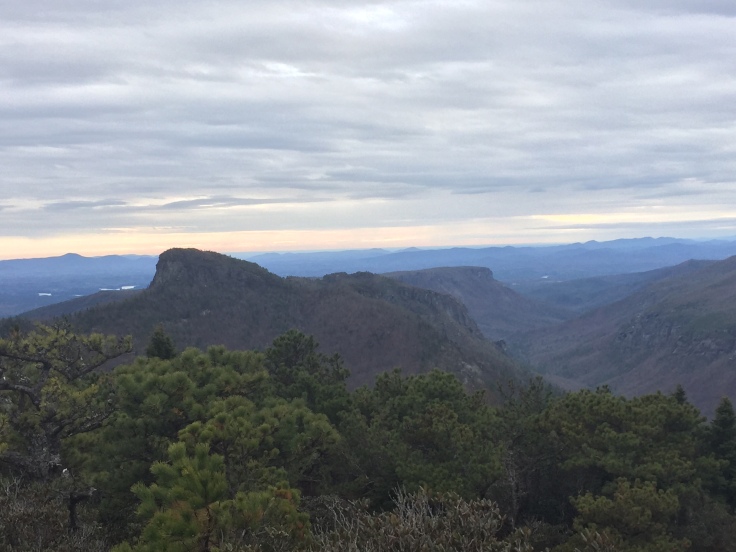 It was cold and windy up there! I regretted not bringing my jacket instantly! I took out my sandwich and climbed down under the rock they were taking pictures from to block out the wind!

Nick took out his camera and took the best pics of the day! He took some for a couple guys up there and they took some of all of us. 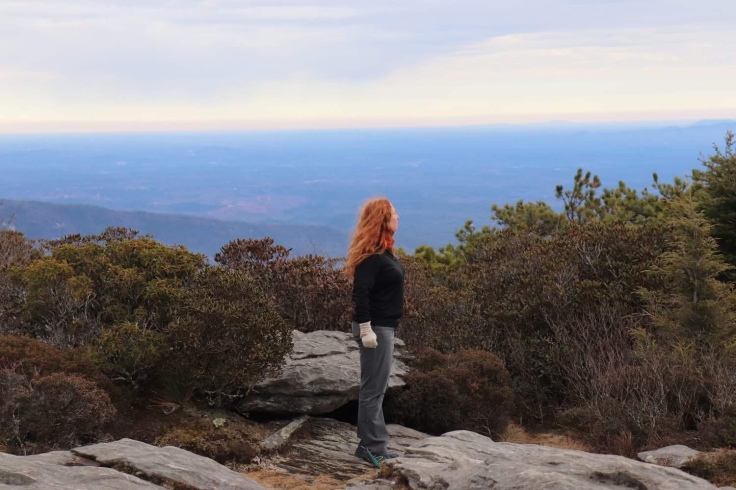 I finally decided to look in my back pack for some hand warmers. I found a thin jacket and a pair of wool socks!! Only reason I had these was that Brandi told me to bring them because we might have to get wet. Heck yea! Wool socks for mittens! They were warm!!

Fashion doesn’t count when your cold ! 🤣 We hung out a little bit more then took our walk back down Hawksbill Trail. At the end of the trail we arrived in Table Rock Rd. From here we had to walk the road back to Spence Ridge. I was still wearing my socks which Brandi thought was hilarious! They were dangling off my arms and it wasn’t even cold anymore. 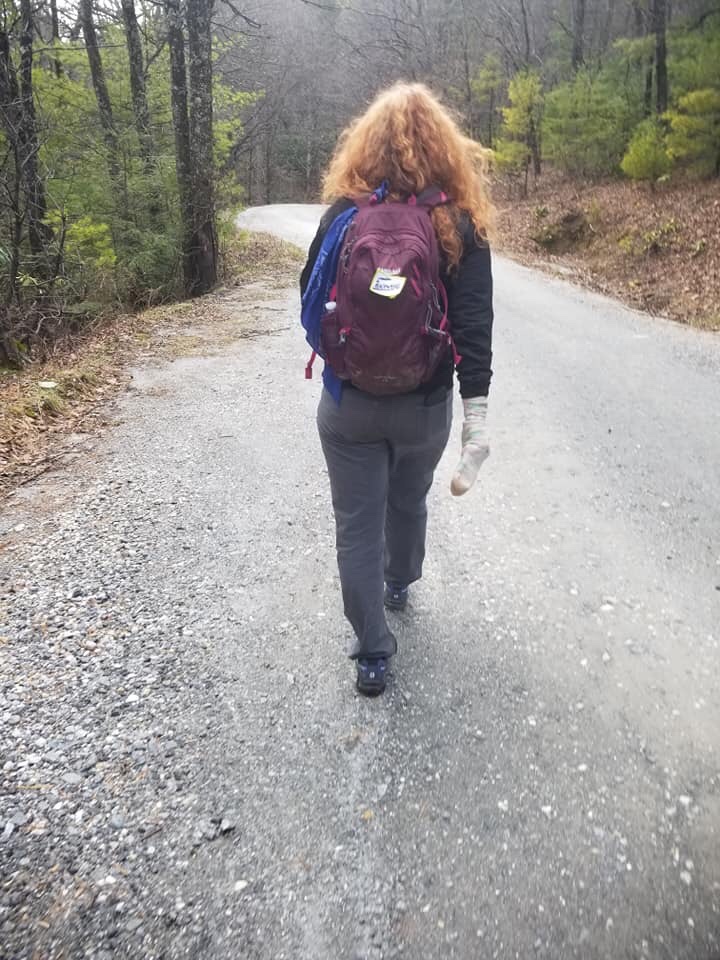 There is something so special about the Linville Gorge Wilderness. Each hike and every view is awesome. I meet the best people in this area!

2 thoughts on “The Ledge Trail and Hawksbill Trail”