It is cold! Our day started off at 16 degrees in Western NC. Lisa bought these buffs for us. 🤔

We headed west of Brevard in the Middle Prong/Shining Rock Wilderness of the Pisgah National Forest. All of these waterfalls were off Hwy 215 between Rosman and Canton NC.

As we were coming up 215 the rock walls were all frozen solid with Icicles hanging on them.

It looked beautiful! Then we ran into some ice climbers right along the road! This was crazy. We can hear the water dripping but they seemed to be having fun.

We slowed down and said Hi, then we continued down the road to our first couple of waterfalls. The first path we took had 3 waterfalls on it. It was on the MST for a bit then we crossed Bubbling Spring Branch. We went left and crossed again. The water is high and the rocks are icy so careful crossing is necessary! Lisa dropped a foot in but was wearing boots that were waterproof!

We are following Kevin Adams’ waterfall books directions. These waterfalls do not have a trail to them. It’s mostly climbing over, under and through rhododendrons. The first one is Lower Bubbling Spring Branch Falls. It’s frozen!

From here we really are scrambling to the next one which is Upper Bubbling Spring Branch falls. Lisa went ahead mowing down branches like it wasn’t nothing! Unfortunately I did not have a hat on or a pony tail so my hair kept getting caught in these dang bushes! From a distance I could barely hear Lisa yell. Either she found it or fell in but either way I had to press on!

Someone had flagged this part of the trail! It was still a hard climb down and across the creek to get a good view. We managed to get across without getting wet!!!

It was a real nice one! Now that trek back through the rhododendrons!

Just as we got back to the creek crossing two guys were coming across. They were going up the MST to Green Mountain. To find Mount Hardy Falls we had to go that way also. We followed them up the trail. We were going for a while and I decided we went to far. We re-read the book and went back to the part where it went to the road. We got on the road walked back to the truck and started over. My bad! Turns out we were almost to the turn off anyway! We went up the trail to where two creeks fork. It says take the right fork in the left side. Hmmm we cross and. It says follow the stream and it’s not a hard scramble but no path. Here we go stomping and climbing through the rhododendrons again! We can’t find it. We re-read the book. Now I’m two for two on big directional blunders! 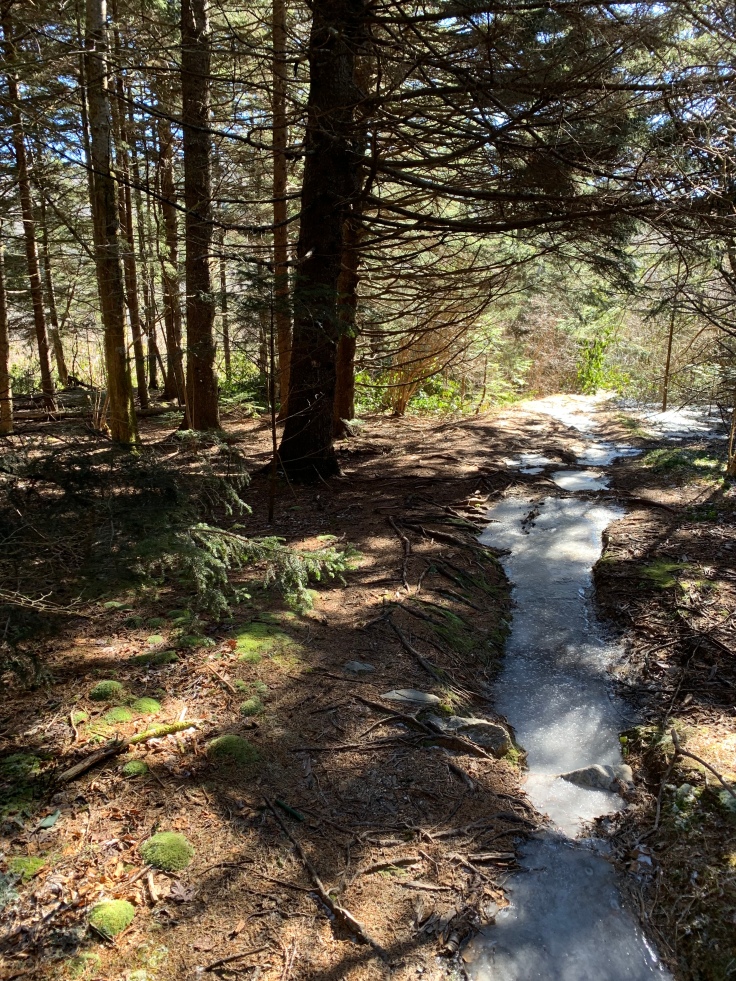 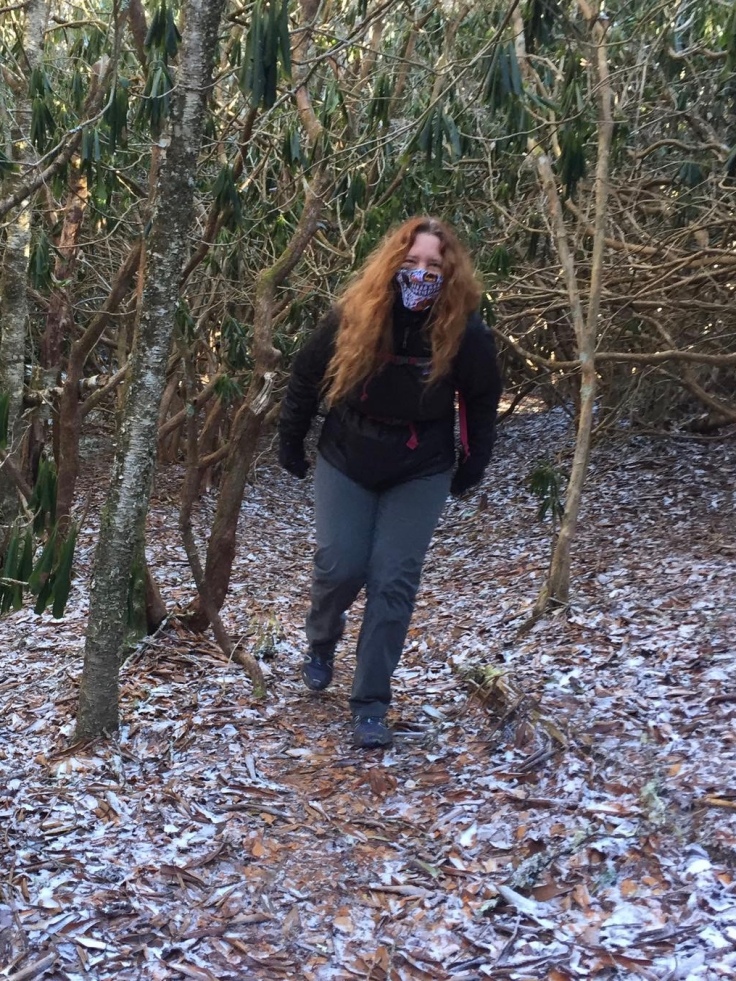 We go back to the stream crossing and decide to go across and straight this time. There is a faint path up sort of following the river. After a bit we heard it, then we saw it! It was massive!

We had to climb up the middle to get a good view.

We took a bunch of pics. My new phone has a portrait setting. I found out that when it’s on that setting it takes great portraits but blurs the background.

Time to head back to the truck and head to another one. We keep north on 215 till we come to 4.1 miles from the BRP. (Blue Ridge Parkway) That’s how all his directions are. Either from the BRP or from Hwy 276 because there are no signs. We come to 4.1 and it says head south to end of the guardrail and climb to an old logging road. Well we park next to Sunburst Falls which is at a huge bridge. We head north to guardrail and look down. Nope this can’t be it. I was here before with Ashley and Daina. We saw a guy parked on other side of bridge so we go park there. This is Sunburst falls. 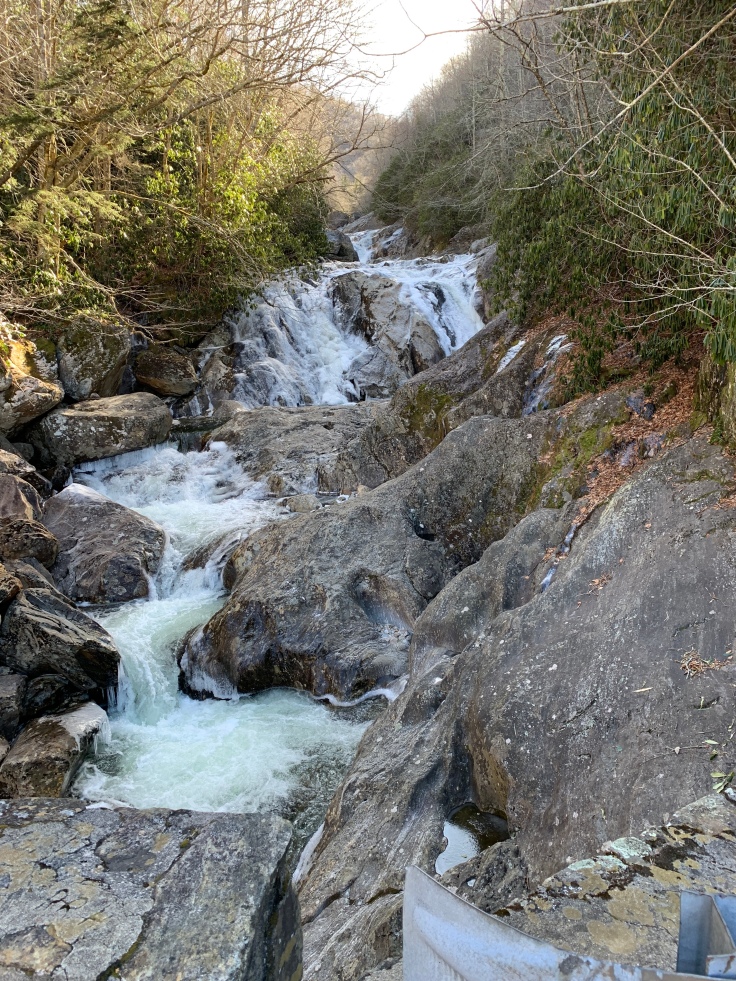 We parked went to the end of guard rail and scrambled down to river. It was a long way down! We went back and forth looking for the falls. Nothing! Lisa sits down re-reads the book. It says “climb” up to logging road? We went down!! Now it time to climb back up! It’s straight up! 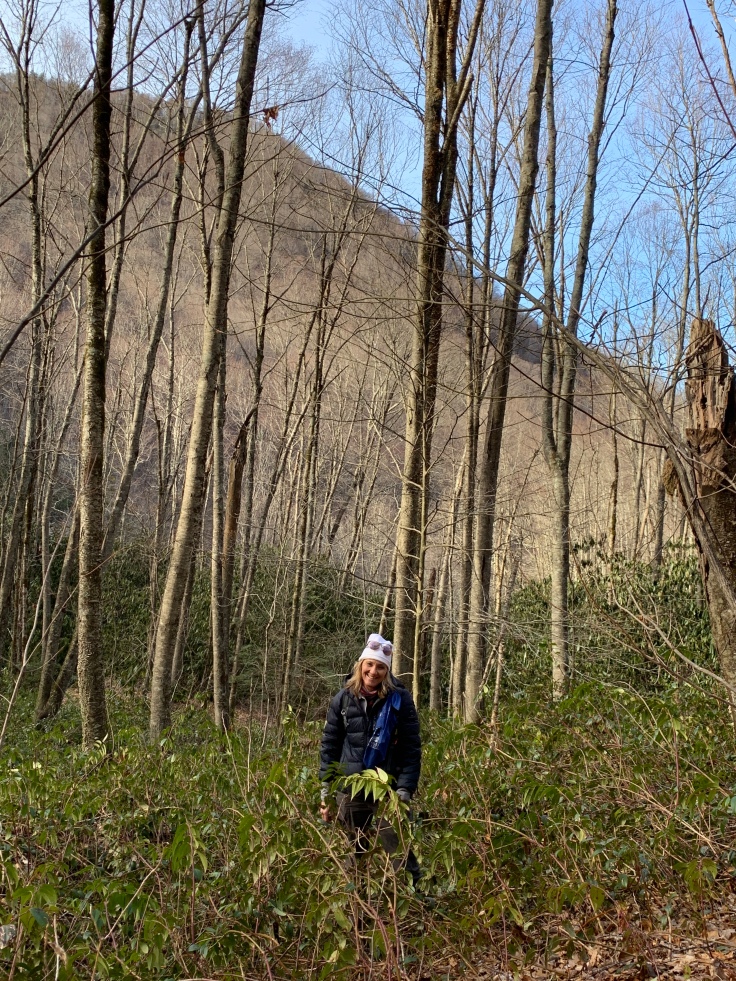 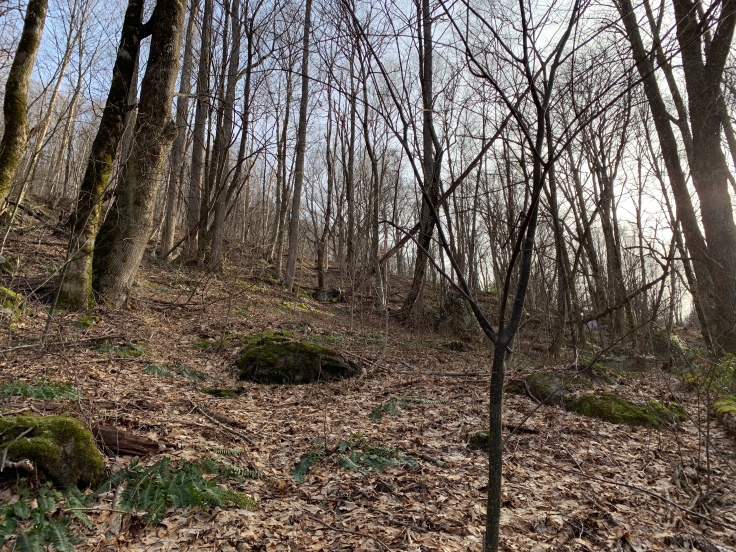 We don’t ever want to give up. We decide to drive back to the previous guardrail. Right there is a climb up!!! 🤦‍♀️ We seriously suck at directions! We head up to the logging road then it’s a nice level path to the falls !!! All that climbing for nothing! This is a big falls. It has Lower Sam Branch Falls. 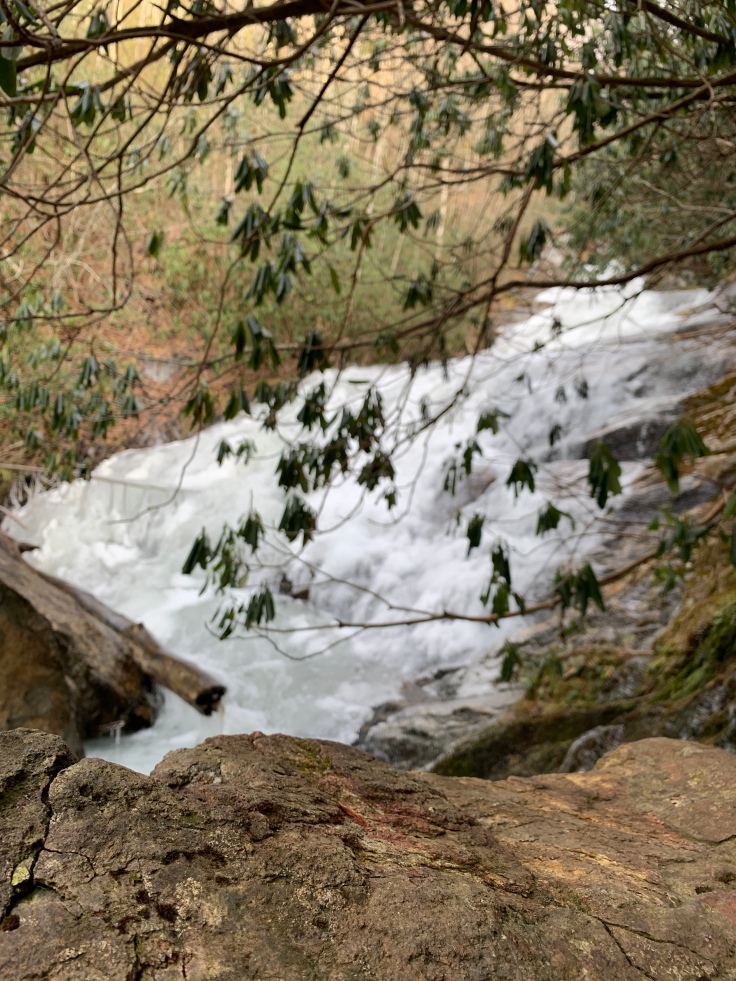 To get to Wash Hollow falls we have to cross. There is no possible way to cross and I don’t ever try.

Lisa is trying hard to figure out how. That falls is just over there and we can’t get to it! 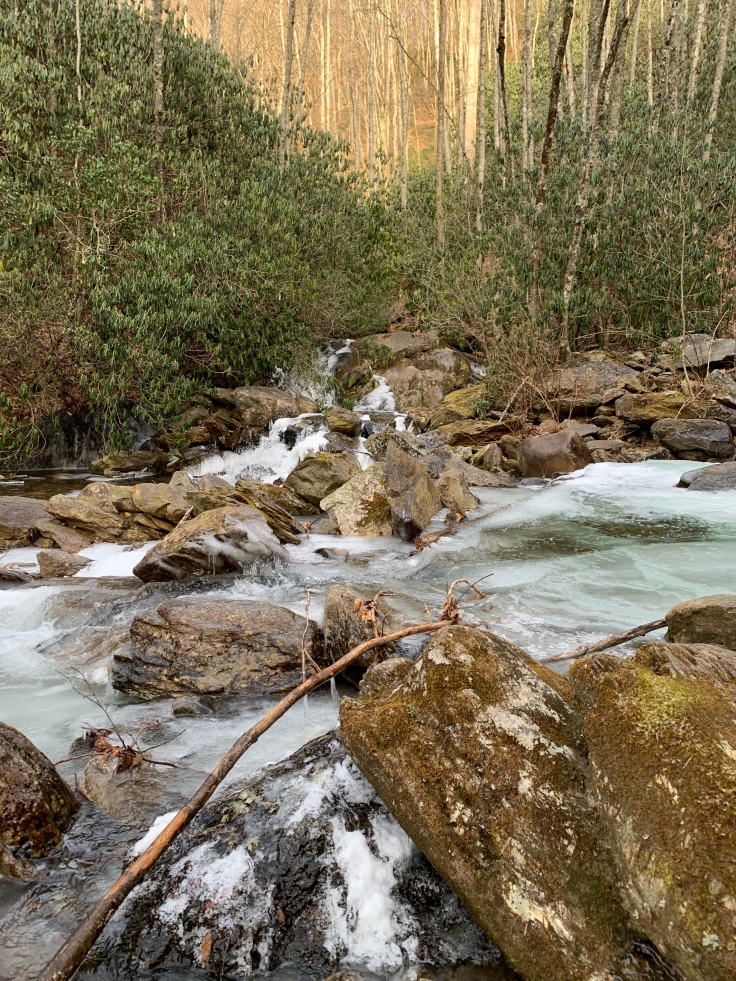 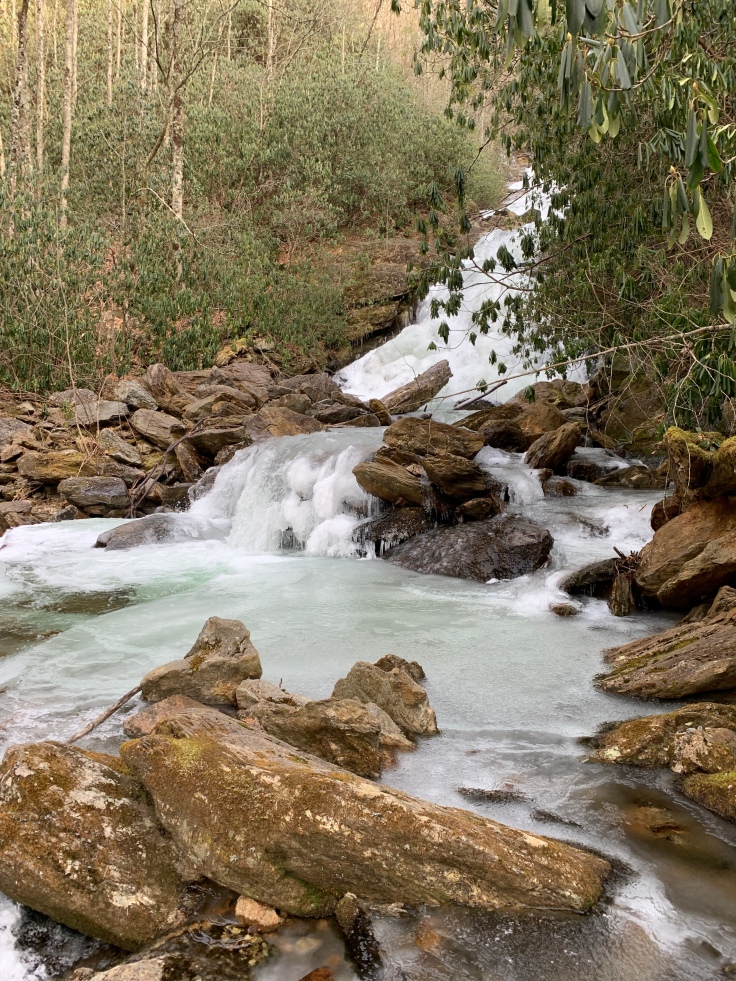 We will have to come back when we can cross so we can cross it off our list. We head back to the truck and Lisa says one more? I am so tired! I really am done but what do I say? Ok! We check the book and there is one up the road that is close to the road.

We parked then started our hike up to it. It looks like we are walking through a dried up riverbed. Very rocky.

This one is called Little Bird Falls. It wasn’t as frozen as the others.

It had some cool frozen areas though. 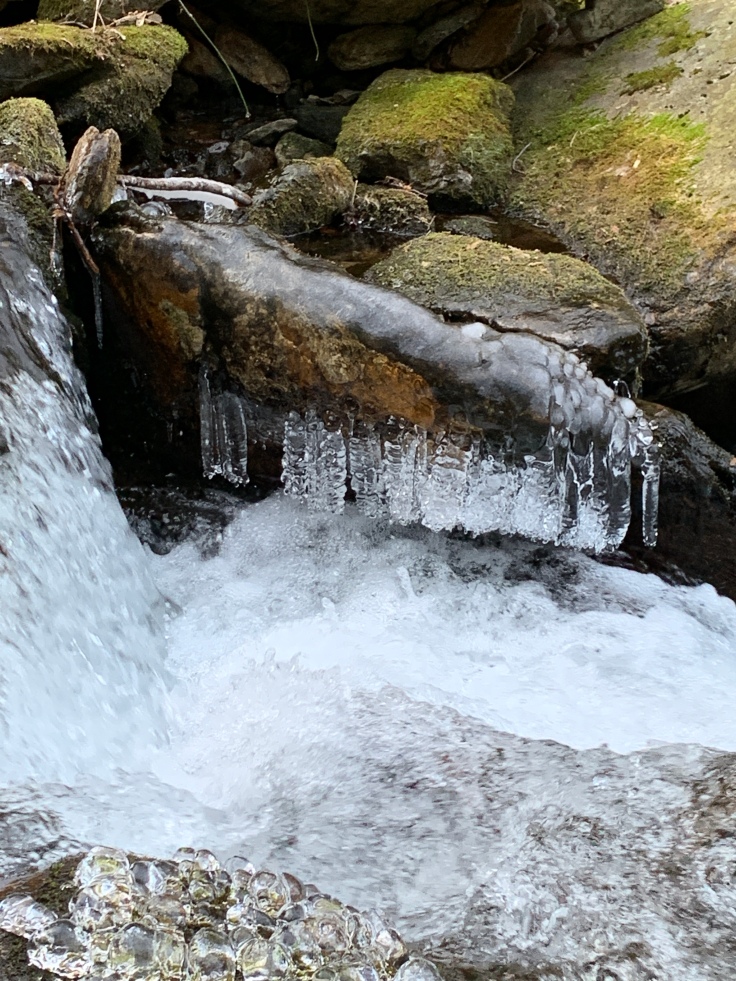 Well now it’s damn near 5 o’clock and she says you think we have time for one more? 😳 nope! I’m pooped! that was 7 waterfalls today!

We get back to the truck and the gps takes us toward Asheville to head home. It’s 3hrs! We are way out there!

Every time we go waterfall hunting we follow Kevin Adams book. Every time I cuss him and his stupid directions because we can never find them! Then we back track and follow them more closely and I have to apologize to him because we are the problem! Not that he hears me. 😊 We decided we probably could not hunt waterfalls with other people. We would drive them nuts! We almost always end up climbing a super steep area that is torture. I’m used to it now. I don’t even complain anymore. We just make it way harder than it should be! Lisa just calls it “more miles.”

Or, maybe we need someone who isn’t directionally challenged! We definitely need a crash course on GPS Coordinates.

One thought on “Frozen waterfall hunting in WNC”