Mike, me, and the dogs

We decided to backpack up to Grassy Ridge Bald and camp. Mike’s first backpack trip. Of course I pack as light as possible and Mike carried tons. I borrowed Sherri’s pack so he would have a real backpack with that anti- gravity back in it.

We left around 10 and headed up. We arrived at the trailhead about 2 and put our packs on grabbed the dogs and we were ready and started up. It’s late June but it’s pretty chilly up here!

The first part of this hike is through a dark pine forest. I love this part.

Then it come out above the parking lot and heads to the top of Round Bald. 5826 ft! On these balds there are only great views.

As we walked toward the next Bald there were an older couple photographing a flower. He said it was kind of rare. A Gray’s Lily. So of course I took a pic.

The Rhododendrons have already bloomed but the wild Azaleas were very beautiful. 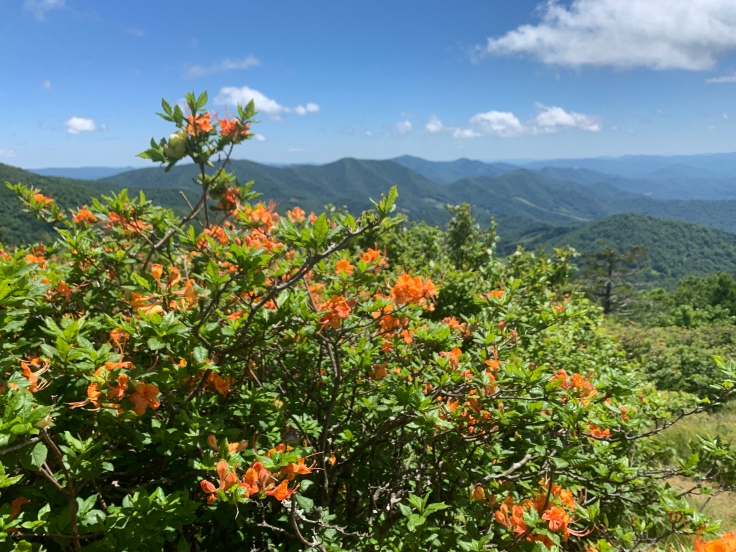 Between the Bald’s are cool trails that remind me of the old movie Heidi.

Mike was doing great. Even walking both dogs. The little Yorkie did an amazing job. He’s about 11 and kicked butt up this trail. Cooper the Rat Terrier mix is a hyper full on muscle dog. No problem.

Next we topped Jane Bald at 5807 feet. We stopped to have a snack and enjoy the views.

The next set of trails would be beautiful if the Rhododendrons were blooming. It’s a very rocky path through heavy Rhododendron and blackberry bushes. A little hard with a backpack if I do say so myself. 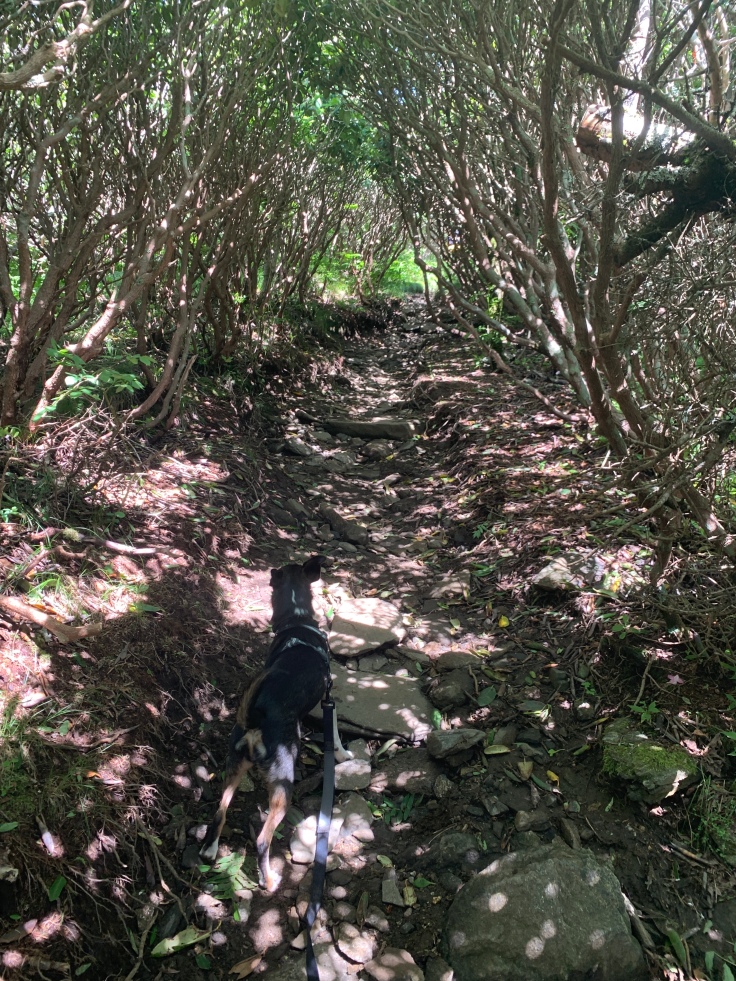 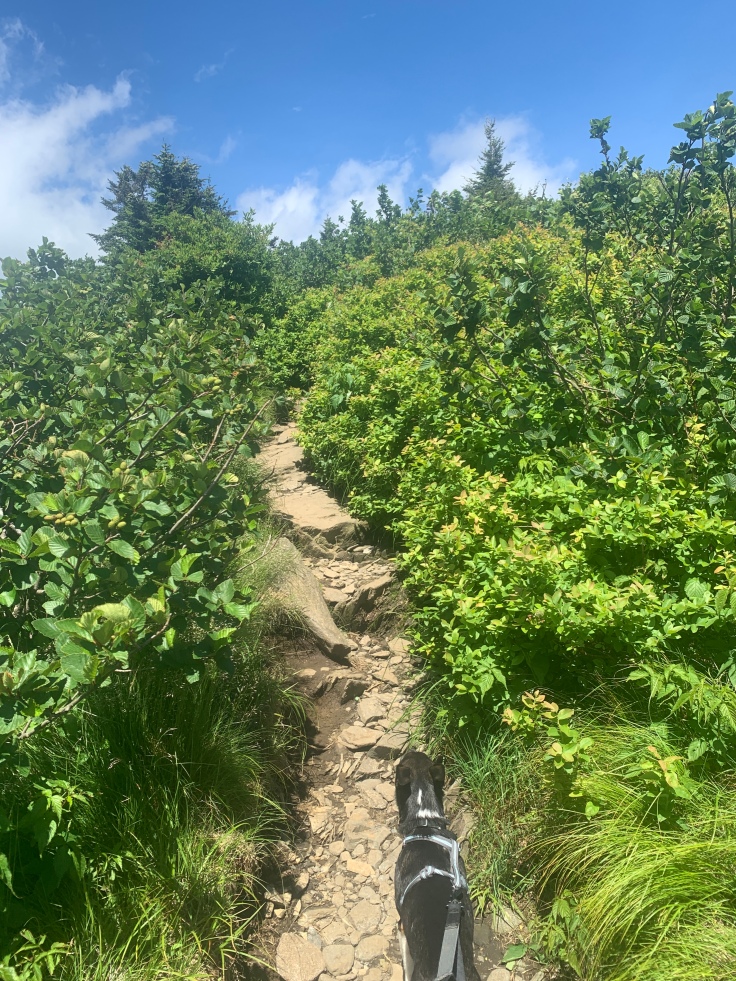 Next is a long upward path to the top of Grassy Ridge Bald. I believe it is about another 500 ft elevation gain and approximately 6189 ft at the top.

We got to the top around 5 picked out a camp spot out in the open that had a fire ring. It had a clump of trees about 50 feet away. It was just under a small hill. The wind really picked up so making a fire was out of the question. The sunrise should be right in front and the sunset right behind.

Turns out the Bivy tent was missing a set of poles. We didn’t check it before we left. I have seen that Dixie – Homemade Wonderlust, a thru hiker uses her trekking poles for tent poles so we gave that a shot and it worked great! 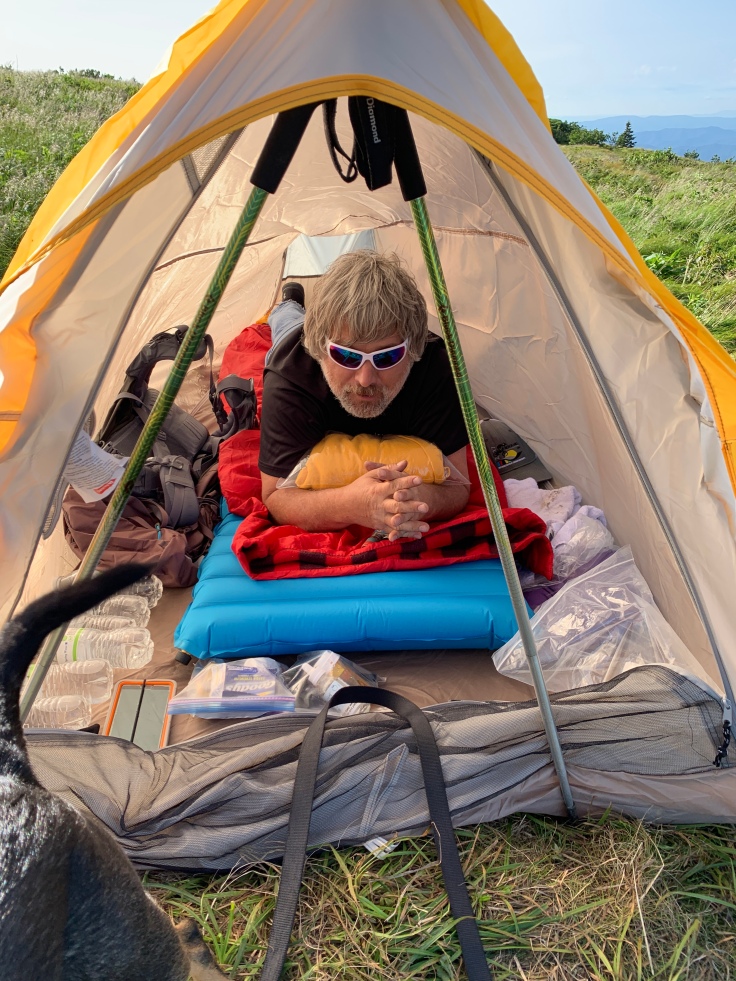 We chilled a bit and wandered around some. We met these guys with the best campsite. It was behind about 5 feet of rock and under a couple trees. It wasn’t facing the sunset or the sunrise was it’s only drawbacks.

From our campsite we could see that giant white Sugar Mountain hotel. I swear that thing can be seen from the moon!

A helicopter was circling our area pretty low. He actually landed briefly on the way up Grassy Bald. We went to see what was up. It didn’t have any markings and it didn’t pick up or drop anyone off? I guess whoever was just practicing?

We put our food in the nearest tree. It wasn’t super high up. After the sunset Mike walked up on a very large deer trying to get at it! Then that deer was right behind my tent.

He moved the bag to a higher tree. I was in the tent because I was cold. I packed and dressed for June 21st. I did not pack for 6100 feet elevation with high winds!🤦‍♀️🤦‍♀️

Mike took some great pics of the sunset. I’m sorry I missed it. 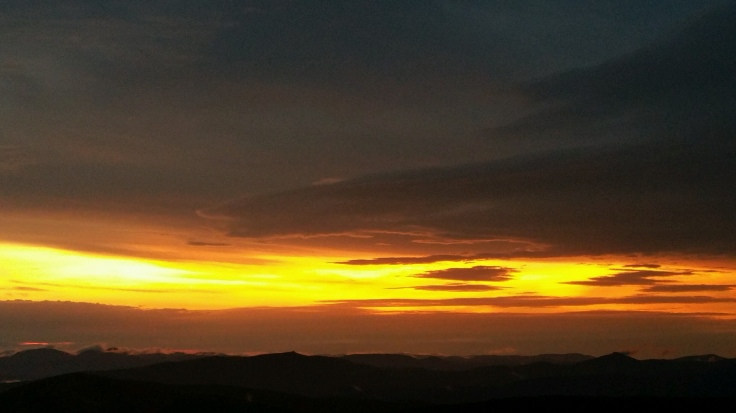 It was well after 9pm and it still wasn’t completely dark. We went to bed and in a couple hours the rain came. It lasted about 20 minutes. The winds were kickin pretty good. I could hear Mike snoring. I was jealous. Then at 1:23 bam 💥 The mother of all storms rained down on us! Thunder,lightning, torrential rain, extreme wind. The lightning was a close as 5 miles. The winds probably 70 – 100 mph no joke! It lasted 2 hours! My tent was folding over me! I used my arm to push the back wall up forever. The more it leaned on me the wetter I got because it was touching me! The farther over my tent bent the more rain that got up under the rain fly! Mike and I could barely hear each other. He said he tent was fine and he was dry. A Bivy tent only has poles at either end not in the middle so I can’t believe it didn’t collapse! I couldn’t even think of coming out of my tent. I would be afraid it would blow away and end up at that ugly Sugar Mountain Hotel! I wish I would have recorded the sound of that storm!

We were literally Riding the storm out. We talked about it. He said just ride it out. I was stressed and he was calming me That helped! I wanted out of there! I kept thinking give me 5 minute and I’ll be under that tree cover. I finally just climbed deep in the sleeping bag (the only dry spot) with the dogs and waited for it to end. That storm finally died at almost 4 am! I asked Mike to take the dogs cause I was moving! And I did! I grabbed my tent and in my socks hauled ass to the middle of those trees! Almost under that food bag! Damn it! But I didn’t care. The wind kept kicking loudly but not to bad under there. I was exhausted.

This is how far I ran! Better late than never? We did not get another storm though. 🤷‍♀️

First light was at 5:41. I think I actually slept for an hour. At 6:23 I woke up and could faintly see a sunrise out my window. Now do I go back to sleep or get up? Idk I thought about it, rolled over and got up. These are the photos I caught.

Well everything was wet so no going back in there. I packed my stuff up faster than Sherri at Mount Rogers! Haha inside joke.

Then I went to Check on Mike and the dogs. They were snoozing great, poor guys! I woke them up I was ready to go!

I rushed his packing along and we headed back to Carver’s Gap. There were other people camping up there. The 2 guys next to us were right behind us! No one slot that night. Some other people left as well.

Our plan is to go to Roan Mountain State Park and the Rhododendron festival. We just getting there earlier than expected. 😁

One thought on “Backpacking Roan Balds”