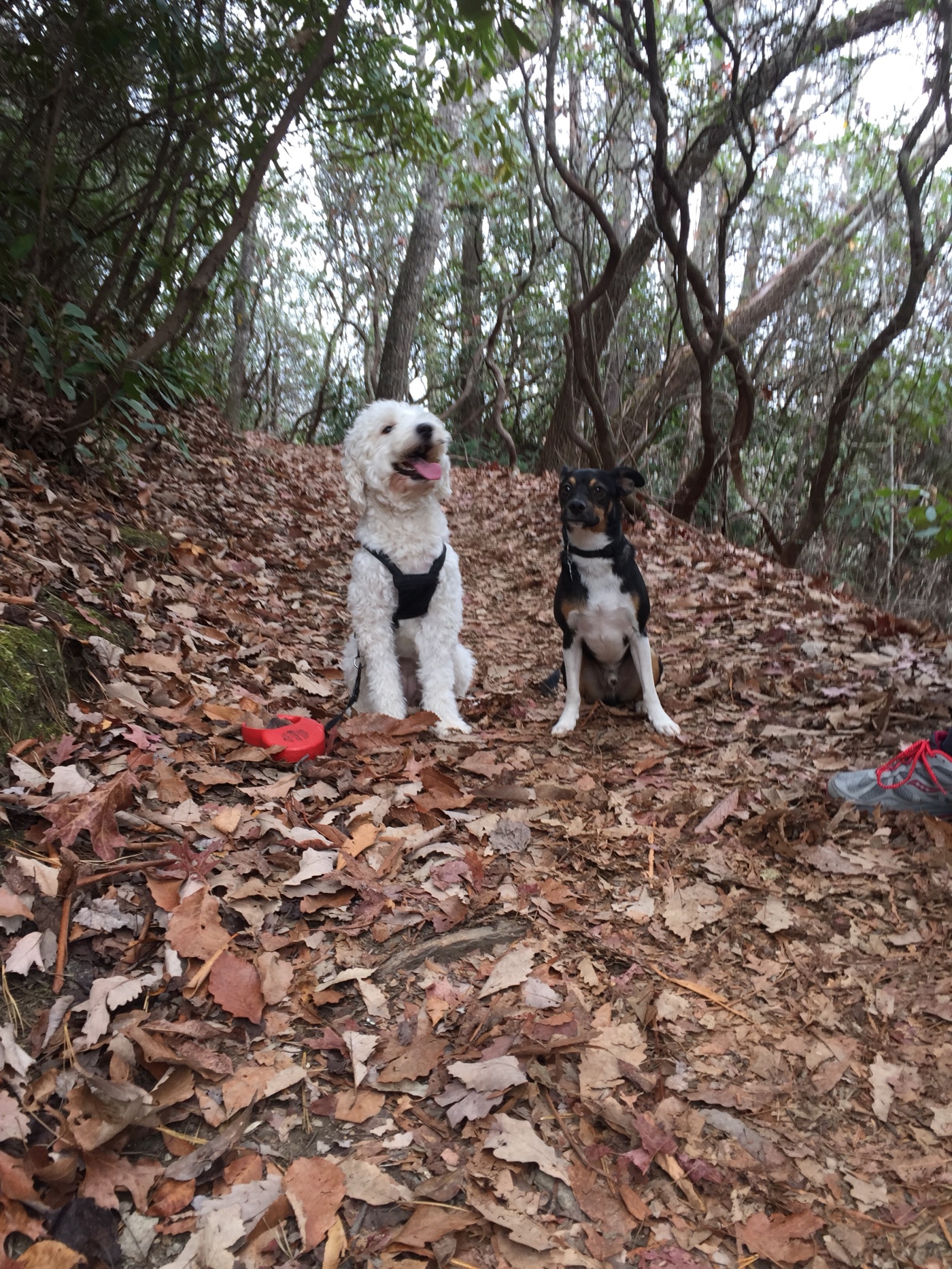 This time I chose the hike. When I hike with Sherri she always researches the hike knows how far and little facts about the trail which is not only comforting but awesome.

Lisa and I on the other hand is just the blind leading the blind! I had no idea how long this hike was or if there were other trails or anything.

Turns out this is a great hike but relatively short but the payoff at the top is awesome.

We left at 8 am and I’m driving we decide to take our dogs. Lisa’s pooch is a beautiful Labradoodle all fluffy and white and mine is a rescue mutt which loves the trail but hates other dogs. They met for the first time in the car and thank goodness hers is a girl. To say they became friends is not true but they tolerated each other well.

When we got to Brevard there was a cycle race or something going on we had to follow this group for miles. Someone behind me was blowing the horn i guess to get them to go single file but it never happened.

It turned out to be a good thing we were following them because my GPS was taking me up the road somewhere else when we spotted the trail head and pulled in. The parking lot was already full so we parked on the side of the road. A car coming south did a u turn to park behind me and when they did 30 bikes had to put on breaks just so they didn’t smash into that car. Not gonna lie I screamed out loud! The guy in the car said he didn’t see them but that those bikes were getting on his nerves anyway. 🤣🤣🤣🤣

So here is the trail head.

And by the way when you are on the Blue Ridge Parkway there is an overlook that is for Looking Glass Rock. It looks like this.

We have the dogs on a leash and we take off up the trail. It’s a nice trail for a good while. I did get winded a few times. Turns out it’s 3.2 miles to the top.

We meet an older guy he looked about 80. He tells us that there is a helicopter pad to the right and the trail ends about a mile past that. Good thing he said that cause I would of just thought it was a giant rock!

Apparently when people fall off this is where the rescue helicopter lands!

I let my dog run free for most of the walk. He is an excellent trail dog never wanders to far always likes to lead but as I said his main downfall is he does not like other dogs and will start a fight with a dog 10 times his size. Lisa let Coco off her leash and that dog takes off ahead to explore. She always comes back but it makes Lisa nervous anyway. That dog is so white that she stands out in the forest because nothing else is that color! We keep walking enjoying the trail. There isn’t many people coming down yet because it’s early. But each time we hear people I play dog or no dog. If they have a dog I put Cooper on the leash. We meet one girl with a dog that tells me Cooper is a Rat Terrier mixed with Jack Russell. (Seriously explains a lot) she says this breed doesn’t like other dogs. I googled this later and she was dead on.

He loves people though and will stop at every person. I kinda felt bad for him because he looked like the nerd no one wants to dance with next to Coco! Everyone was look oh so beautiful then smile at Cooper. Miss Coco couldn’t give people the time of day she was busy exploring. As always the nerds come out just fine. Cooper wins them over with attention! 🤣🤣🤣🤣

Toward the end of the trail the dogs are off the leash and when we come to the clearing all you can see is sky so it’s pretty clear it’s all down hill!

We call the dogs back and put them on the leash. Good thing to because I can see why they need a helicopter pad nearby.

The views here are beautiful. The trees have lost most of their leaves so there is not a lot of color. We sit down to have lunch and tether the dogs to our backpacks.

We decide to venture down to take pics toward the bottom one at a time. As soon as we do the dog tethered to the pack moves and our water bottles go flying down the rock and over the edge. That’s how steep this rock is. There are tiers down there though and a guy offers to climb down and get them. Since I hate littering I’m more than happy about this but he girlfriend is not so pleased!

We throughly enjoy this view for a while then head back down the trail to go find Looking Glass Falls.

It’s just as steep going down of course and I try to let cooper run but it’s later and there are a lot more people going up now. Alltrails always says moderately trafficked trail. This I would say was highly trafficked. I know prefer REI’s app Hiking Project. It also lets me download trails to my Tom Tom free unlike Alltrails. 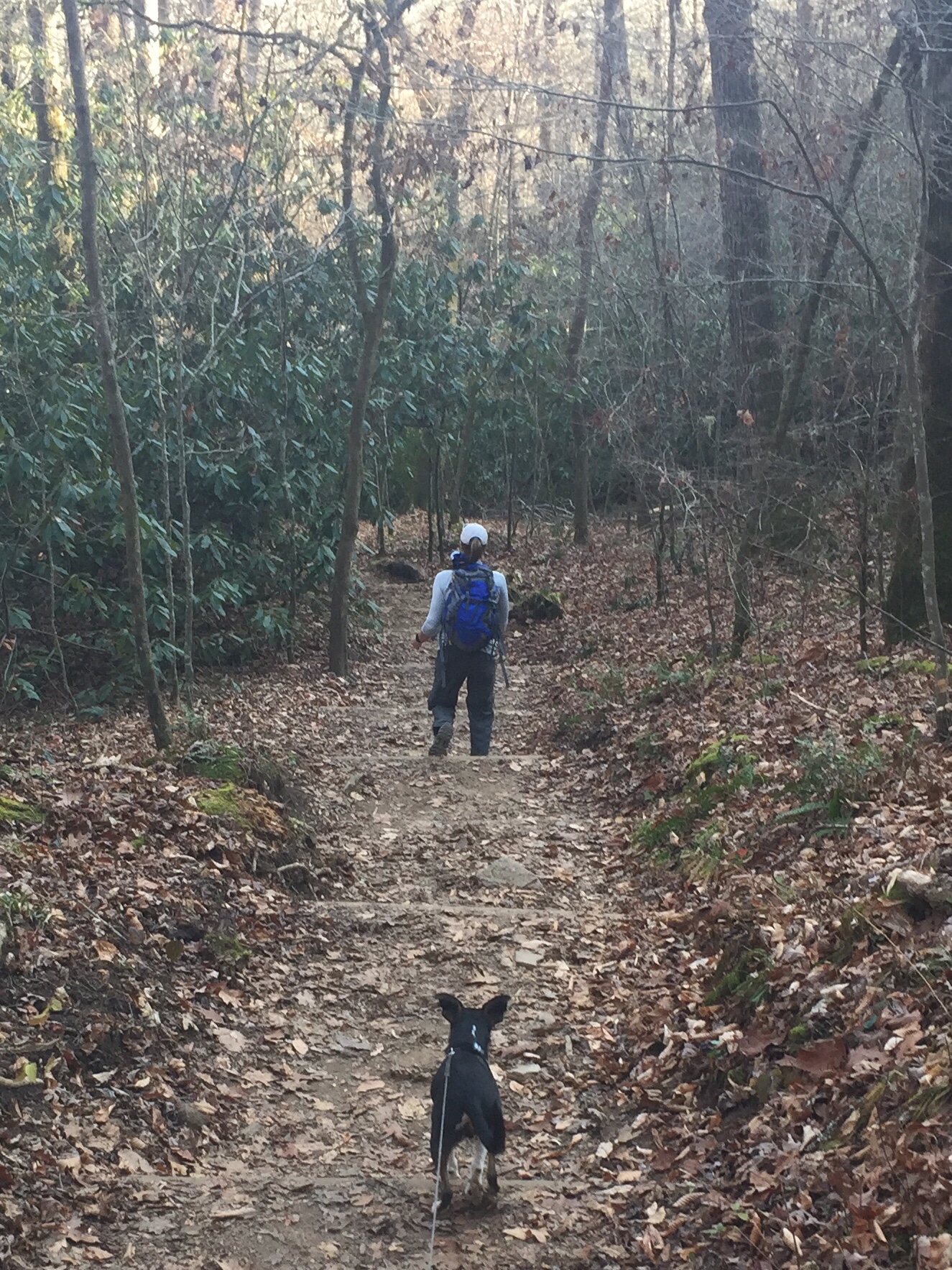 The parking lot was still full but the road in both directions are full of cars. We turn around and head back and turn towards sliding rock and come to Looking Glass Falls. I wish I had a memory because I’ve been here many times and didn’t know it till we arrived.

The Falls is on the road do we do what all the tourists get out take the dogs and go for the photo ops! This is s beautiful falls. 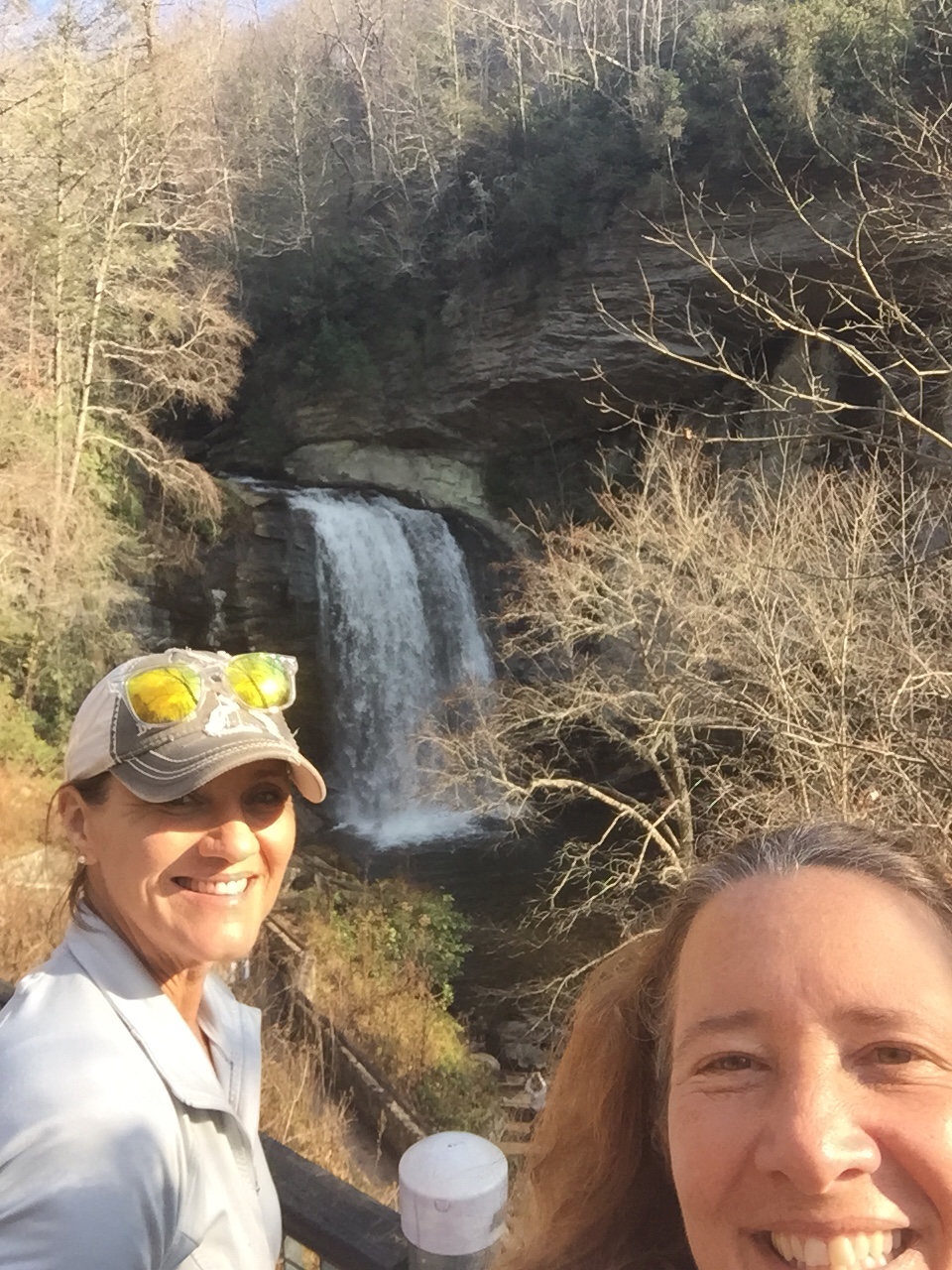 Cooper loves water but didn’t want any part of getting in the stream.

Lisa took this one of us that I love!

After this we got back in the car and headed home. Halfway home Lisa says she’s hungry we head towards Gastonia to go to amber Jacks for seafood. The traffic is bad so we go towards Clover and hit Palmetto Seafood and have Blackened Shrimp skewer and fried shrimp.