Mike, me and the dogs

We are camping at Betsey’s old Country store in Mortimer NC. It is North of the visitors center and south of the Blue Ridge Parkway. It’s a long dirt road far away from where ever. If you haven’t been there you need to go.

We arrived mid afternoon Friday and set up camp. We set up upfront because the band will be on stage Saturday night and we want to be near and the spot behind the pond was taken by a large group of guys from Croatia.

We just chilled all afternoon had a fire, ate some hotdogs for lunch and pork chops for dinner. I did not forget my mattress this time. We turned in early and got a great night sleep.

I saw a girl on Facebook post this breakfast and I tried to duplicate it. It was a baguette hollowed out and filled with scrambled eggs, bacon, cheese and onions wrapped in foil and cooked on the fire. It was pretty good except the bread started to burn a bit. Prob needed to cook slower. These are hers no pic of mine.

Then we packed up some waters and headed all the way to the other side of the area to visit South Harpers Creek Falls. The shortest route was off road 58. It’s an even longer dirt road off Pinola. Probably close to 30 minutes away but still in the Wilson’s Creek area. It was a nice trail that for the most part was level. It was 1.5 miles to the falls. It is on Harpers Creek trail. 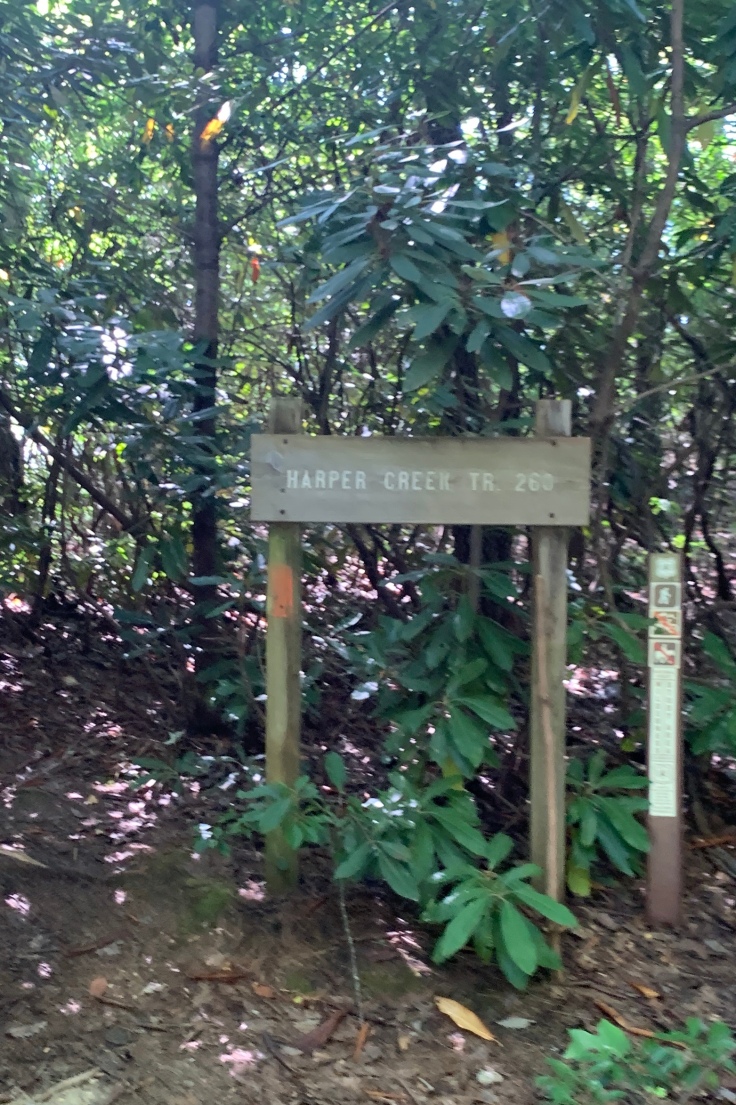 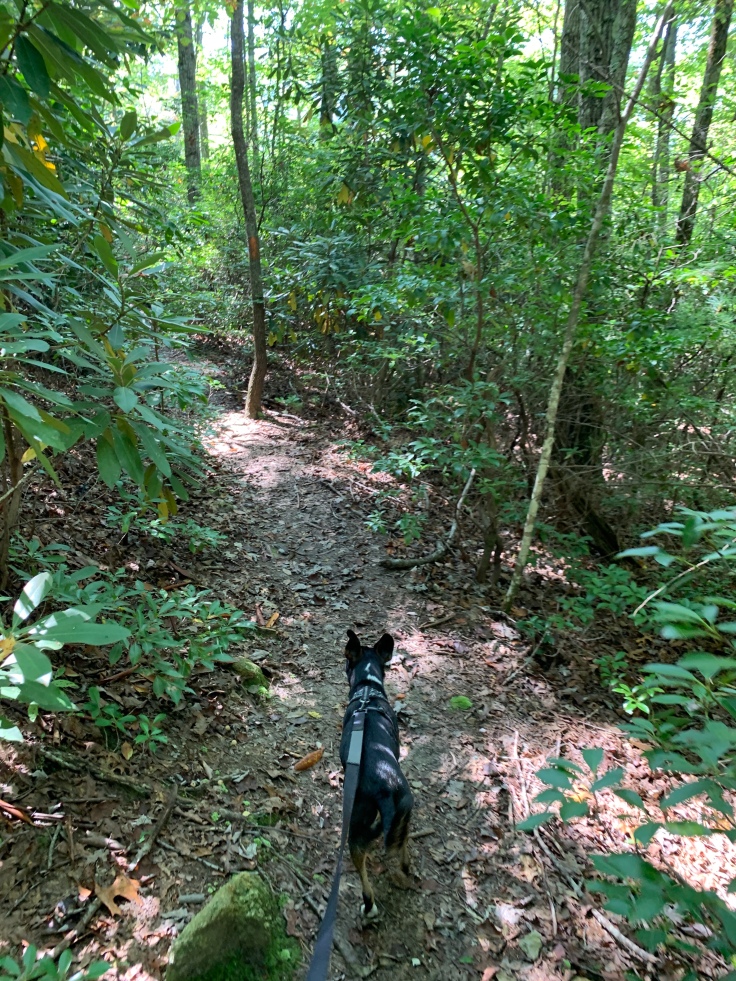 We got to the top of the falls. From here you can tell it’s a very tall falls because of the rock wall and the slope of it but there is no way to tell just how big it is from here. 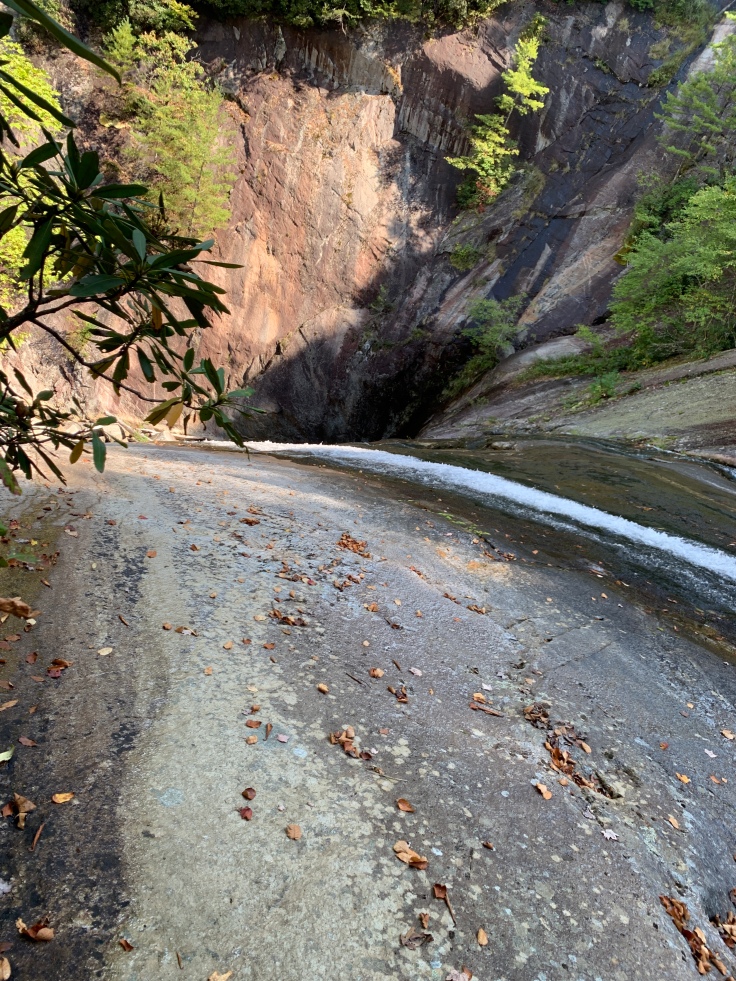 I didn’t read up in this one so I didn’t know where the best view was. I tried to go below and get a better view while Mike and the dogs waited up here. The trail is in bad shape below here. I tried some side trails but got nowhere and went backup. Just then a guy came up the trail and told me to go up the last trail junction to a viewing area above that rock wall. We went back and turned up trail 277 and crossed the creek and headed up the trail. Definitely more elevation but lots of switchbacks.

We encountered a very large group of Hispanic men. There were about 100 of them all carrying flags, backpacks, water etc. wearing orange shirts. The leader called out instructions and then another down the line called out and so on till the end. Then they all stepped aside. We walked past each one in a nice long line. It was amazing. The leader said they do this trip once a year and they were an adventure guides men’s group.

They went back towards where we started and we continued to the overlook. The overlook would be easy to miss. It requires a side trail. It is an amazing spot. It was least 200 feet up with a great view of all of S Harper Creek falls.

It also had a great view of Calloway Peak at Grandfather Mountain.

We turned around and headed back to the trailhead. We caught up with the men again. Every so often they counted off. Uno dos tres up to 10 (diez) I figured 10 x 10 equals 100 guys. The leader shouted instructions again and every tenth man or so many would relay it to the back. I have no idea what they were shouting because it was all in Spanish. Back at the trail head they had a uhaul to bring them back to their camp. 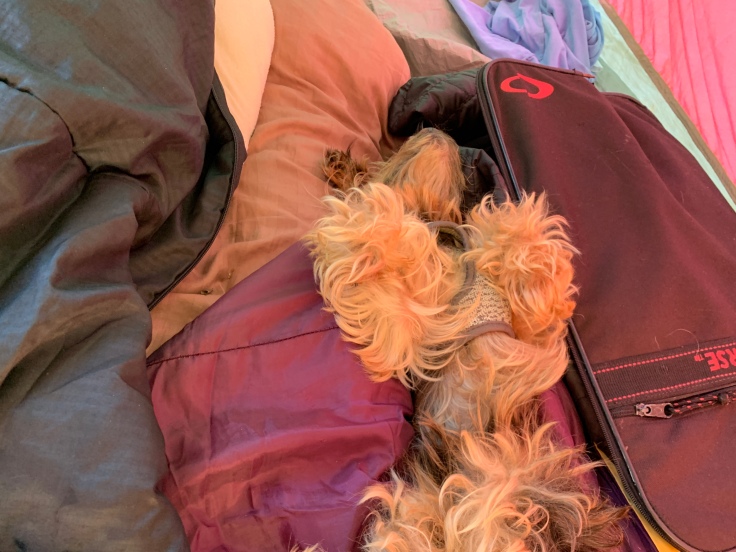 We went back to our spot and cheeseburgers were ready. We got chili cheeseburgers and hung out. We met a bunch of the neighbors and just enjoyed the rest of the afternoon. The Yorkie was beat after his 5 miles. He slept forever!

The band started about 7. It was the Jaime Trollinger Band. They were rock and blues. The guitar was awesome and the guy playing the harmonica was awesome. Everyone had a great time dancing and listening to music. They played till 10. After that I went to bed.

We woke up lazily and got out of the tent and packed up.

I want to go to Steels Creek Falls so we decided to go out Pinola Road and instead went to Edgemont where there is an old historic community store and a small community. Then down Roseboro road 8 miles to the parkway. It was a very cool ride. Past Gragg Prong then up up up. Beautiful and remote! From the BRP we took it to Linville Hopped on 181 toward Morganton. The gps had me turn on a hard to see dirt road. 3 miles down it it dead ended at the trailhead. I’m not even sure why this road is there? There is nothing in it and it doesn’t go anywhere? 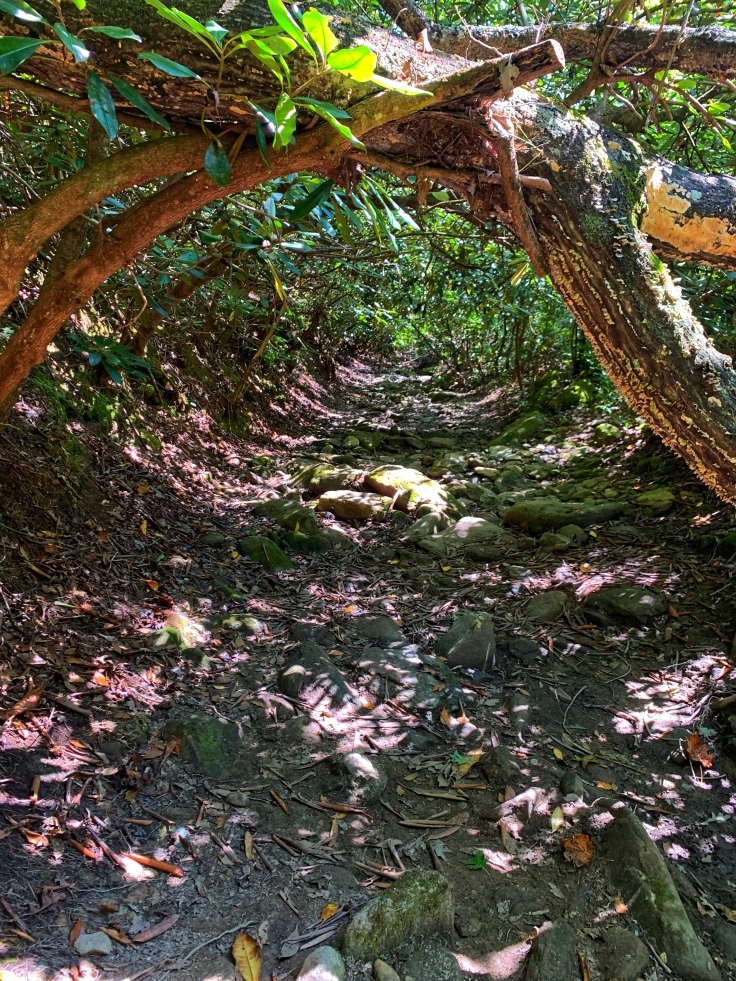 The trail crosses steels creek then turns right on the MST. In a moderate uphill climb along the water I can finally see Steels Creek Falls through the trees. 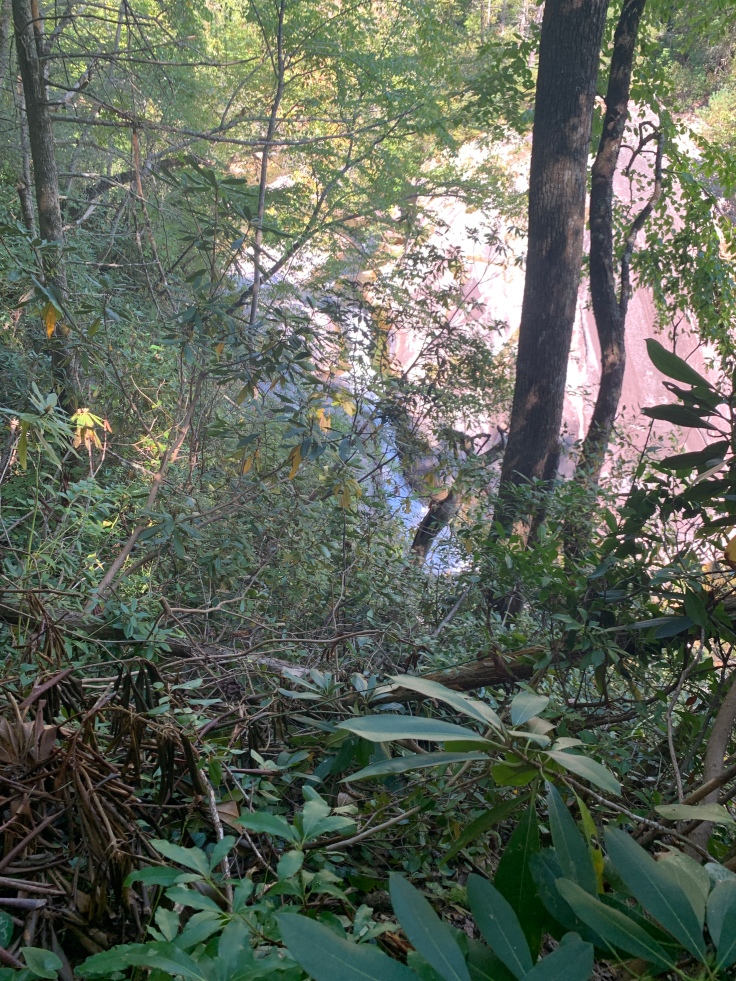 I look for a side trail. Mike held the dogs while I climbed down. A rope was tied to a tree so I used it just Incase to go down on the rock and get a better view. So beautiful.

We didn’t stick around to explore. It’s been a long weekend so we hiked the mile and a half back to the car and headed home.

Spending the weekend on dirt roads makes for a very dirty car!

What a great weekend. 😁