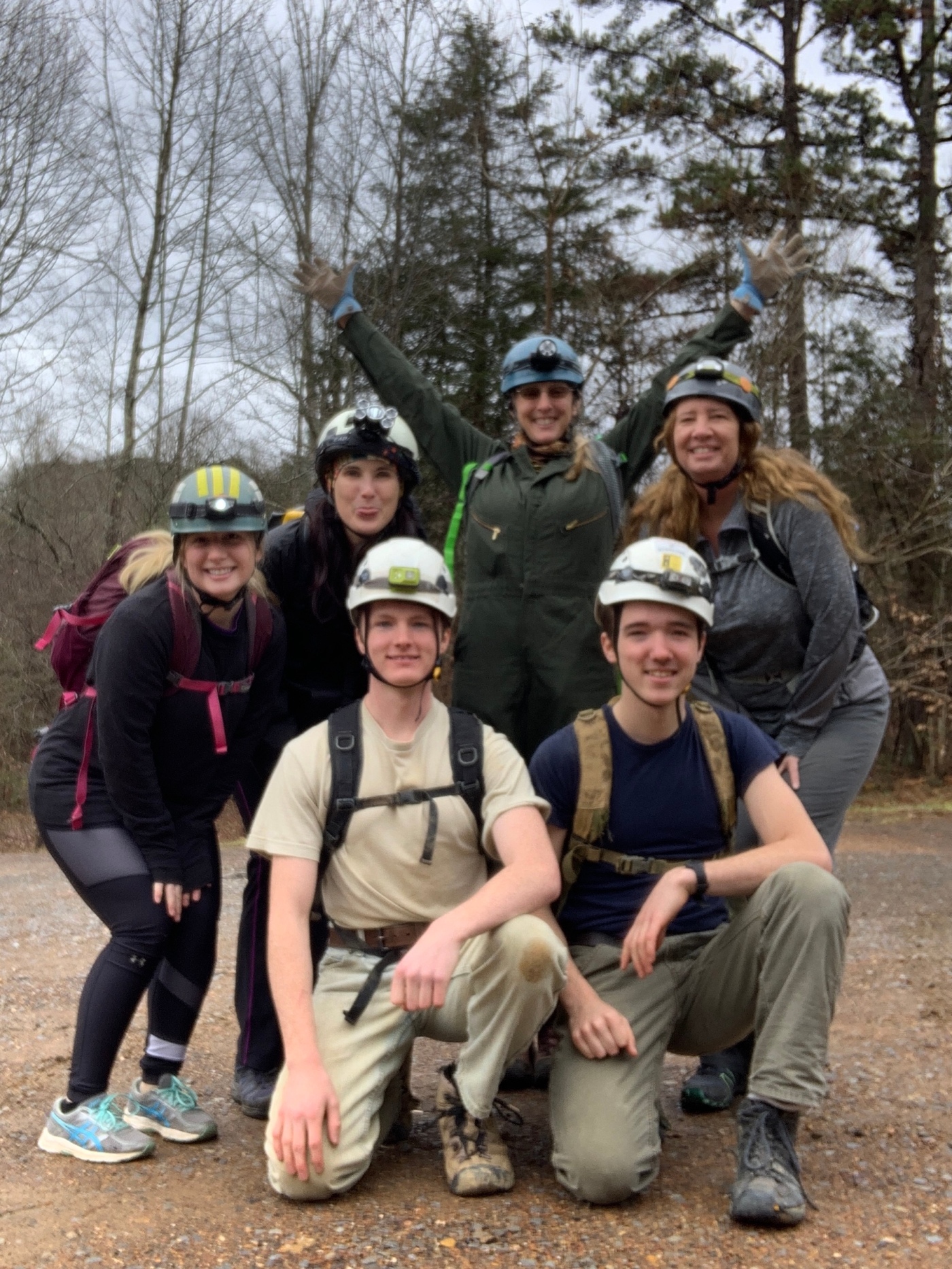 This cave is just outside of Johnson City Tennessee. I asked my youngest Daina if she wanted to go caving with me and she said yes. It was the day after her semester and finals ended. She probably would of said yes to anything about now! I went to Clemson and spent the night so we could drive up together. We were going to meet the rest at the cave at 10 am. We made the 3 hour drive up and met at the entrance. When you get there you have to sign a waiver and pay $8 per person. Then to the parking lot. There was only 1 car there meaning we would be the only 2 groups in the cave so far! They were coming out as we went in. They camped in there the night before. We had this cave all to ourselves.

The trail to the cave was right by the car. It lead to a small stream and a massive stone wall. The entrance to the cave was to the right. This is the water coming out of the cave.

Nick and Jon have been here a couple of times and were going to guide us. They didn’t know what they were in for! 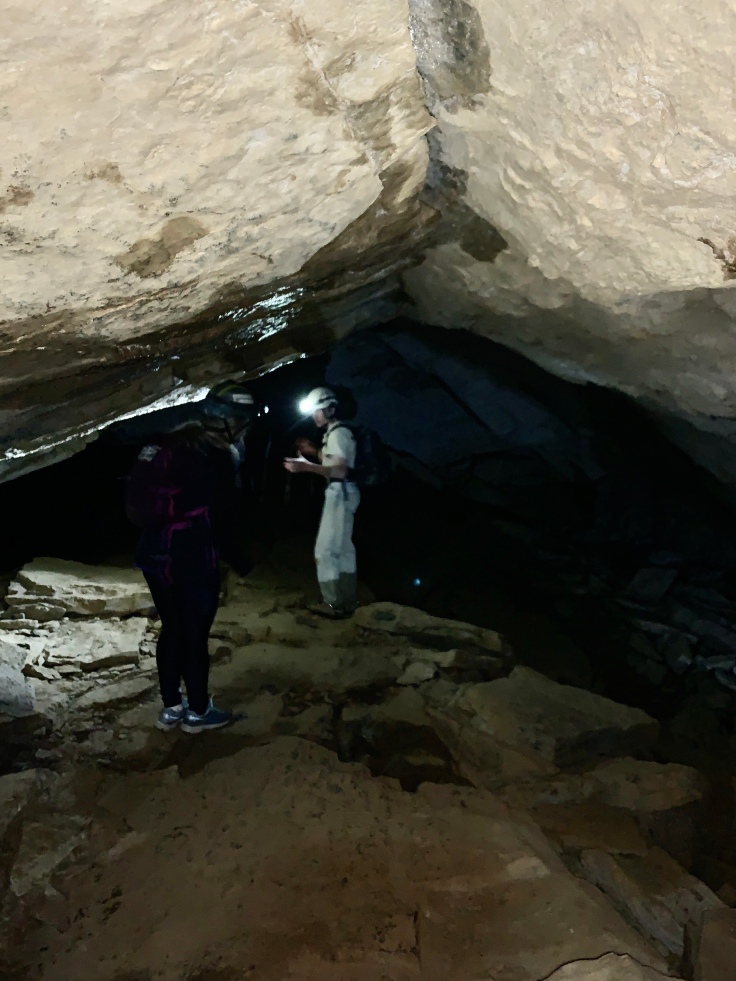 The entrance is the last time there was any light that didn’t come for our headlamps. That light lasted about 60 feet then you had to learn to adjust your sight by the headlamps. Mine seamed quite dim compared to theirs!

Jon spotted a bat on the ceiling and one flew by otherwise we didn’t see anything else.

Walking through the cave was kind of like climbing up a muddy rocky riverbed in the dark. Everything was kind of slick, damp and the mud was kind of like wet silly puddy. We climbed up over rocks. There was some large puddles of water that we had to cross. The girls attempted to stay dry on the first one. Nick and Jon helped us cross on the rocks. 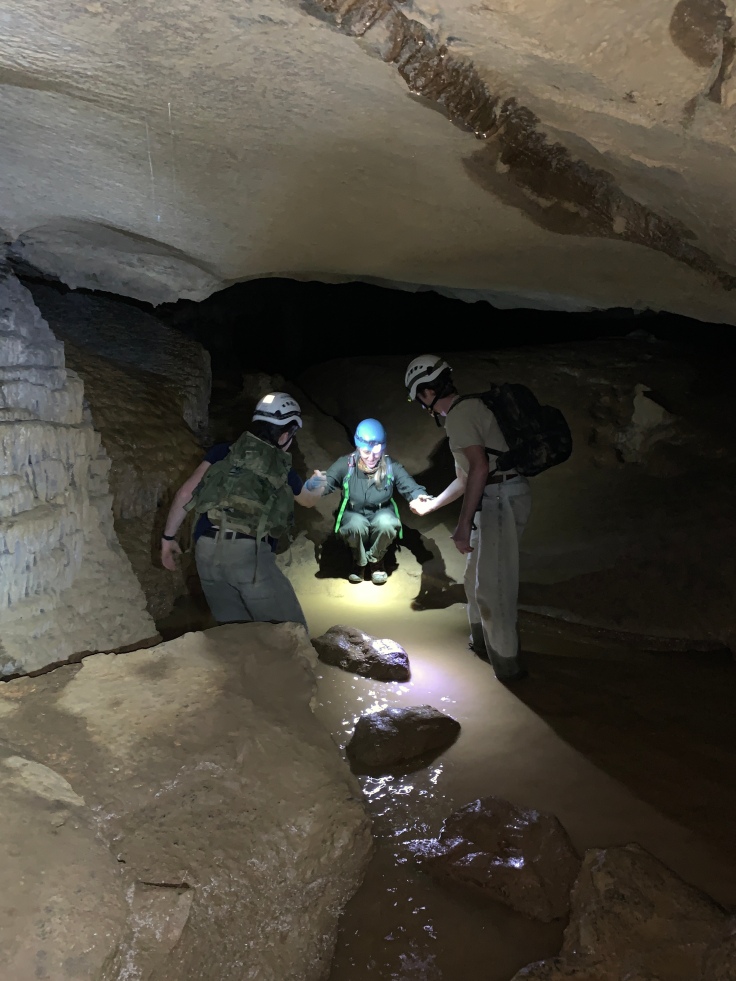 That was kind of insane because on the next crossing we realized we just need to get wet!

There were a lot of awesome stalagmites and Stalactites. A stalagmite comes from the ground up and a stalactite grows from the ceiling down. These are living things and they grow. 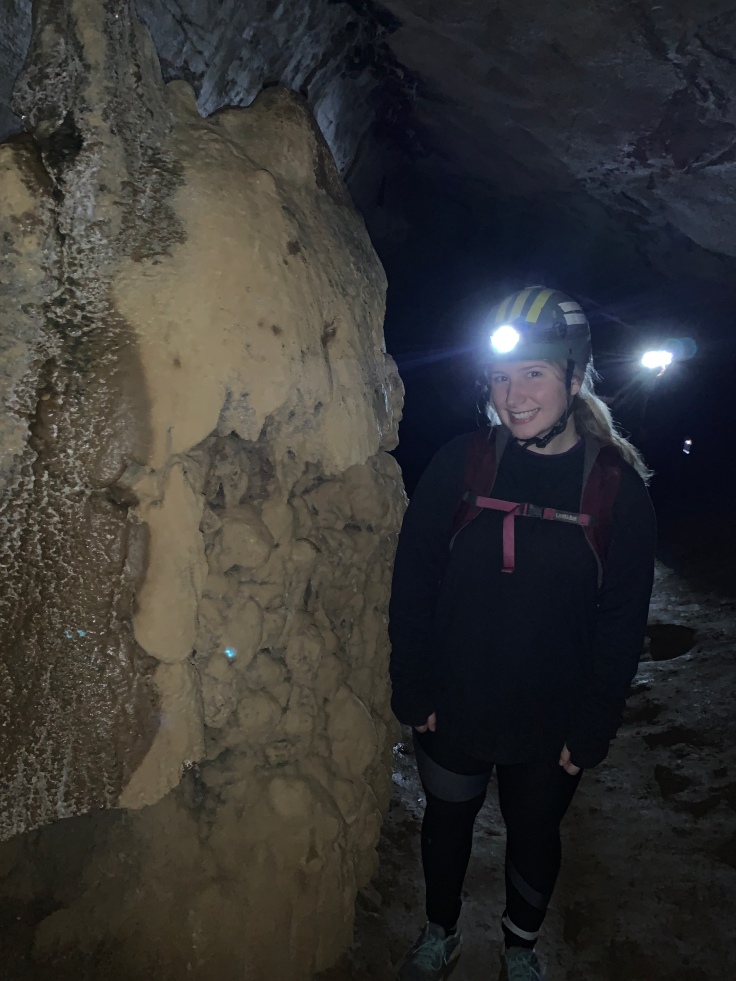 There were some really cool things to see in here. There were also big sink holes that you need to be aware of. Some deep some not so deep.

We came to the next large puddle and just took the plunge. It was only ankle deep. The water was clear. Until we walked in it of course! 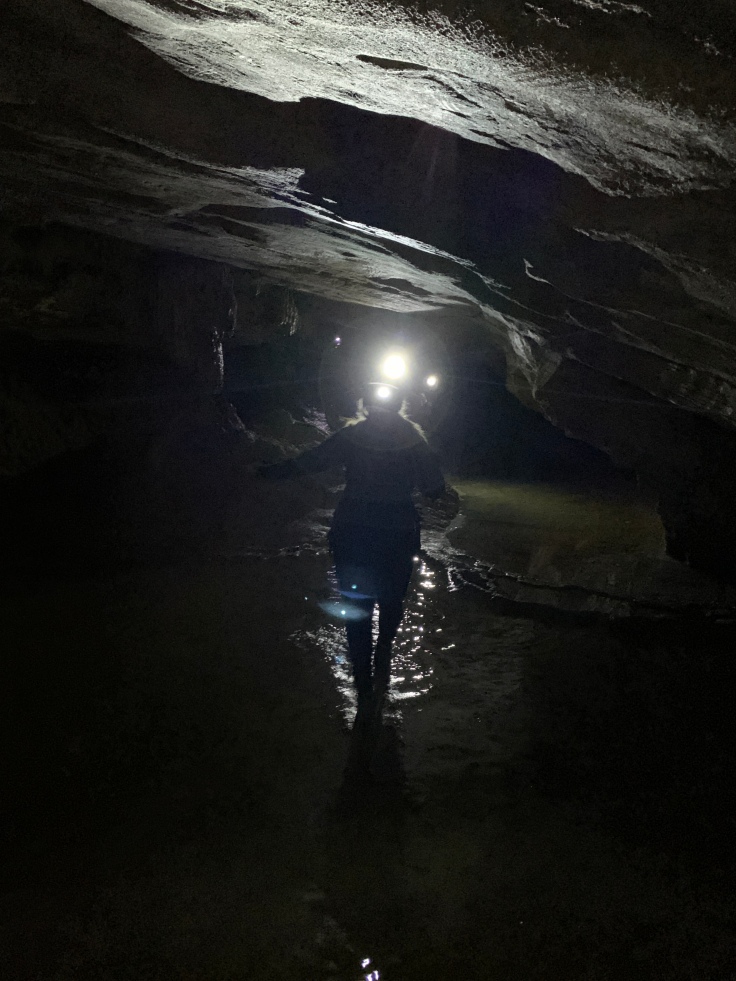 I never went caving or talked to anyone who has other than seeing Nick and Jon’s pics. I didn’t know what to expect I didn’t know if it was flat or we would go down or what. Was it big or small would be be walking or crawling. It had a little of all of that! What I really didn’t know was how hard it was to take pics in the dark. After the flash is when you can really see what your taking a pic of. It was also 55 degrees in there.

Nick was like a spider. If he could find a small space to climb in he would. Idk how he knew if he could fit or if it was safe but he didn’t miss a thing. None of us were going to join him!

Every up, down, twist or turn was so cool. 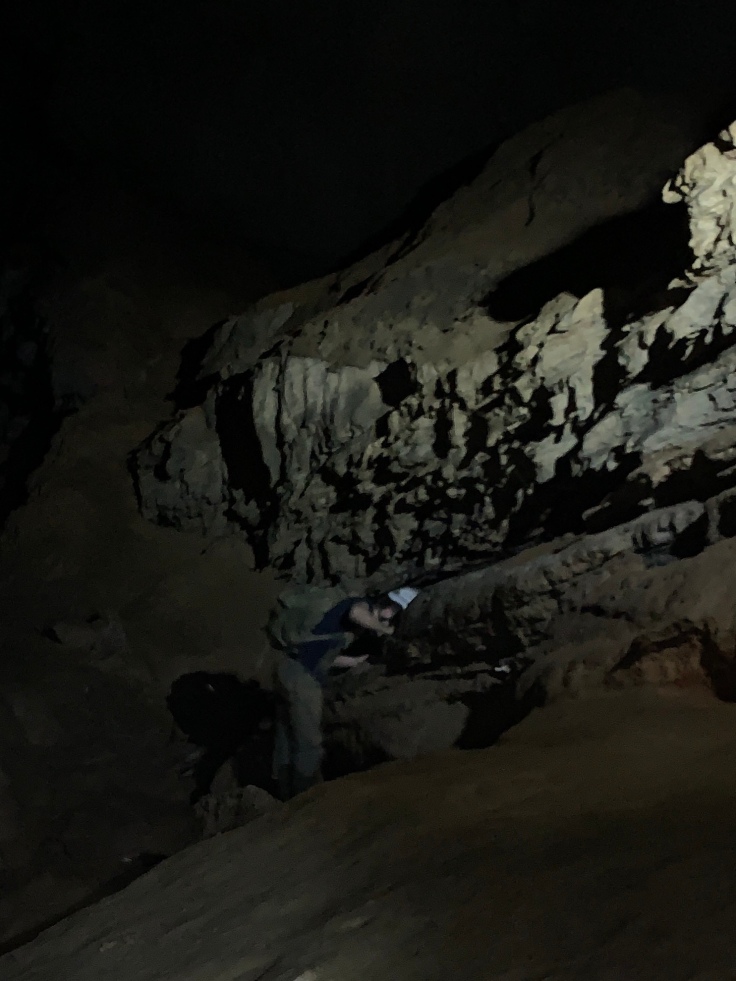 One of my fav pics was the one where the water was coming down from the ceiling. Jon’s headlamp made it pretty cool. 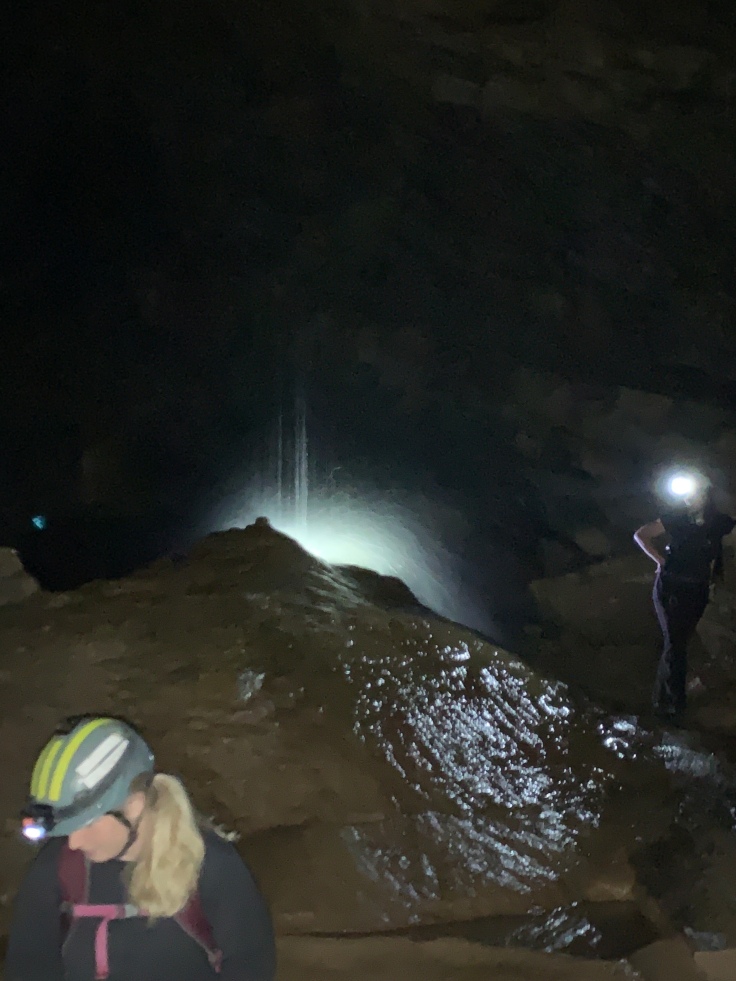 We ended up along side the river to have lunch. We all turned our headlamps off. I don’t think I’ve ever seen such darkness before! Pitch black and the only sound was the water dripping.

From here we have to go up. There are two technical climbs ahead. We have to climb and stand on a 4 ft tall muddy rock and use our upper body strength to pull us up to the next level. Well none of us had enough upper body strength! Brandi went first. There was no where to put her feet. It was all upper body! Jon climbed up and helped pull us up while Nick tried to push our feet. It was quite comical. Jon really had to work. One by one we made it. I went last. Then the next climb. Daina and Nick were ahead and Daina couldn’t get herself up. Then we caught up and Jon went on top to pull and Nick pushed! All upper body there was one small rock to put a foot but you had to be super flexible to use it like Christi! Poor guys! We really made them work hard! It took quite a while. I went last and damn if I didn’t get a large Charlie horse in my calve! I get them way to often!

I’m not sure if this climb would have been so difficult if we weren’t in the dark. I think part of the issue was the unknown. But we all made it and continued through the cave!

There was a cool lake like area that I thought was awesome.

Next we entered a big area that was so cool. Nick said someone had gotten married here. I would of called it the music room because to me it looked like a stage and a giant pipe organ. We took a ton of pics here. 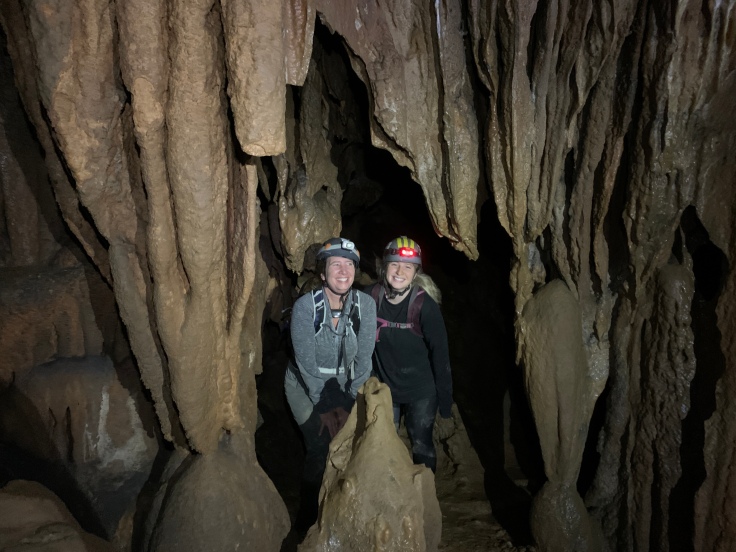 From here we had to decide whether to go back the way we came and climb down that difficult climb or go back through the river. We agreed to go to the river. It would come out right where we had lunch.

We had some tighter areas here. We went through a pretty low area on our hands and knees. I don’t think anyone got a pic of that. Then a weird climb down and around some large rocks.

Then Jon went down a large hole. I could hear water down there.

We came to the one area where it was about two feet wide and on either side was a large hole. Perspective is so weird. Especially in the dark! We crawled over this area for fear of how deep the hole is because it’s dark and Nick ends up standing in that hole! 🤦‍♀️

On the other side of this is a very small hole that is a long tunnel. Nick went headfirst down it. Too crazy! He had to back out of it. Brandi has a video of it! It’s crazy. I saw someone post on his pic that they went in did a summersault and turned around to come out headfirst! I looked in there! It looked impossible! Jon was trying to push him back in! The next is him using his arm to help him get back out! 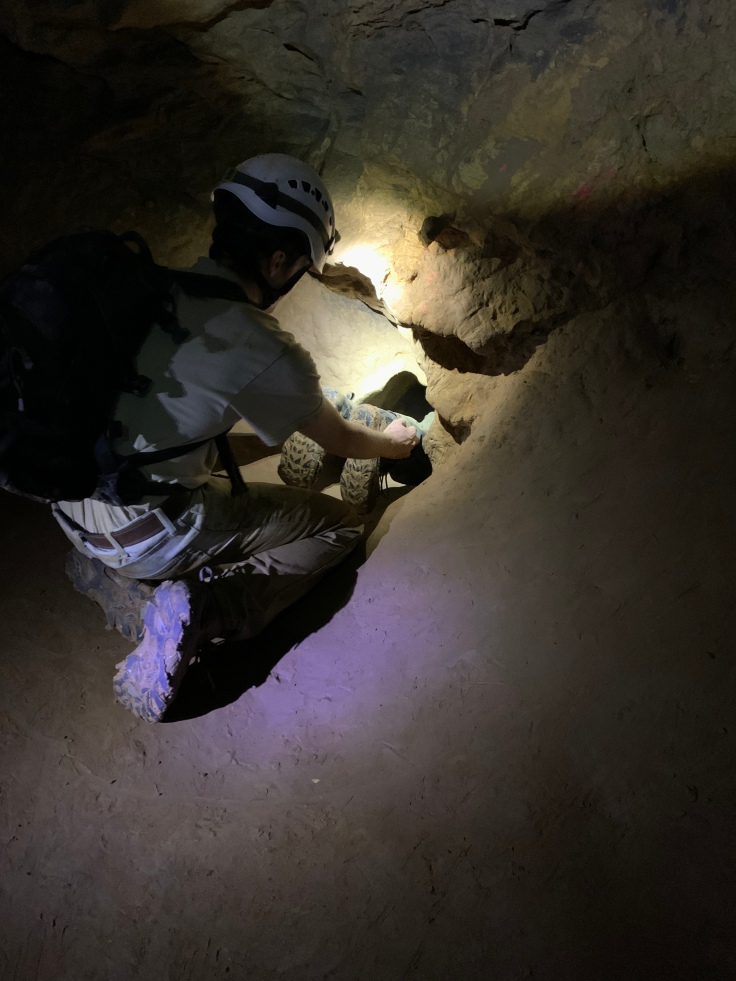 After this it was down to the river. Nick got in first. It was to his thighs. We all got in the river and started walking. It varied from ankle deep to knee deep. Sometimes the ground was soft like silt and we sunk a little. It was super cool walking through a tunnel in the water! 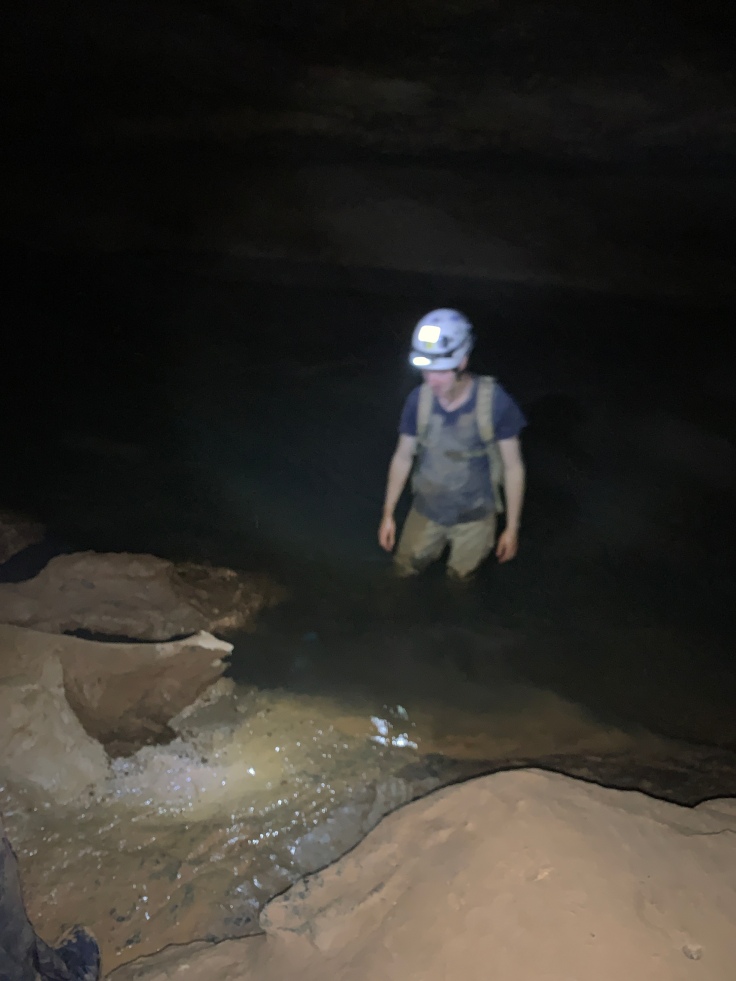 I think it was prob 1/2 mile in the water and we were back out again where we had lunch. We headed back toward the cave entrance. I took this one that I like a lot also.

As we were walking I said “I wonder if it’s dark out or what time it was” we all took a guess and turns out it was 3:15. We have been in the dark cave for over 4 hours!! According to my GPS we went 2.4 miles. I’m not sure how accurate that it though.

We came out very dirty, a little tired but very exhilarated! Nick and Jon did an awesome job guiding us! We laughed so hard and had just a great time! Daina said she didn’t know what she was getting into and it was a lot of fun but this was a one and done! 🤣🤣 I guess she is gonna hike above ground from now on. 😄😁. I think I would probably do it again. 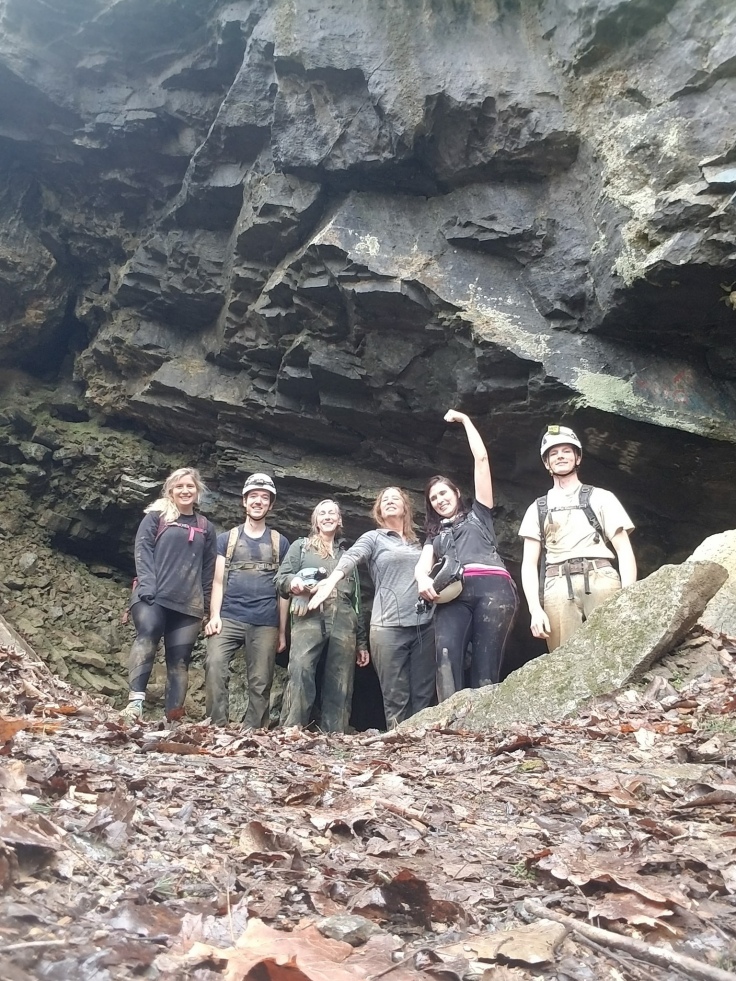